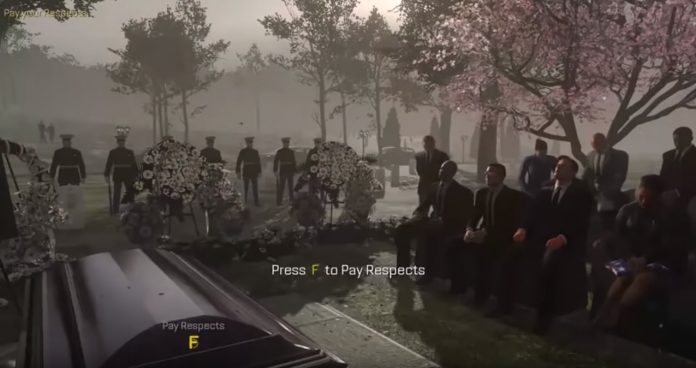 In this post, we examine the Press F to Pay Respects Meme, evaluating its origin, dissemination, and also 21 of the best memes that emerged from this viral, gaming catchphrase.

In recent years, the phrase “Press F to Pay Respects,” gets used in different ways. To some, the phrase functions sarcastically, especially when a streamer or speed runner experiences an epic fail. However, there are some who will use the phrase genuinely in times of grief. But what are its true origins?

The mundanematt YouTuber took a deep dive into the meme- watch below for the complete backstory:

In the year 2014, the “Call of Duty: Advanced Warfare” got released. In this game, you play as Jack Mitchell a US Marine Corps. You fight invaders from South Korea and other terrorist organizations. At the end of the game, Private Will Iron, Jack’s best friend dies. Jack also losses his left arm in the action.

After the mission, you attend Mr. Iron’s funnel. During the cutscene, the game requests you to press F to pay respect for Iron as a fallen soldier.

The cutscene received a lot of criticism from players and the media after the release of the game. Most of them claimed that it was a forced element that did not cohere with the memorial services.

Despite this, the cutscene generated a lot of gifs, Vine videos, YouTube memes, create hilarious comics, and tons of Reddit threads with people pressing the F button on their keyboards in gallant salute to different ‘fallen’ heroes. Strangely, it’s sometimes used seriously- but from what we’ve seen, it’s typically used in a joking fashion. Reddit was huge in popularizing this meme- so big that the Out Of The Loop subreddit was called in to help explain the situation:

Why are people making fun of ”Press X to pay respect” from CoD: Advanced Warfare? from OutOfTheLoop

Conan O’Brien even got into the act during his Clueless Gamer Segment:

In typical Conan fashion, he wasn’t impressed by the Xbox game and especially criticized the  “Press X to Pay Respects” scene.

Another popular YouTube meme to come out of all this was created by the NFKRZ YouTube channel who produced this seizure-inducing video of “Intense Respect Paying”, which climaxes with a psychotic funeral sequence towards the end of the clip:

One of the top posts on Reddit that uses this phrase ocurred after the death of Stan Lee, the Marvel impressario. It showcases him in a Lego form and many Redditors lined up to press F to pay respects to this comic entrepeneur.

Press F to pay your respects from gaming

Other users memorialized the death of the Demon’s Souls Online Service, which apparently was terminated.

27 years ago, the USSR officially ceased to exist. Press F to pay respects from HistoryMemes

The ironic folks over in the History Memes subreddit paid tribute to the the USSR’s demise.

Press F to pay respect to Elon from dankmemes

A hugely popular post on Reddit asked Redditors to pay respects to Elon Musk who became the victim of a meme. The post reads “When you’re asking for memes but you become the meme”, showing a pensive, somewhat melancholy Musk considering his fate.

This one’s a bit confusing- one Redditor speculated that all these components were discarded because the technician was drilling holes for custom water cooling.

This one goes over our heads, but according to a Redditor, the guys on first panel are Ugly Bastard and NTR guy. Though the Redditor isn’t sure who the third person is behind them with glasses.

If you can interpret the Scottish parlance here, the screenshot commands you to press F to pay respects for an impaired wheely bin that apparently was maimed during a “gaff party”.

A lot of Twitch, YouTube and Discord chats now use this phrase in moments of ironic and real grief. A good example is with the recent incident of shooting at Jacksonville. The shooting left at least two dead and many others injured. And during the live tribute stream, the “Press F to Pay Respects Meme,” phrase filled the sidebar.

The Press F to Pay Respects Meme is a pretty funny meme that doesn’t seem like it will go out of fashion any time soon. It keeps getting revived in various ways and seems to have long-term sustainability- a rarity in the fast-moving world of memes.