In this post, we curated a list of the 22 best Earth-chan memes. We also explore how Earth-chan got started and some of the best fan art on the internet.

The internet is full of memes with new ones emerging every day. A fascinating, and somewhat dated, example is the Earth-chan meme. If you have seen this meme on Tumblr, Instagram, Reddit or Twitter, you might be wondering what it is all about and how it came to be.

Earth-chan is an anthropomorphic anime-style character who, as the name suggests, is a representation of the planet Earth. Earth-chan is a young girl with hair that has been dyed blue and green. Her hair is a representation of the water and ground of the planet Earth and is similar to a picture of Earth taken from space (Source).

There are many jokes that have been used in this meme relating to recycling and the flat Earth theory. The running joke is based on the anime trope of females being unhappy about having a flat chest. This fits into the running theme of the flat Earth theory where some people believe that the planet is not round.

The Biggest Natural Hole In The World This meme made his first appearance via Reddit and it shows an interesting fact about Xiaozhai, a natural region in China: it has the biggest natural hole in the World, and obviously and anonymous user decided to represent a funny Earth Chan meme as a reaction of this. 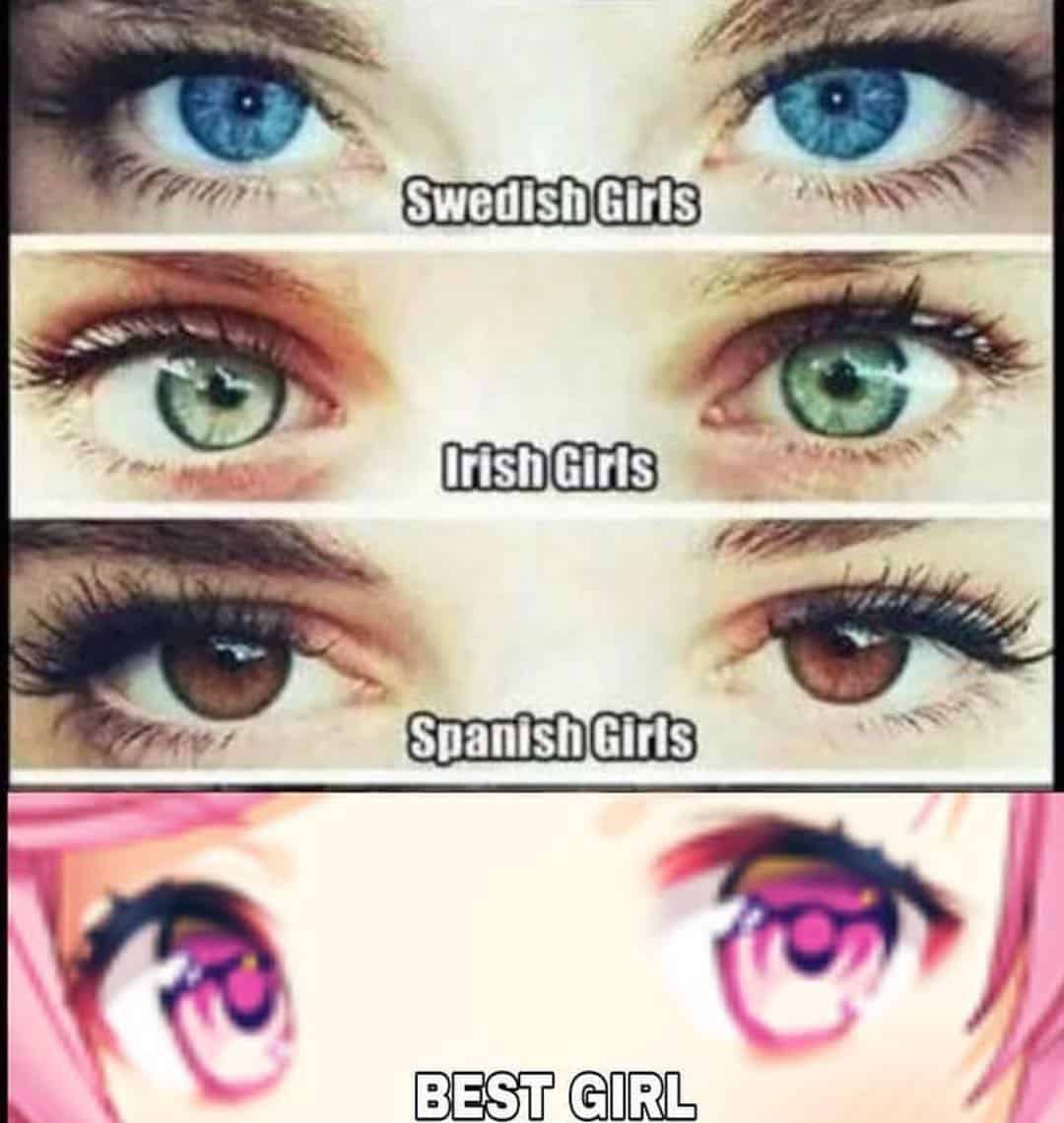 This comparison meme has been everywhere over the Internet, most of the time related to how eyes change when consuming different drugs. This time, the Instagram account @monikasthiccness decided to create one of these memes but using different girls’ nationalities and finally showing that the best one goes to anime girls, at least for anime lovers. An internet user shared via Reddit, in the page /r/Animemes, this funny fanart mentioning that Earth is basically rocks and dirt on the inside, so there’s a high probability that Earth-Chan is dead. That’s why in the fanart, Earth-Chan simply answers: yes. This created a new debate about Earth-Chan on social media: is she really dead inside or not?

Following the unusual trend of “Flat Earth Society”, an internet user created a funny meme about this topic and shared it on Reddit’s r/Animemes. In the picture, the anime girl just says “Earth is flat” as an example of what some Flat Earth believers want to assume, but then it shows a man spraying “No it’s not” as a reply made by scientists. The title of “thicc not flat” is used to associate it with the Earth-Chan character. According to an image of The Wall Street Journal (edited on purpose), it says that is possible to genetically create catgirls on Mars. The Internet didn’t waste time with this picture and then this meme appeared via Reddit’s r/dankmemes. The creator just decided to put a typical miscellaneous image of Space X Corporation and a rocket as something that many users would do if it was possible. 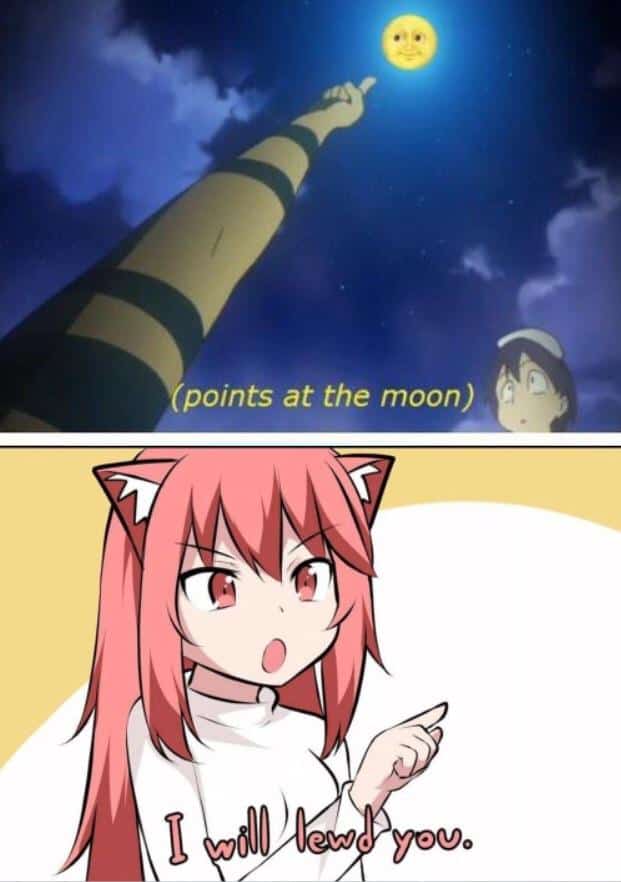 Everything is possible on the Internet, especially in the Anime World. This is a great example since it shows part of an anime with a character pointing at the moon, which has the emoji face (moon smiling emoji). As a weird interpretation, it should mean that even the moon can turn into an anime character, just as Earth did. This meme was first posted on Reddit.

There are not only Earth-Chan memes on the Internet, and less if we talk about Reddit. For this meme, an anonymous user decided to use Pluto as the main topic. Pluto-Chan appears as a small girl calling to NASA-sensei, but as they did once, they decided to exclude it again for being too small. That’s why at the end of the comic strip, Pluto-Chan cries. An Internet User decided to share this beautiful fanart via Reddi’s r/PROTECC. The fanart was made by Rohui, and it’s Earth-Chan full of wounds and band-aids, and even smog coming out of his head, as a cruel representation of how Earth looks right now being polluted. This picture was created to give a nice message to Reddit users.

Following the topic of fanarts on Reddit, the artist VikaRock created this amazing illustration of Earth-Chan, with strong colors, and even some sparkling effects to make you feel like you’re seeing the character straight into outer space. This illustration was posted on /r/SolarSysGals, a page that shows Solar System planets, asteroids, or even moons as if they were girls.

Neko-Monika-Chan is very popular among anime fans and in this image, someone decided to accompany her with Earth-Chan, as a sexy fanart shared via r/DDLC. There are multiple illustrations like this with Earth-Chan featuring other famous characters, and most of them are shared exclusively on Reddit.

As we mentioned before, r/SolarSysGals is a Reddit page where you can upload illustrations about Solar System planets, stars, asteroids or even moons as if they were beautiful girls. Here’s another example of it with LoveBakaWerewolf’s interpretation of Earth-Chan, being just an innocent girl with a bathing suit.

Thanks to Earth-Chan, many people have created a lot of memes related to Earth Flat Society. This is another example with a fanart created by hitori-draws, showing a sexy Earth-Chan with curves, as a funny interpretation of a round Earth, or like they say, a “thicc” Earth.

Here is another weird one that we don’t quite understand. She’s dolled up in a Santa Claus outfit and seems to be making some sort of comment about California wildfires.

Here we see a cute version of the girl with the hair colored in blue and green to resemble the planet Earth. The caption reads “Please take care of Earth Chan she is just doing her best here okay.”

Earth chan is not flat from Animemes

Here we see a pretty stunning version – she’s converted into what looks like some gold-plated military robot. We are not huge anime fans as you probably have gathered at this point, but if you are, let us know in the comments section exactly what is going on here. The artistic rendering is pretty high quality – we recommend checking out the anime meme subreddit if you want more content like this.

Here we have an image Earth Chan in a NASA shirt holding up the Earth. The earth looks like a saucer with a bunch of urban city elements contained inside of it. It comes from the subreddit SolarSysGals.

Here is a funny option. It shows a Google search for January 15th general strike for the planet. It seems to imply that the more people coalesce to protest for environmental protections that the cartoon character herself grow stronger and stronger.

In this one, she is wearing a very wifely looking apron holding a sauce ladle as if she is doing some cooking. We’re not entirely sure if this is meant to represent something maternal or perhaps the fantasy of an animator who is looking for a girlfriend.

My earth chan cosplay! from Earthchan

Here’s somebody who has tried to dress up like the character. Perhaps for a school event. She does a pretty good job pulling off the look, dying her hair blue and wearing the NASA shirt.

Hear the character looks a little bit waifish and forlorn, wearing the ubiquitous mass of shirt with some clouds and circling her characteristic blue hair.

The last one on our list is another fan art interpretation. It shows her looking directly into the screen with eyes that resemble the globe of Earth.

The idea behind Earth-chan first surfaced on Twitter and did not actually have any visual representation of the character. The Twitter user @Trinimmortal was the first to post an idea for an anime series. They posted stating that there should be an anime where the solar system is represented by anime girls attending the same school. In the anime, there should be a running joke where Earth-chan will always say that she is not flat. This tweet was the birth of Earth-chan, providing the basis of future illustrations as well as the running joke which is still seen in the meme. The first drawing of Earth-chan was in a reply to this original tweet and was posted by Twitter user @felipecunhaeloi.

The Spread Of Popularity

Earth-chan did not stay on Twitter and soon spread to other online platforms including Deviant Art. One artist posted several comic illustrations of Earth-chan on December 7, 2017. These illustrations included one with Earth-chan stating the running joke of not being flat.

By December 12, the meme had moved to Reddit with one user submitting a comic on the platform. This comic introduced some new characters to the meme such as the NASA character and the moon. In the comic, Earth-chan is complaining to the NASA character that she is being called flat while holding hands with the moon character.

This leads the NASA character to say that Earth-chan should not believe what people are saying and that she is not flat. This comic was a success on Reddit gaining more than 5900 points in a 24 hour period. There were also around 280 comments on the comic and the spread of Earth-chan continued.

The Continuation Of The Meme

While Earth-chan came into being in 2017, the meme is still widely used. There are many illustrations which carry on the running flat joke while others have turned the meme to more environmentally conscious jokes. However, Earth-chan has not remained an internet meme only.

There are a lot of people who have taken to cosplaying Earth-chan. These people will generally have wigs which are the same as the blue and green hair the character has. They will also generally wear traditional school uniforms as seen in anime.

Earth-chan is a meme which was born on Twitter and based on an idea for an anime series about the planets. The meme continued to spread through social media and is now a fixture online.

Indeed, there are many ‘sexy’ portrayals of the character- with amateur anime creators getting in on the act and posting the fan art to Reddit, Imgur, Tumblr, Twitter and other channels. In particular, people who like anime girls with blue hair, the ‘that’s how it is on this b of an earth’ meme, anime planets- all of them have found rapport with this anime character.

A lot of users have also expressed a passion for the Girls Frontline Twitter account– which is a turn-based simulation mobile game developed by Mica-Team- check that out if you’ve never heard of it before and have read so much about Earth-chan in this post that you’ve reached the very end!