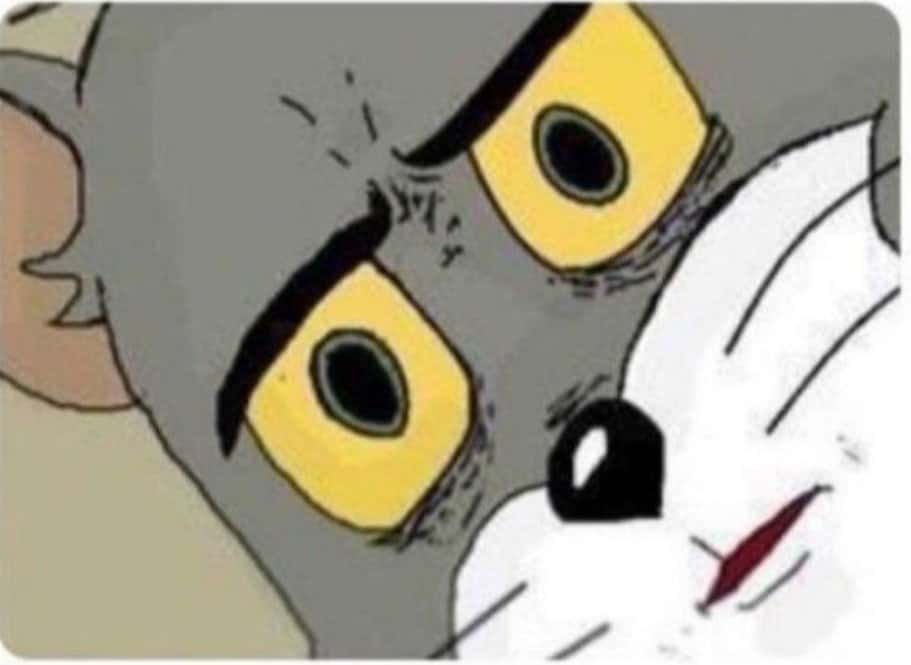 Tom and Jerry is an animated series originally released in the 1940s. It features a cat, Tom, and a mouse, Jerry, who are constantly after one another, and is widely considered the origin of slapstick comedy. Because the animation of the show is so exaggerated and cartoonish, screenshots of Tom and Jerry make the perfect meme material.

Different Tom and Jerry formats are constantly popping up on Reddit and spreading across the internet. Some of the most common are Polish Jerry – an image of Jerry looking flustered, usually captioned with a dirty joke – and Concerned Tom, a reaction image that shows Tom looking dramatically worried. Of course, those aren’t the only Tom and Jerry meme formats out there – see more examples below.

The 23 Best Tom and Jerry Memes

1. When your crush says she loves you This Reddit meme is the perfect example of Polish Jerry. Jerry’s befuddled expression is a reaction to saying “no homo” to your own crush.

2. My mom and the cashier trying to do their job Reddit users are constantly on the lookout for new Tom and Jerry formats. This is an example of a format that isn’t widely used, but works perfectly for the joke: old people aren’t very nice to customer service workers.

3. The Nerf dart that bounced off the wall

The “Tom shoots himself” format is another really popular one, used to represent self-harmful actions. This meme from Reddit is about getting hit with your own Nerf bullets.

3. Sleeping vs. my responsibilities 4. Kanye West and the homeless man This image of Tom sneaking through a door has been used as a super popular meme format on Reddit and Instagram. This one is about Kanye West’s clothing line – it looks a lot like a homeless person’s wardrobe.

5. It’s because you’ve been on that phone

This is a great example of the Concerned Tom meme format from Reddit. The reaction image is used to show concern at something stupid the poster’s mom said.

6. When you thought you passed your test Here’s a meme from Reddit featuring Polish Jerry: when you fail your test so hard, you get a G.

7. Turning off the fan because it’s cold 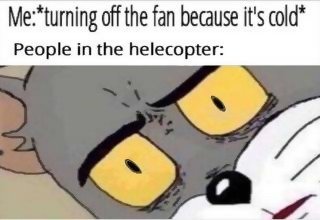 A lot of Concerned Tom memes feature captions that are beyond concerning, or even alarming. This one from an Instagram meme page is a perfect example: turning off the “fan” in the helicopter. In this image, Tom’s eyes have been edited to make the pupils smaller, so his expression is even more concerned.

8. Opening the window to let fresh air in Here’s another great example of an alarming Concerned Tom meme: opening the window on an airplane. 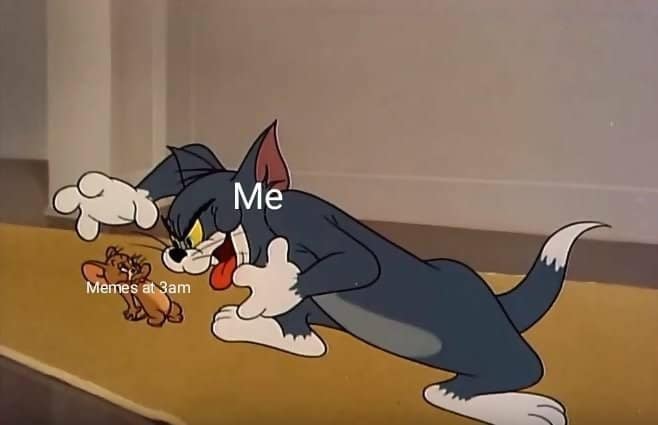 This meme from Reddit is in a less popular format. The poster is showing their obsession with staying up late to look at memes. Here’s another meme of Tom sneaking through the door – this one is about depression sneaking up on you when you least expect it. 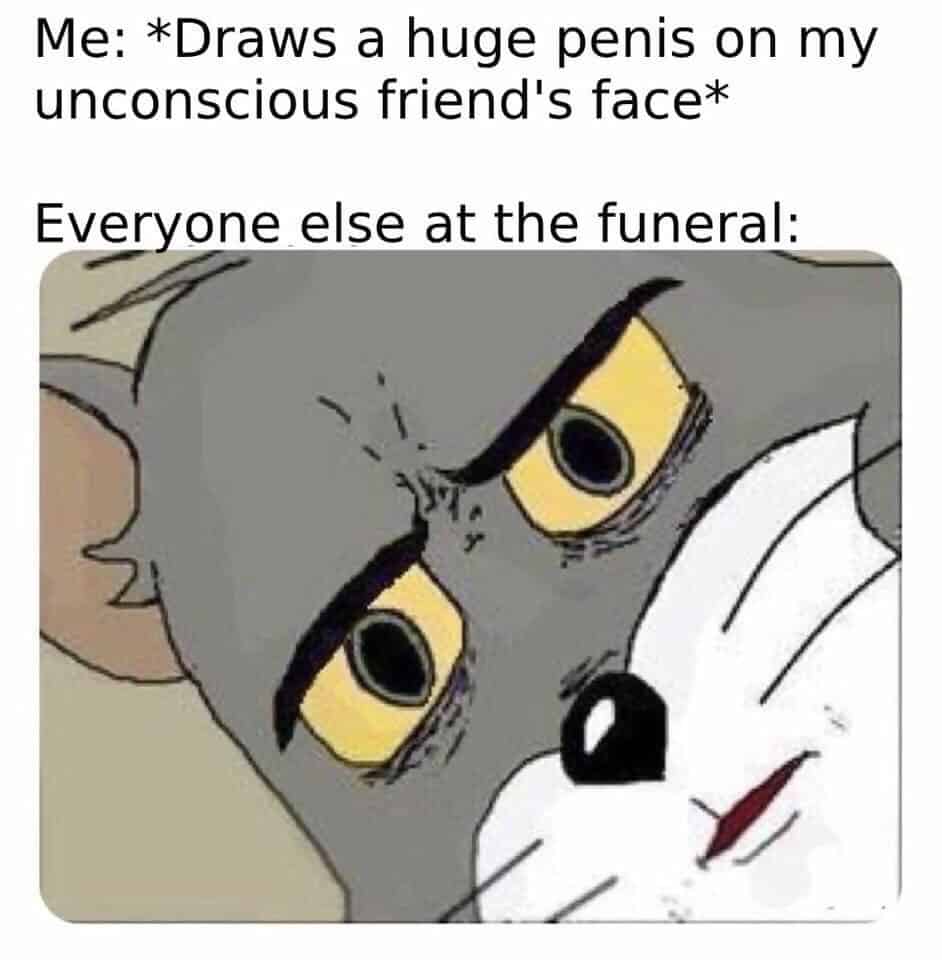 In the most popular Concerned Tom memes, the first line of the caption is something normal, while the second line and the image show why it isn’t normal at all. This one is a good example: drawing a penis on an unconscious friend’s face – who actually turns out to be dead. This image of Tom looking up from his newspaper is another popular meme floating around Reddit, showing concern or aggravation about something. In this meme, he’s reacting to someone using the toilet without washing their hands. 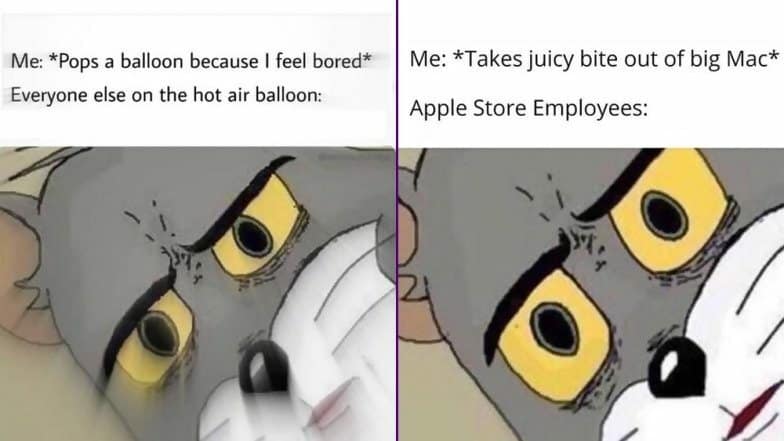 Here’s another meme in which the first line seems normal, but the second line reveals what’s wrong. Taking a bite out of a big Mac – but it’s actually a Mac computer, not a burger.

14. When you hug your grandma Polish Jerry memes usually come with a dirty or disturbing caption. In this one, the image is blurred to make it feel even more uncomfortable.

15. Finally gets the courage to ask out my crush

Here’s another classic Concerned Tom meme, posted by a Reddit user in 2018, about asking out your crush at the family reunion. This meme of Tom in a square shape is obscure, but works for certain jokes – “be there or be square” is the perfect caption. Another slightly alarming Concerned Tom meme: cutting ties with your climbing partner. The picture is blurred in this one – to make Tom look more alarmed and to show the motion of someone falling. 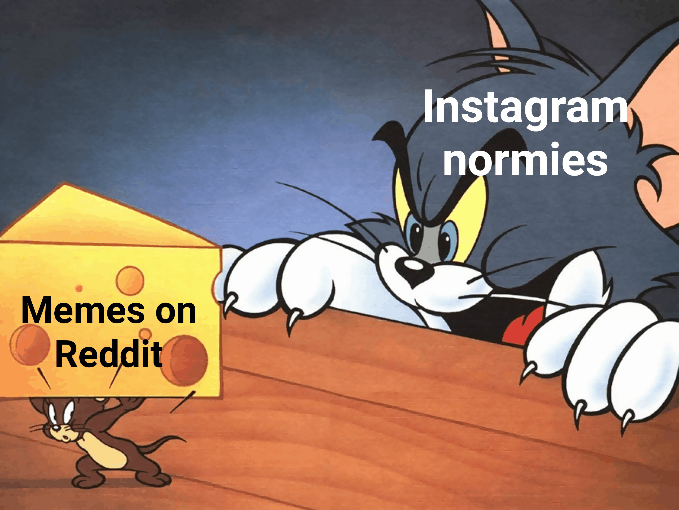 19. Love and affection to my friends

Wholesome or innocent memes have gained popularity in the past couple years on various social media platforms. This one shows Tom violently sprinkling love and affection on his friends. This is another meme made specifically for Reddit users. It’s a comment on the popularity of Tom and Jerry memes and how quickly different formats spread.

21. Trump when controversies are dying down Here’s a political meme from Instagram, showing Tom sneaking through the door as Trump, ready to start drama with another controversial tweet.

22. Redditors vs. Tom and Jerry animators 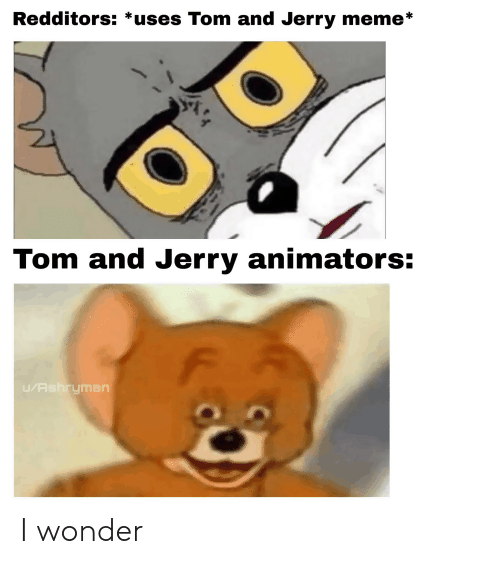 Last but not least, here’s a meme from Reddit featuring both Concerned Tom and Polish Jerry – what would the animators of the original show think if they could see the memes that have been made?

Whats up with the Tom And Jerry memes? from dankmemes

Over in the dank memes subreddit, somebody posted the classic Tom face, wondering what’s up with the Tom and Jerry memes? It apparently references the sudden virality of the meme and how often it was being used in the subreddit.

In this one, we see Jerry threading a shotgun through the wall gleefully, not realizing that he’s actually aiming a gun at himself. This meme is making fun of Tumblr which decided to ban not safe for work content. This was a pretty big sensation when it happened. Tumblr apparently decided to remove a lot of the risque content that was on its platform, but Seemingly missed the mark because a lot of its users visit the site for that content.

Tom and jerry memes are cool from dankmemes

Another dank version that was popular on Reddit is this one where Tom is holding open a mouse hole for a running Jerry only to move the aperture right as Jerry was about to scurry through. The Reddit user employed this meme to signify his feelings about free trials on the internet that require you to enter your credit card information.

It implies that for your solicited for the credit card information you’re excited about signing up, but as soon as they want payment details for a free trial that’s when you leave the website never to return.

Redditors jokes that Tom has insane strings to be able to easily manipulate a hole in the wall like that. Another Redditor remembered when Jerry got hit with a fire poker and it actually bent around him. So it seems that both of these cartoon animals have almost supernatural strength.

Tom and Jerry memes have been making it to the front page these days, should I invest? from MemeEconomy

In this era of Trump derangement syndrome, of course there had to be a Tom and Jerry Donald Trump meme. In this one, it comes from the meme economy subreddit and has the caption when old controversies are dying down and internet is calm, Tom appears through the door Holding a Twitter icon and wearing the now Infamous gold Trump bouffant. It pokes fun of Trump’s seeming addiction to social media and his Joy antagonizing his political and media enemies on the social platform.

There’s even an entire subreddit dedicated to the cartoon – this is a lot more wholesome place that isn’t littered with risque memes. It’s described this way “Tom and Jerry is an American comedy slapstick cartoon series created in 1940 by William Hanna and Joseph Barbera.”

The Evolution of Tom from TomAndJerry

The top all-time post is this one below entitled The Evolution of Tom. It shows how the cartoon evolved from the 1940s all the way up to 2019. We see the latest Incarnation is the meme version. Redditors debated about which version they like the best, was some preferring the 1940s and other is preferring the 1960s.

Wikipedia has a lot to say about the series, providing a pretty comprehensive plot overview. They say that these iconic adversaries generally battle without Tom trying a variety of creative maneuvers to capture Jerry. There’s always a ton of mayhem that ensues.

Interestingly, there was a lot of controversy about how violent these cartoons were at the time. Nowadays that almost seems quaint, given how violent and even gory television shows are. At the time though, it was pretty strange to see Tom using firecrackers, poison, firearms, hammers and axes to attack Jerry, with Jerry retaliating in a variety of violent manners that included sticking his tail into a waffle iron and even electrocuting him.

However, it’s important to know that there was never any blood or gore – the violence was slapstick and you never got any sense that the action was brutal or truly terrible.

Music was also a pretty big deal to the show. There was a lot of classical, pop and jazz music employ to infuse the show with its manic and artistic fervor. One of the weird things about the show, there was little to no dialogue between the two characters. However other characters have been captured speaking English- Mammy Two Shoes, for example.

With so many different formats and so much room for creativity, Tom and Jerry memes are here to stay. Polish Jerry, Concerned Tom and other current formats may die down over time, but we can definitely expect new formats to continue popping up all over social media.

The Best Who Would Win Memes | Plus Meaning & Backstory