The Doubt meme, also known as Press X to Doubt, originated from the video game L.A. Noir. In the game, the player often interrogates subjects and is given options based on what the subject says: Truth, Doubt, or Lie. The original meme is a screenshot of the game’s hero, detective Cole Phelps, wearing a smug smile with the option to press x to doubt on the screen.

That screenshot has been widely used on Reddit and other platforms as a reaction image – as in, the person who posts it highly doubts what another person is saying. There are tons of different versions of the Doubt reaction image out there now – see some popular examples below.

1. When someone says they got you 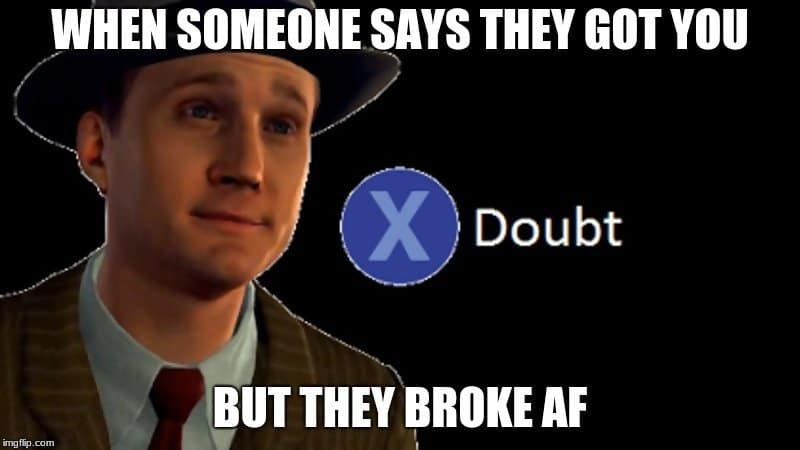 Here’s a great example of the Doubt meme from Instagram. When someone says they got you (will pay for you) but they’re broke… definitely doubt. This meme is using the original Doubt picture as a reaction image. The word “India” over a picture of Africa makes that post pretty hard to believe. 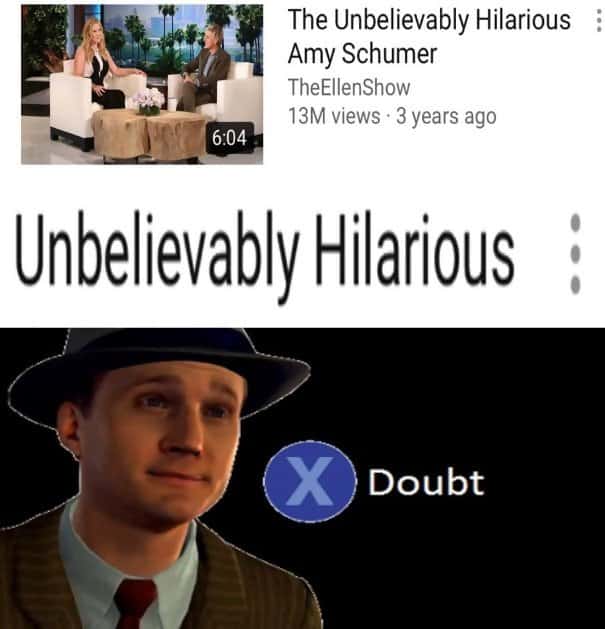 This Reddit user is using the reaction image to express his doubt that Amy Schumer is really that hilarious. 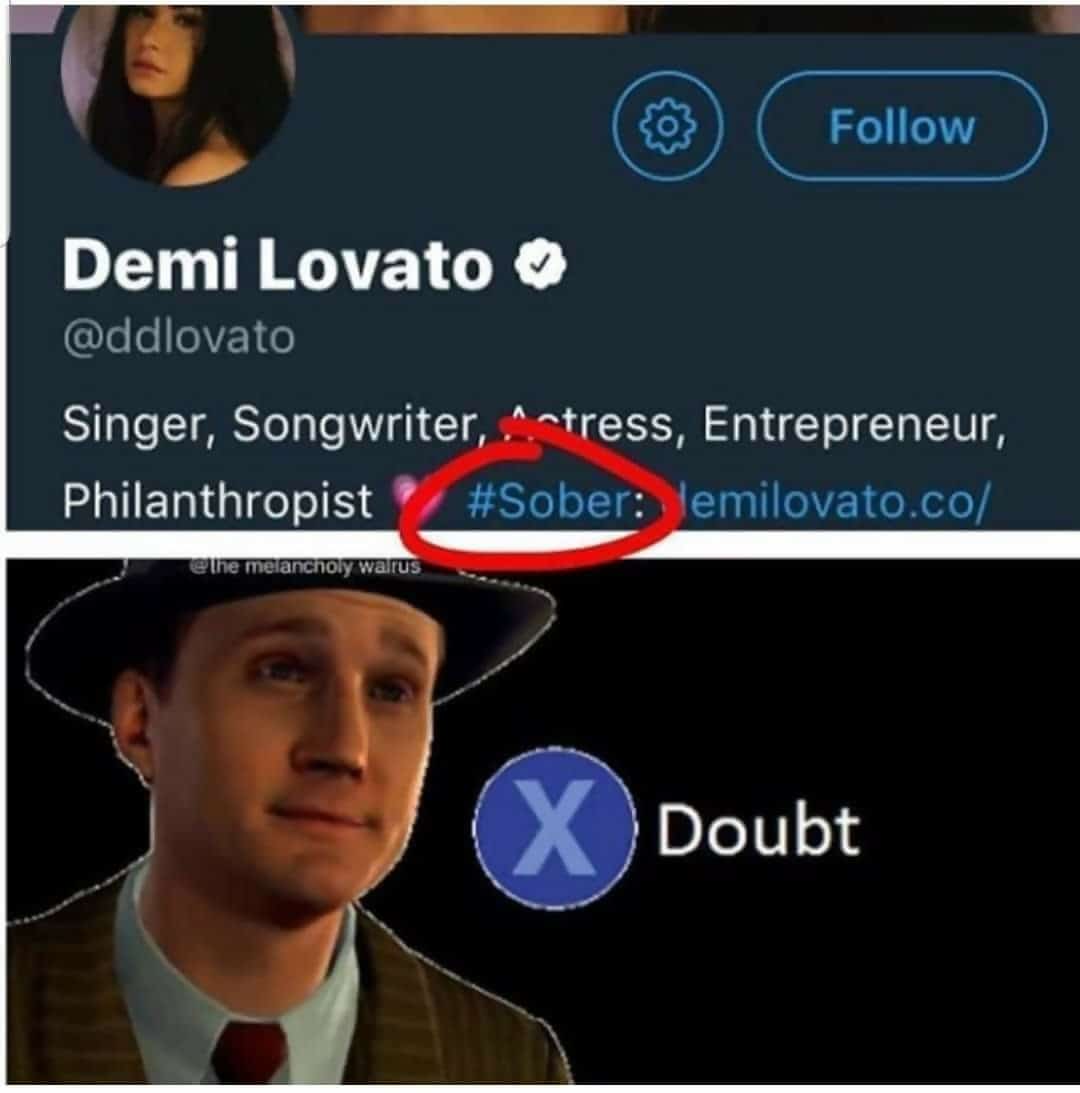 Another Redditor is using the reaction image under Demi Lovato’s Twitter biography, with the #sober circled in red.

5. Anti vaxx mom: my kid will be fine This meme circulating Instagram is showing doubt for the idea that vaccines cause autism. This Reddit gamer is using the reaction image to show his doubt that Sonic is going to have a great future – it’s a reference to the upcoming Sonic the Hedgehog movie, which has fans of the game super disappointed. This one isn’t a reaction image, but a funny meme referencing the move Mrs. Doubtfire, in which Robin Williams dresses up as a woman to spend more time with his children.

8. We’re hitting Doubt levels that shouldn’t even be possible This meme takes the reaction image to a whole new level. The photoshopped glowing red eyes are used to make a meme more intense or direct – in this case, the image is expressing extreme doubt.

9. You can’t replace every meme with a prequel meme The “Prequels” in this meme refer to the Star Wars prequel trilogy, which fans of the series love to make fun of. It’s a meta joke about meme culture and the Star Wars fandom. This image is a meme of another meme: the Unsure meme featuring Fry from Futurama was similar to the Doubt meme in meaning – this one combines them together.

This image from a Reddit gamer shows Detective Cole Phelps with multiple reaction options – 3 of them are Doubt, and 1 is Sarcastic. 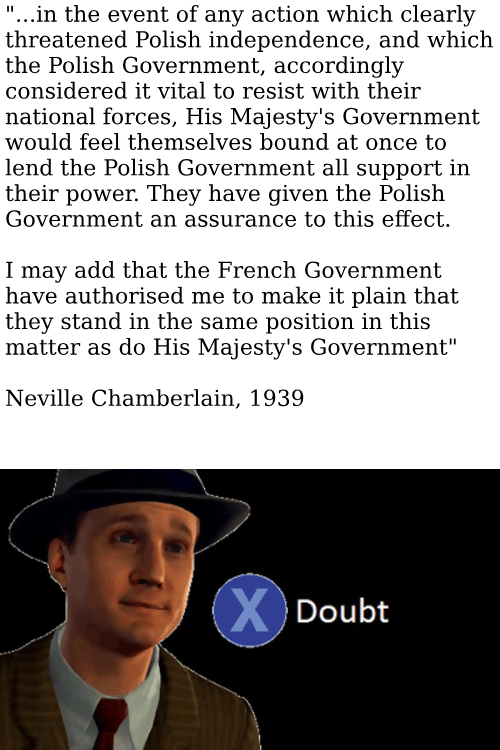 Press Y to Lie is another option the player is given in L.A. Noir. This meme combines the reaction image with another popular meme, a viral video of a man singing why you always lyin’.

14. Sith lords are our specialty 15. When someone tells me I’m good at drawing

This is a play off the original reaction image, but poorly drawn to emphasize how bad the poster really is at drawing. 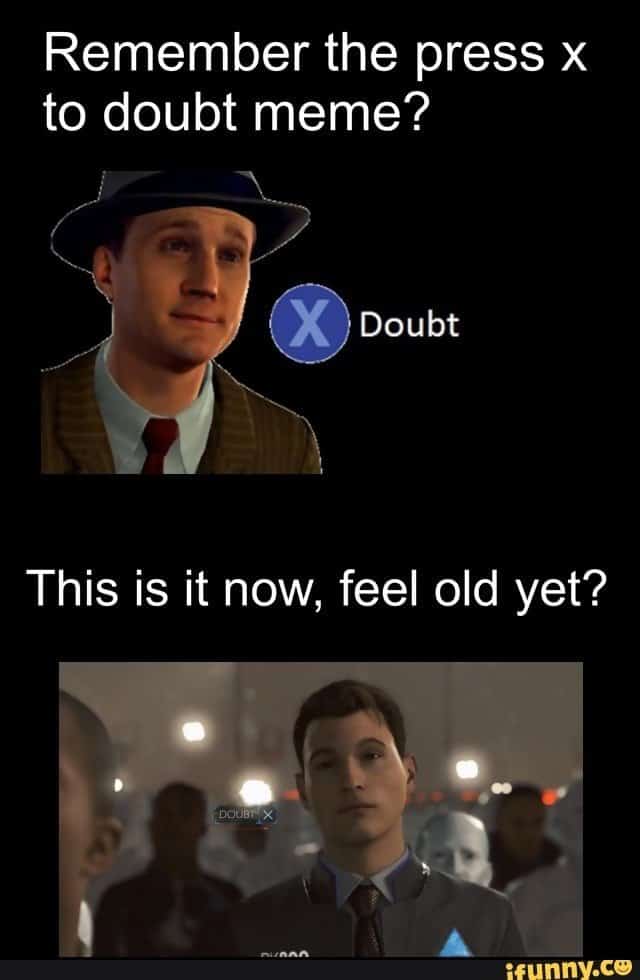 This meme shows the original Press X to Doubt image with an updated video game image. This format has been used across social media to compare two things that (sort of) look alike.

18. You don’t know her, she goes to another school This is a classic example of the Doubt reaction image, referencing a common lie a lot of us heard from our buddies in middle school.

19. 100 Disney memes that will keep you laughing for hours Here’s a reaction image from a Reddit user who clearly doesn’t think Disney memes can be that funny. 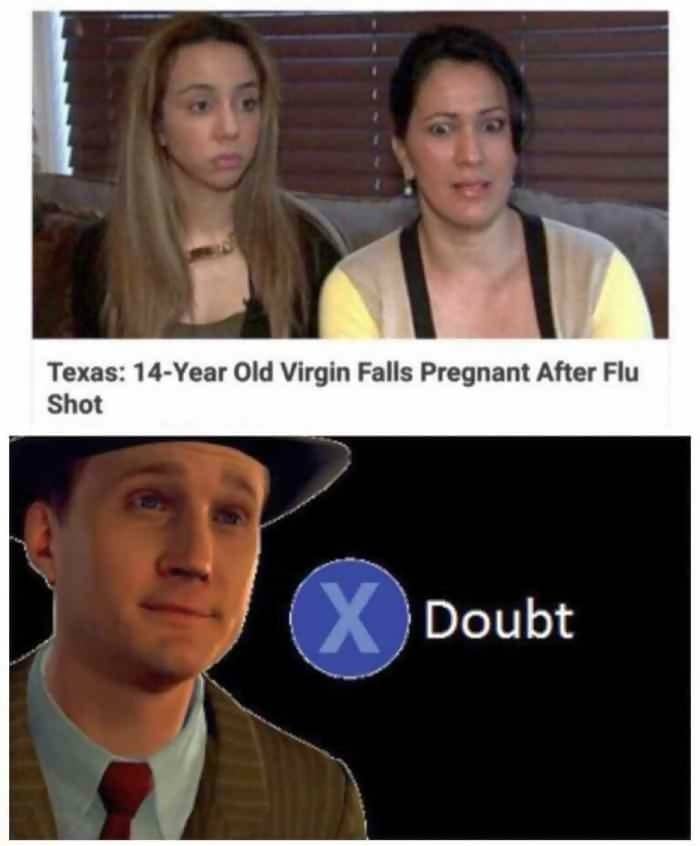 This is another classic use of the Doubt meme, posted under a news story that’s definitely hard to believe.

21. Jean Grey is scarier than Thanos This meme posted by a Marvel fan on Reddit expresses doubt that the newest X-Men movie can live up to the Avengers series – they’ve photoshopped an image of skeptical Thor over Cole Phelps. This self-depricating meme posted by a Redditor shows doubt in a news story claiming that people like you more than you think.

One Instagram meme page mashed together multiple images to show their extreme doubt in a viral Facebook article claiming that time travel is now possible. This is another example of the Doubt meme in the Increasingly Verbose format, breaking down the statement Press X to Doubt. This image pretty much explains itself. A sign with an airplane and the word “Helikopter” – looks pretty doubtful to me.

26. We experience no serious shortage of food Here’s another meme from a history buff on Reddit. No shortage of food in Soviet Russia? Definitely doubtable.

Reddit Had A Lot To Say About This Meme

Any potential in the press X to doubt meme? from MemeEconomy

Over in the meme economy subreddit, a user gauged other Redditors interest in the viral viability of this LA Noire doubt meme. One Redditor said that it’s been around for a while, hasn’t gone stale yet, but he hasn’t seen huge, popular responses to people using it. However, another user said that it is in decline, but if the format gets updated and a new variation is interpretive, there could be a resurgence in his popularity. Another person speculated that it is a really old meme at this point, but if you are able to apply it to breaking news, you could probably see it returned to popularity.

I’m from the future. The "Press X to doubt" meme will make a comeback. from MemeEconomy

Over in the same subreddit, there was more speculation about the future stock of this meme. The original poster was somewhat bullish, saying that the meme will make a comeback. Some people joke that this imaginary future person had returned to the Past merely to destabilize the economy. Another person said that maybe it become popular again if Rockstar announces L.A. Noire 2. Others merely reacted to the image saying ‘Is it just me or does the dude look like Ken Cosgrove from Mad Men?’

Press X to doubt from memes

In another area of Reddit, there was a new interpretation. It was used as a text meme. The title of this Reddit post is press X to doubt. In the image, people seem to be making fun of YouTube thumbnails that are really doubtful. These include walking a bee on a leash and “I shaved off my eyebrows”.

Over in a subreddit dedicated to the rockstar video game, someone created this image that cast doubt on the sobriety of Demi Lovato. Apparently, the original poster was looking for people to show him more examples of memes from the game. However, the only ones user could think of all the Press X to doubt and Cole falling down some stairs.

Should there be an L.A. Noire Memes subreddit? from lanoire

Another redditor posting in the LA Noir video game community was wondering if there should be a dedicated subreddit Just 4 memes from the video game. He said that he’d like to explore more of this meme content but he doesn’t want you use so to the detriment of the general discussion board and converted into an annoying circle jerk meme tsunami. There wasn’t much positive response to his proposition, with one person telling him tell it to the DA, Chico. Another said that there are so few users around in general that having an even smaller Niche Community is likely not to get a lot of traffic or responses.

LA Noire is such an odd game. Am I misunderstanding the intent of the game? from truegaming

Over in the true gaming subreddit, there was a wider discussion about the game, with the original poster saying that it is really odd and that he thinks he may have misunderstood its true intentions. He says that the primary problem he is having about this 1940s hyper-realistic cop investigation game is the difficulty has and reading facial expressions you determine if people are lying.

He says that misreading these facial cues is a pretty common occurrence whenever he plays. The other frustrating aspect about it is the disc jointed dialog. so overall his primary problem is with the attempted realism of the game not quite enhancing actual gameplay. Renders generally seem to agree, the one person saying that the overall tone of the game was a little bit on coordinated.

On the one hand, there’s a lot of realism to it in the character himself is incredibly serious and down-to-earth, but whenever you are doing a free roam around the game’s Universe, the physics and action are really wacky and almost cartoonish. Indeed, Redditors seem to agree that the biggest floor of the game is the discontinuity between the storyline in the open world aspect.

One person mentioned how cold would be heading back to the station but I could easily be diverted from that comment surprise into pulling a Thompson machine gun from his trunk and murdering 50 people. The two sides of the gameplay just didn’t seem to align. You can read more discussion about the gameplay over on Reddit.

L.A. Noire is a neo-noir detective action-adventure video game produced by Team Bondi and published by Rockstar Games. It was released in May 2011 for PlayStation 3 and Xbox 360, in November 2011 for Microsoft Windows, and in November 2017 for Nintendo Switch, PlayStation 4 and Xbox One. The tale is set in Los Angeles in 1947 and follows a Los Angeles Police Department (LAPD) officer, who works a range of cases across five divisions. Gamers must examine crime scenes for clues, follow up leads, and question suspects; the player’s progress at these activities will influence how much of each case’s story is shared. (Source)

The Press X to Doubt meme is widely used as a reaction image, but it has been used in a lot of other popular meme formats, too – especially as an Increasingly Verbose meme. It’s popularity has gone down some in the past couple years, but it can still be seen across different social media platforms as a way of mocking other people’s posts and comments.