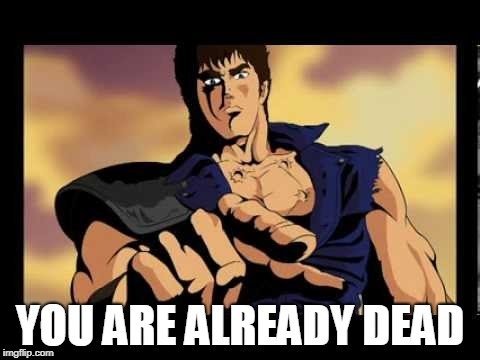 In this post, we explain the meaning and origins of the popular omae wa mou shindeiru (You Are Already Dead) Meme and source 25 of the best meme examples from social media.

“You Are Already Dead” (Japanese: お前はもう死んでいる; Omae Wa Mou Shindeiru) is an expression from the manga and anime series Fist of the North Star (Japanese: 北斗の拳; Hokuto no Ken). The catchphrase is often joined by a picture of the lead character Kenshiro pointing at the viewer, which has received usage as a reaction image in disputes on image boards and discussion forums (Source).

You’ve probably seen this phrase on a meme on social media, but you’re not sure of what it means. It is a Japanese reaction or phrase meaning, “You’re Already Dead.” The phrase is a derivative of the anime series named the Fist of the North Star (Hokuto Shinken) which features Kenshiro as the main protagonist. That’s why the memes you’ve been encountering reaction arguments and image boards features Kenshiro pointing at the viewer and saying the famous catchphrase.

If you want a quick overview, check out this hilarious mashup of the Omae Wa Mou Shindeiru meme in action:

Avid followers of Japanese animes know this catchphrase has been around for a long time. The first ever use of the phrase was during the premiere of the Fast of the North Star anime series in 1983. Kenshiro, the lead protagonist of the anime and a martial arts guru, could approach the opponent, say out the catchphrase and weaken the opponent by attacking his pressure points upon which his body would explode from inside.

Widespread Use Of The Phrase

“Omae wa mou Shindeiru” phrase has been around for a long time even before the invention of the internet. The earliest revival of the phrase can be traced back to the gaming chartrooms popular in the 1990s. Its use was mainly restricted to a situation when the opponent in a gaming competition seemed to encounter unexpected and inevitable defeat. Memes depicting the phrase started becoming popular in 2008. Thanks to the creation of YouTube, some of the memes become so popular to the point of gaining millions of views on the platform.

In 2010, a page with the same title as the phrase featured on TV Tropes. The makers of the page described the title as a dedicated trope of martial arts entailing finishing moves with delayed effects such as kicks on pressure points, diagonal sword cuts, etc. On 8th August the same year, the user “inui” of a DeviantArt user submitted Kenshiro’s illustration with a caption of “You are already dead.”

On 11th June 2011, Nekfrog – a member of NeoGAF forums submitted a thread inquiring the members of the forum about what meme they were getting tired of, “you are already dead” came top as the most misused meme. On 16th August 2012, UrbanSLUG – a YouTuber – uploaded an animation showing Kenshiro poking a man and saying, “you are already dead” – the man’s head exploded.

Some of the videos depicting the phrase became viral and brought renewed interest in the phrase. In 2017, the phrase began appearing again on social networks again especially on Tumblr. In September the same year, Know Your Meme – a website that catalogs internet memes – listen “Omae wa mou Shinderu” meme as its most interesting meme of the month.

There are dozens of slightly modified versions of the phrase on Tumblr starting with the funny line, “Roses are red, violets are pink” followed by a character about to meet an unexpected destiny and the phrase “you are already dead.” In this one, we see a New Zealand passport with some laser eyes emblazoned on it. Somebody submitted this to the Images Of Australia subreddit. This one probably requires an Australian citizens to decipher. Although as we have seen the lot of these memes, they are pretty obvious if you have some context for them. In this one, we have an animated meme that was submitted to 4-panel cringe on Reddit. In the final panel, Joker is derided as lame and weak. Granted we are not huge animation fans so we don’t exactly know what’s going on here. But if you are familiar with this mean, let us know in the comments section 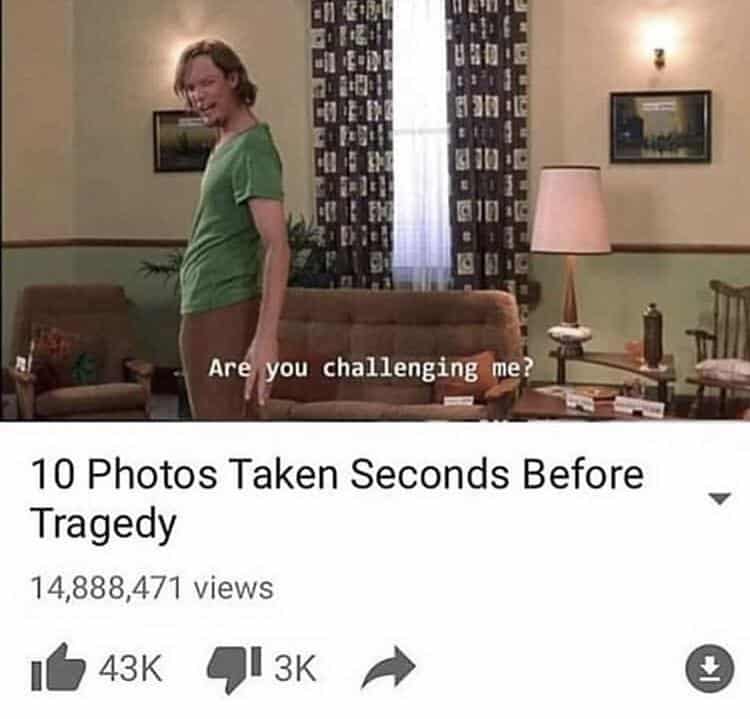 In this Shaggy challenge, it’s a screenshot Shaggy asking are you challenging me. On YouTube, the video is entitled “10 photos taken seconds before tragedy”. We haven’t seen this movie, but maybe you have and can enlighten us about what it exactly means.

You Are Already Dead from CrossCode

Over on the Cross Code subreddit, there is a gif from a role-playing video game that’s sort of looks like Secret of Mana. Again, we apologize for not being completely up-to-date, but we don’t exactly know what this meme means. Here, we see a dark character on a playing card, looking somewhat like Noob Saibot From Mortal Kombat. For those who don’t know, Noob Saibot was a shadowy figure in the Mortal Kombat video game that had powers of teleportation.

[Haiku] You are already dead from youtubehaiku

YouTube Haiku got in on the action with a green screen video.

You Are Already Dead, Brigitte from Overwatch

Over on the OverWatch subreddit, someone submitted a post entitled you are already dead, Brigitte. Our editors on strong social.com are no longer playing video game, so this OverWatch snippet is somewhat lost on us. You Are Already Dead from medievaldoctor

Over in the medieval doctor subreddit, we have some hardcore animation taking place. There’s a lot of crashing action Fitness black and white animation panel cartoon with some serious looking Japanese intensity.

You are already dead before you challenge them from totalwar

The total war subreddit captured this screen image from the game in which it apparently appears that one character is already dead before they challenge the other.

You are already dead Kumiko from rarekumikos

Here is a pretty weird looking image. There are a pair of men dressed up like Japanese school girls. One is saying to the other apparently you are already dead Kumiko. This was posted to the Rare Kumiko subreddit. There are a lot of these funny anime subreddits out there that are so heavily ironic and later that it is almost impossible to decipher their true meaning.

[0:52] ALERT: You are already dead. from hearthstone

Here is another one from the Hearthstone subreddit. It’s a YouTube video with what looks to be salmon pink horns heralding some type of dangerous situation.

You are already dead from memes

You can always rely on the Dank Memes subreddit to provide deep fried and overly complex memes. A lot of the Enders here are subscribed to the Dank meme subreddit and pretty much all the time has no idea what the submitted graphics and images actually are. It seems you have to be heavily invested in a particular topic to decipher what they actually represent. Here we have some text on the image that gives us some Clues. It reads “by the holy decree of this meme the person below this is infinite gay”.

You are already dead from unexpectedoverwatch

Another OverWatch meme was submitted. It’s a screen grab from Reddit. It reads what the f*** did I just Witness. Somebody responds “Perfection”. Another responds “simple geometry” before we see the familiar refrain “omae wa mou shinderu”.

You are already dead 😤 from memes

Bugs Bunny is even utilized to capitalize on this trendy meme. This image was submitted to the memes subreddit over on Reddit and showcases an iconic image of the famous Japanese anime character pointing out one of the most iconic rabbits in cartoon history.

You are already dead from dankmemes

As the anti-vaccination movement has gained a lot of no tortillas oversight oh, a lot of memes have appeared. In this one it reads “anti-vax parents on your kids 3rd birthday be like I diagnose you with dead.” We’re not sure what the cartoon pig doctor image represents, but the joke’s here is that parents who are against vaccinations are presumably dooming their children to an early death.

You Are Already Dead… from Polandballart

Here is a weird one. We won saw this website up for sale on Reddit, apparently they capture the essence of different nationalities into different ball art. Here is Poland ball art reciting the now Infamous catch phrase you are already dead

You don’t know it yet, but you are already dead from deadcells

Snake of the South Star. You are already dead. from Bossfight

Over in one of our favorite subreddits boss fight, this post was submitted that was entitled snake of the south star. You are already dead. In it, we see a flame whisking around a mannequin’s torso until it eventually spouts a deadly flamethrower out of the side.

You are already dead from softwaregore

You are already dead. from dankmemes

Here is another anti-vaccination meme. It reads when you’re 2 years old and looking forward to life but your mom is anti-vax. It looks like a bunch of happy cactus cartoon character has all of which represent different preventable diseases.

You are already dead from memes

Here we have Tree Star reacting to a laser-eyed Littlefoot.

you are already dead (omawa shindeiru from memes

It is fascinating to note that the memes of Fist of the North Star existed in obscurity for many years before their sudden revival to popularity. They may have been thought to be dead but they are still alive, and no one knows when and where they will pop up next. The makers of the manga probably never imagined the long lifespan of the phrase. The catchphrase has been used by some lexicographers to explain the power of phrases and the value of language as a tool in the age of information technology. It’s no longer just a mere meme on the web but the considerable part success of Japanese anime culture.