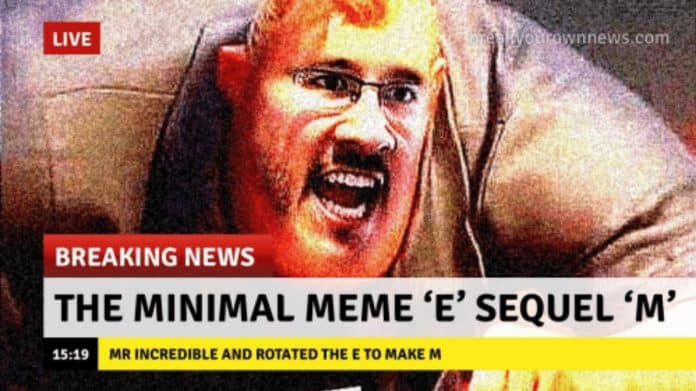 The E meme, also known as the Lord Farquaad or Markiplier E meme, is a surreal, totally nonsensical image that originated on Tumblr in 2018 and has since been spread across social media. It’s a part of a series of “deep fried” memes – images that have been heavily filtered until they’re grainy and washed out to make them look even more obscure. The original image, posted by a Twitter user back in May of 2015, showed Lord Farquaad from Shrek lying in bed with YouTube gamer Markiplier’s face photoshopped over him. Last year that image was adopted by a Tumblr user, “deep fried,” and captioned with a single letter E (Source).

The E Meme: A Video Tour

There are a few different versions of this bizarre meme floating around today, some of them replacing Lord Farquaad with Mark Zuckerberg or another prominent figure. See a few of the weirdest examples below. Here’s the original image posted by a Tumblr user in 2018: Markiplier’s face on Lord Farquaad’s body, deep fried, with the letter E as a caption. It’s weird, meaningless, and inspired a slew of new memes. Here’s the Markiplier / Lord Farquaad face superimposed over a colorful background, with the caption, “to E or not to E”. This meme came out of r/dankmemes around January last year. This is a popular comic that was circulating Tumblr and Reddit around 2017, featuring a cartoon baby saying something ridiculous as his first words. In this image from 2018 Tumblr, the baby’s face is replaced by the E meme. One of the most popular formats for the E meme is to paste the image over a popular movie poster. This meme from Reddit shows the cast of The Incredibles entirely as the Lord Farquaad / Markiplier mashup. 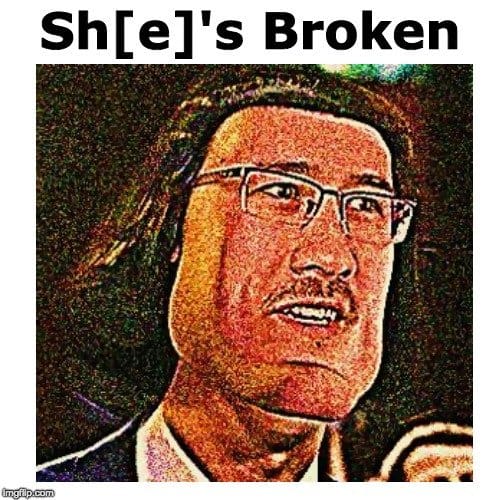 This meme is making fun of a popular quote from the early years of Tumblr – it originally said “S[he’s] Br[ok]en” – this one takes out the deep meaning by making it an E meme.

6. Ever just be E to flex on good memes? 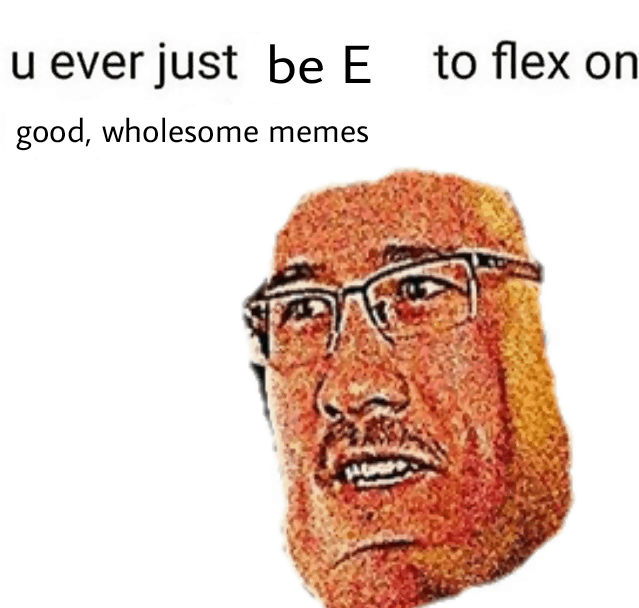 This meme from r/dankmemes is using the “you ever just __ to flex on __” format – it’s basically saying that the E meme is the shame of the whole meme community. Here’s another Reddit meme that uses the E image to ruin a movie poster – this one was made right before the release of The Avengers: Endgame.

The more obscure the deep fried meme, the better. This meme shows Markiplier’s face photoshopped over an egg, with the caption “Egg” in the font used for ESPN. At some point in late 2018, the E meme produced the M meme, featuring Bob from The Incredibles with Markiplier’s face instead of Lord Farquaad. In this meme, the joke is that someday there will be enough single letter memes to spell out “E=mc2.” Another twist on the E meme: Markiplier’s face photoshopped over another Shrek character, Prince Charming, this one with the caption D. Like the orginal E meme, this rendition was made by a Tumblr user. 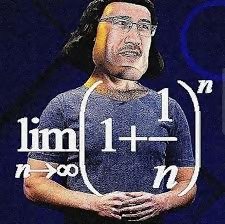 This meme from Reddit shows the deep fried Lord Farquaad / Markiplier photoshopped over a mathematician at a TED Talk, captioned with the algebraic equation for e. Here’s a meme from Reddit that shows Kim Jong Un shaking hands with South Korean president Ban Ki Moon – both of them are photoshopped and deep fried to look like the original E meme. One Reddit user took the popular “aliens” meme format – a screenshot of a crazy-looking historian from the History Channel – and made it into another Markiplier meme, this time with the letter C. Here’s a bizarre image from Tumblr: the E meme, but instead of being heavily filtered, it’s painted on Microsoft Paint or a similar app to make it look creepily realistic. The “glowing red eyes” format has been used across Reddit and Instagram to show dislike for something – this meme has the original E meme, pleased with the letter E but angry about the other letters of the alphabet. This meme from r/dankmemes has the Lord Farquaad / Markiplier face photoshopped onto Peter Griffin from Family Guy, with the caption “pEter.” This is an advanced meme that was circulating around Reddit last year. It shows the E and M memes in a pattern, effectively spelling out “MEME”. It’s a joke meant just for Reddit users with extensive meme knowledge.

Deep fried memes tend to be surreal, existential and totally weird. This one shows the E meme over Mark Zuckerberg and over the philosopher Descartes, with a philosophical-style caption in Microsoft Paint font.

19. Are memes evolving too quickly? In this meme, a Reddit user photoshopped the M meme under an article titled “are memes evolving too quickly?” to show how weird memes have become.

Internet Explorer takes a lot of jokes from memers. This image shows the E meme photoshopped into the browser’s logo.

21. Looks like they surpassed us a long time ago This meme from Reddit shows aliens evaluating humans. By the “sophistication” of the deep fried E meme, they determine that our society is highly advanced. This (potentially offensive) meme from a Reddit user shows the E meme photoshopped over Jesus in The Last Supper, with the caption “Esus died for our sins.”

What is this “E” meme? from OutOfTheLoop

Indeed, a lot of people were confused about the emergence of this meme. What does it mean? What are its origins? Over in the out of the loop subreddit, someone asked this very question, wondering why it has proliferated on the deep fried memes subreddit.

Someone said that it is merely representative of these sort of things we find funny in 2018. Another person wondered why Markiplier’s face is on it.

Another person said that it is nearly surreal memes doing their thing. On the other hand, it could just be that memes are getting less and less funny and interpretable by the general public. 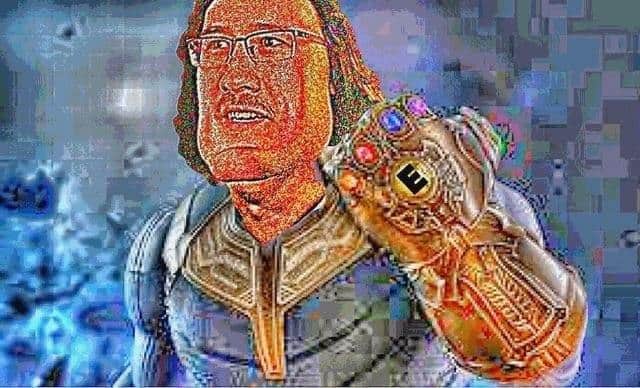 Another person had a more nuanced explanation, saying that they are designed to be so incredibly anti-humor that they actually end up being a little bit funny. Typically they’ll poke fun at something, in this case being so anti humor and random that it Appeals to some individuals.

Another person said that when he first saw this meme, he thought it was one of those meta memes demonstrating the difference in memes between the early 2000s and now.

In the early days, things used to be more explicitly humorous and nowadays require so much nuanced understanding and insider joke access that it only appeals to an incredibly small number of people on the internet these days. So in a nutshell, this is one of those absurdist jokes that demonstrate just how far we’ve come on the internet where anti-meaning has become a popular reference point.

Another person chimed in saying that it is an edgy deviation from past incarnations. They even made an interesting connection between the Press F to pay respects meme would be written about before and how it transitioned to the letter e. That’s definitely an interesting interpretation that not a lot of people I really believe, but you never know these days because the origin story of a lot of these memes is somewhat obscure.

ELI5: the E meme from explainlikeimfive

Over in the explain like I’m five subreddit, one person was completely confused about the E meme. One person explained that the meeting is centered on the fact that it is a deep-fried image of Markiplier’s face in Lord Farquaad’s head. They explained that the original picture comes from 2015 but was reposted in 2018 by someone on Tumblr. What makes it funny is how completely random it is. You’re actually isn’t he needs cleaning to it.

Another Redditor who identified himself as a teenager in America said that they have lost all sense of humor and nowadays specialize in creating memes that are incredibly esoteric and bizarre. Although at the end of the day they still find it incredibly funny. 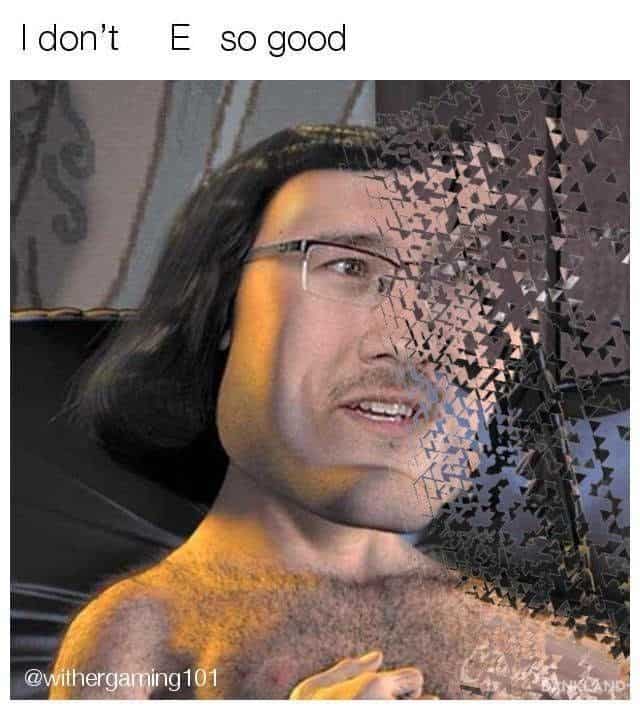 Here’s a funny one from @withergaming101 which is a play on the I Don’t Feel So Good meme.

What is the meaning/origin of the E meme that’s being used now? from OutOfTheLoop

Over in the out-of-the-loop community, one person was looking for some explanations regarding the meaning and origin of the E Meme and how it’s currently being used. One person responded, saying that it’s one of those types of memes that have so many different layered and ironic meanings that it doesn’t have any true actual value except to confuse individuals.

Another person wondered why there is that big bold be that is employed in the place of the traditional upvote image. Interestingly, one person said that there is a gang culture origin to all of this stuff. Apparently the Bloods gang will avoid using the letter c and then swap it out with the letter ‘b’.

Another Redditor identified himself as an expert, saying that it extends all the way back to an older and additional time where the meme page was recognized that the culmination of many different years of increasingly sarcastic meme-ing. He said that the Neiman self doesn’t actually have any traditional intrinsic value. The letter itself is bluntly presented as a nonsensical representation, merely a recognizable inside joke It’s a rehab of earlier formulas that were attempted to keep things new and fresh.

What’s the „E“ in combination with Lord Farquaad Meme? from OutOfTheLoop

More Redditors from out-of-the-loop jumped in, saying that originates from deep-fried memes. They took turns explaining the origin, saying it’s really just a funny-looking face that is supplemented with a grainy filter and then added with the letter e. Others say that the E represents how memes are becoming increasingly self-referential, thereby increasingly and inherently meaningless.

Although it doesn’t actually have any inherent meaning outside of its face value, lacking thorough context to its cultural significance makes it even more confusing.

The E meme is one of the most surreal and totally bizarre memes out there. In a way, it’s a comment on internet culture and how quickly the meaning of certain images and words can change. While the E meme hasn’t been as popular lately, we can definitely expect to see more deep-fried images in the same style popping up all over social media.