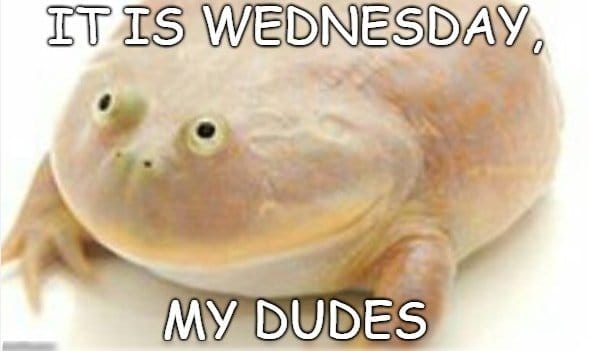 The “It Is Wednesday My Dudes” meme refers to an amusing image of a Budgett’s frog coupled with the phrase “It is Wednesday, my dudes.” The comical image is frequently parodied due to the entertaining appearance of the frog, which is also renown for its unusual vocalizations (Source).

After its Tumblr success, it kicked around the internet a bit, with a popular Vine user giving it another viral repurposing:

The JimmyHere Viner recreated it a bunch of different times wearing different costumes and in situations.

Since then, it has been remixed in a ton of different ways, including this imaginative music video called “Wednesday Finale” from ZimoNitrome:

Another YouTuber compiled some of the best clips- creating a mashup of Wednesday-dude hilarity:

Below, we curated some more of the best memes, including some interesting retakes on this popular phenomenon:

Drugs comparison and Wednesday my dudes There are a lot of images about how drugs can change your appearance, especially the eyes, and many of these images are frequently used to create new memes every day. This was the case with the viral frog, since you can see it in the last part of the image with the word “Wednesday”. Here’s another example of the viral meme using the same frog, but instead of saying “It is Wednesady”, it says “It is bedtime”, and the frog wears a sleeping hat in order to represent with more precision the message. This was first posted on KnowYourMeme and afterwards shared on social media platforms. Sometimes good memes are created with just a simple twist. In this case, you can see a picture with a poorly draw frog and the expression of It Is Wednesday My Dudes but in an extremely literal way. This post was one of the popular response on Tumblr to the original meme.

Pingu and It is Wednesday My Dudes Pingu is a famous cartoon in British culture that was first aired in 1990, showing the occurrences of a family of penguins, including the most memorable character (its protagonist): Pingu. This little penguin has been one favorite topic to create many memes, and that’s why a user decided to keep it for a variation of It Is Wednesday My Dudes, but using the “Noot Noot” as the sound Pingu does in some episodes.

It’s time to stop my dudes This meme was a huge hit back in 2014, but there were some haters too, and also some people who just wanted to make it stop. One anonymous user made this version of “It is Wednesday my dudes” but using the “It’s time to stop” meme, with the face of the guy, his sunglasses and obviously a clock. This is an obvious reference to demonstrate that there were internet users who didn’t want to keep seeing the meme. Here’s a popular meme with a picture of JimmyHere Viner wearing the typical glasses he had for the “It is Wednesday My Dudes” vines, but as a comparison to one picture of Hillary Clinton wearing sunglasses. This post appeared on KnowYourMeme and since then was shared on Facebook and Twitter as a political joke.

It is not Wednesday, my dudes 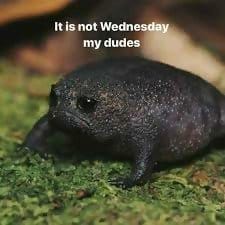 An anonymous user via Reddit created a funny variation of It is Wednesday My Dudes, but this time saying it’s not Wednesday, and instead of a Budgett’s Frog, you can see here a small black frog with a sad face, probably to represent that it’s sad ‘cause it’s not Wednesday yet.

It is dudes, my Wednesday Sometimes the best memes are the simplest ones. You can have an example with this picture, just having the original meme but putting the frog upside down, and exchanging the words, so now you read “It is dudes, my Wednesday” as an obvious joke to it. Even being something so simple shared on Reddit, many users decided to share it in social platforms like Facebook and Twitter. Following the simple jokes, here’s another hilarious pic related to the original meme, but with the comment that it’s already Wednesday in Japan. To complement the joke, this internet user decided to put a Japanese cap on the frog.

Lord of the Memes and a frog Nowadays when you see a frog on the internet, you can’t stop thinking about “It is Wednesday my dudes”. This happened here, since an internet user decided to associate an antique painting of a frog with the viral meme to recreate a joke shared multiple times on social media. The first post appeared on KnowYourMeme.

It is Wednesday, my dudes and dudettes (/r/minnesota) from mistyfront

This meme capitalizes on the term- referencing the apparent fact that in Minnesota tornado sirens go off on Wednesdays.

[Map] "It Is Wednesday My Dudes" Species Niche Model from NoSillySuffix

In this image, a weather map resembles the popular frog meme- an amusing reference for those in the know.

It is Wednesday, my dudes from ImagesOfFrance

This meme employs a translation tool- a funny reinterpretation of the meme.

IT IS WEDNESDAY MY DUDES from ImagesOfCanada

Apparently Senator Wednesday frog is not a pugnacious representative of the people up in Canada.

It is Wednesday, my dudes from memes

Here we see the now-iconic frog holding some sparklers like he’s celebrating the Fourth of July. But actually it’s New Year’s, the final Wednesday of 2018.

It is Wednesday my dudes from memes

In this meme, Pooh and Piglet are having a conversation about the day of the week. It’s somewhat dark, but the user who screenshot it found a way to reference the Wednesday Dude meme.

It is Wednesday my dudes AAAAAHHHHHH from memes

It is Wednesday my dudes from AnimalCrossing

You can imitate anyone’s voice but can only say "It is Wednesday my dudes" in that person’s voice and only on Wednesdays in your current timezone. from shittysuperpowers This one is a bit more arcane- if you go to the University of Illinois Urbana-Champaign, you can probably explain this one to us.

Weekly reminder that it is Wednesday, my dudes. from hearthstonecirclejerk

A spirit of the frog spell helps serve as a weekly reminder that, indeed, it is Wednesday, my dudes.

it is Wednesday my dudes from CalamariRaceTeam

It is Wednesday my dudes from Dragonballsuper

It is Wednesday, my dudes from startrekgifs

It is Wednesday my dudes from memes

We don’t really get the reference here- it’s a pretty bizarre image given how happy go lucky Labradors are.

It is Wednesday my dudes… from Honda

Reference is a little obscure with this one as well- maybe Honda aficionados can explain it.

It is Wednesday my dudes from wow

IT IS WEDNESDAY MY DUDES. 128 UPVOTES AND I’LL POST TWICE AS MANY RIVER FROGGEN IIs. from ShitpostPathTraveler

The impact of internet can be felt socially, in the professional sector and even in educational fields. One of the products of continuous internet use is the creation of memes that has grown rapidly. Memes starting becoming part of daily human lives years ago and by 2011, it was incorporated into a university’s syllabus showing just how much impact they have on society. Since then they have grown in popularity and use.

Meme creation presents an endless pool of ideas which means that there’s no limit to how many memes of what type one can come up with.

One of the most popular memes that has been used since a year ago is the “it is Wednesday my dudes meme” which involves use of Budgett’s frog. Also known as Wednesday frog, it allows people to explore different ways of passing their message across. The main reason for using this frog is the way it looks. This type of frog usually has an appearance that is considered funny.

It has a very big head that takes up to one third of the entire body accompanied by a very large mouth as well. This frog usually thrives in shallow water and very fat, with short limbs that are not webbed. The sounds made by the frog has also favored it as a good meme creation object on Wednesdays.

It is Wednesday my dudes meme was first created in 2014 by a Tumblr user. It made its debut there and has since been an internet sensation being used every Wednesday. The user named kidpix2 gave the meme the meme a title “Wednesday” which explain why it is only used for Wednesday.

One of the common uses of the meme is to pass a message across in a funny manner. One can express their thoughts by incorporating this frog into a message they want people to get. You just have to ensure that the message is “relatable” and relevant.

Another use of this meme is to entertain readers as well as the person creating it. It provides a good way to relieve boredom and put one’s creativity into practice. As the meme is being created, a person is encouraged to use different lines and modifications of the frog to create what they want.

It is Wednesday my dudes meme can also be used to promote a business or brand. Since memes have the potential of being shared fast across different internet platforms, using the frog with a message relating to your brand will ensure you reach a wider customer base in a short time.

This meme is funny, creative and can be informative. Its popularity has continued to grow and is only showing signs of doing so.

If you’re into meme culture, you’ve probably Heard about “It is Wednesday my dudes”, an international meme that refers to an amusing image of a Budgett’s Frog with the popular phrase. This image is already a notorious reference of the meme due to its unusual vocalizations and similar appearance to the origin of this meme.

The first time that this meme appeared was on Tumblr, when user called “kidpix2” created the image with the popular frog. After that, there were hundreds of variations of the original image with different purposes. And even a vine went viral thanks to this idea. The JimmyHere viner was the one who decided to recreate the meme with a lot of different costumes and situations. Since then, there’s been a lot of random creations with the main topic of “It is Wednesday my dudes”.