There are two things that are known to be true about English actor Benedict Cumberbatch: he’s one of the most talented actors around, and he’s also got an insanely expressive face.

Having an expressive face is of course part and parcel of being a great actor, and Cumberbatch’s acting prowess has garnered him roles in a range of movies from Dr. Strange and Avengers: Infinity War to 12 Years A Slave. However, the offshoot of his expressive face is that Cumberbatch has been the subject of a fair share of memes. A fair number of these memes are dedicated to comparing Cumberbatch and an otter: if it sounds like an unlikely combination, just wait until you see some of the memes that Tumblr users and internet explorers have come up with!

Where it all began

This meme craze started thanks to the BBC’s Sherlock, which premiered in 2010. Benedict Cumberbatch played the famous Sherlock Holmes, while his sidekick John Watson was played by fellow veteran Martin Freeman (who also played Bilbo Baggins in The Hobbit). To this day, many consider Sherlock as the role that made Cumberbatch a household name; Gala Bingo UK’s poll on England’s top fictional crushes places Cumberbatch’s Sherlock in second, just behind Danny Dyer’s Mick Carter from Eastenders. Cumberbatch gives a sense of gravitas and neuroticism to the well-loved detective, which makes the comparison with fluffy otters even better. Below is a roundup of the best Sherlock otter memes. 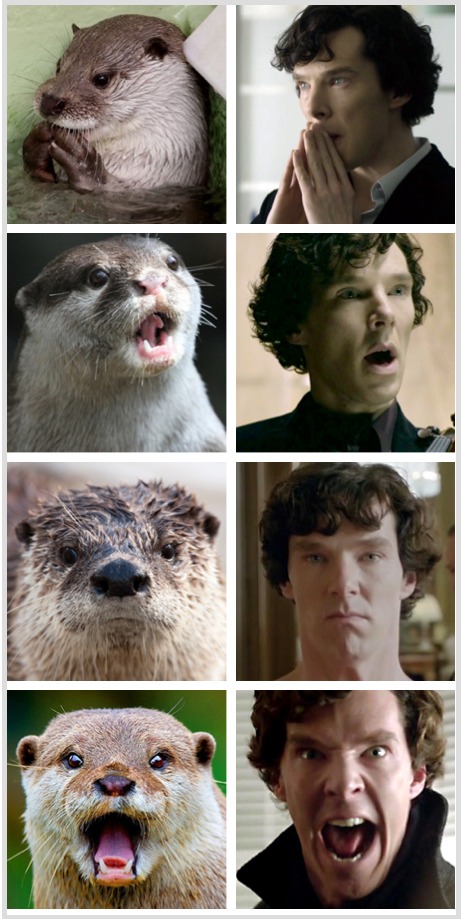 This initial comparison was posted by Red Scharlach on Tumblr, and Know Your Meme credits it as starting the “Benedict Cumberbatch Looks Like an Otter” trend. The photo set starts off strong, comparing Sherlock puzzling over a case with an otter deep in thought. 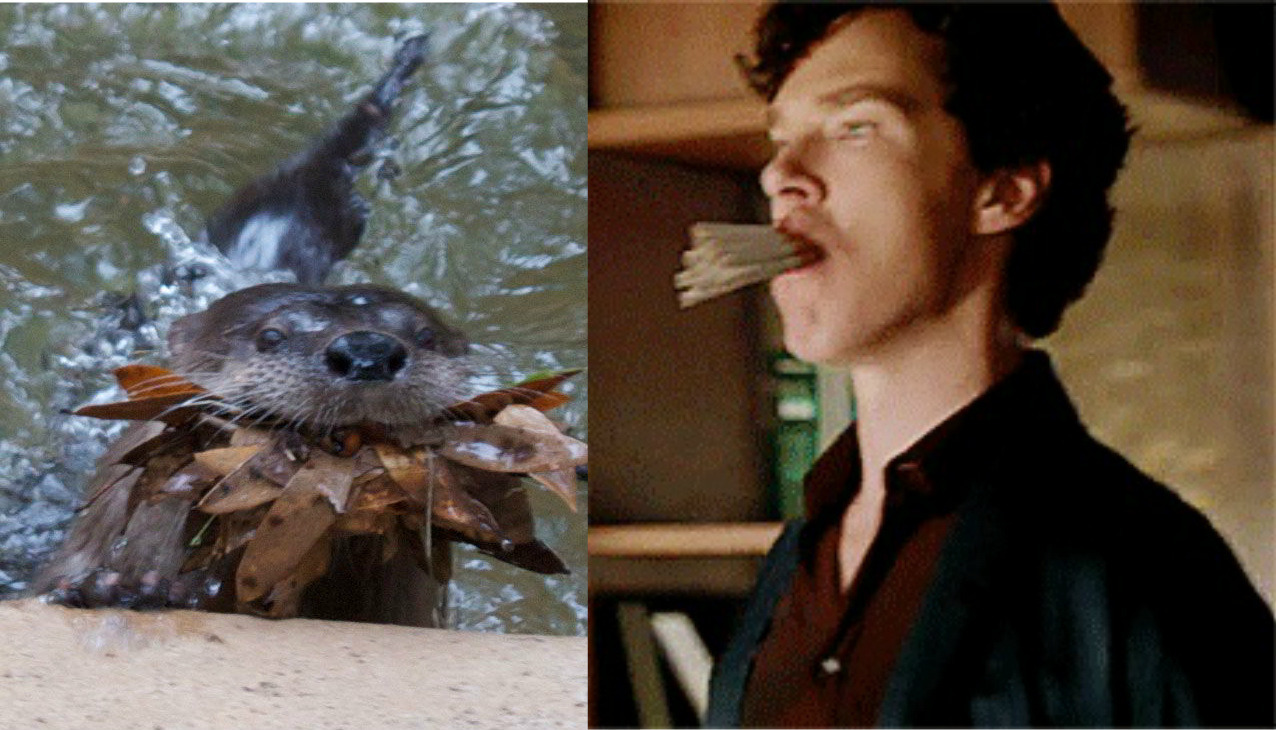 Other Tumblr users quickly caught on, finding other comparisons such as this one: Sherlock has several cigarettes in his mouth, which is not unlike this otter with a mouthful of leaves. 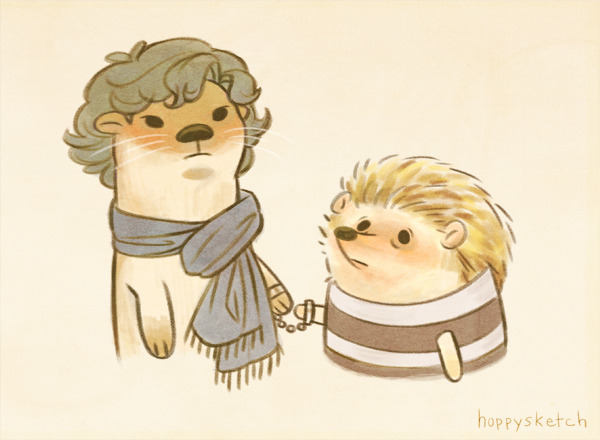 Of course, the comparisons between Sherlock Holmes and otters inevitably led to the creation of some great fanart. Tumblr user Happysketch drew this adorable take on Sherlock as otter and John as a hedgehog, otherwise known as Sherlotter and Hedgejohn. Another fanart take included a slim otter with Sherlock’s trademark blue scarf draped across its neck.

It was only a matter of time before these comparisons left the Sherlock world and branched into other aspects of Cumberbatch’s career. Cumberbatch himself has been interviewed about these otter comparisons, which the actor always responds gamely to. Here are a few notable takes.

One of the most popular post-Sherlock meme troves came in a 2015 Graham Norton segment, where the TV show host asked Cumberbatch to pose as otters on the spot. Notable comparisons include one with Benedict snuggling up against a giant teddy bear and him recreating a photo of three friendly otters with the help of Norton and fellow guest Johnny Depp.

Two years before the Graham Norton segment, reporter Chris Van Vliet brought up the otter memes while interviewing Cumberbatch about Star Trek: Into Darkness. Cumberbatch says he found out about the meme by having someone “thrust it in his face” while on set, and admits he finds the comparisons hysterical. 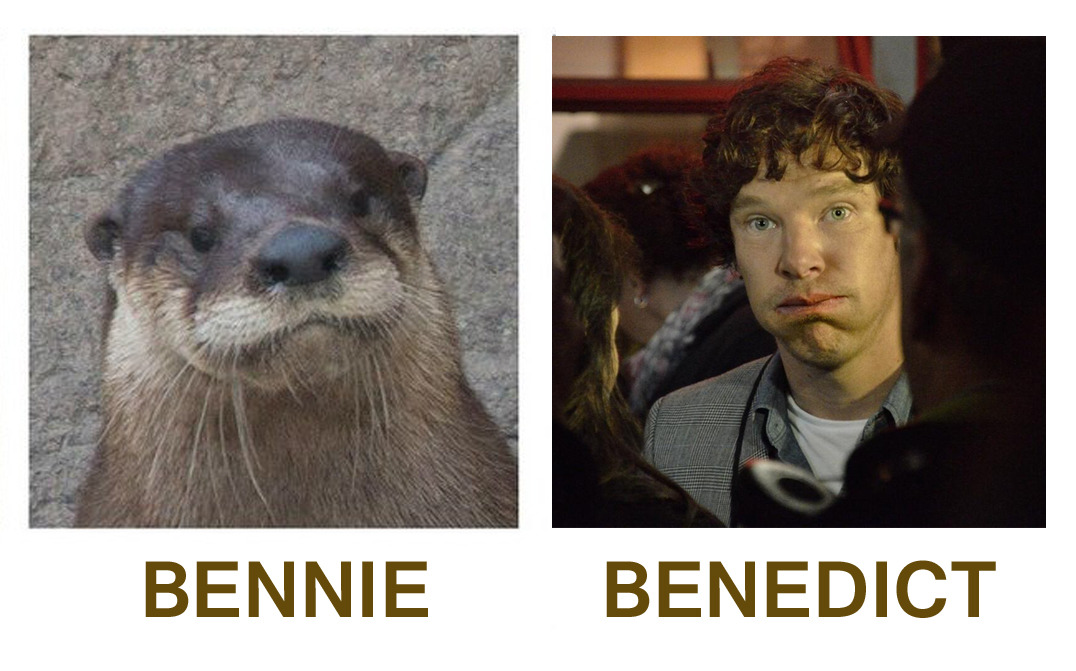 A Tumblr account called “Benedict vs. Otters” created several comparisons of the English actor and the adorable mammal, but life truly imitated art when the account compared Cumberbatch to Bennie, an otter from the Tennessee Aquarium. Cumberbatch’s puffed-up cheeks in the photo are an eerie match to the otter’s own.

7. A mammal out of water 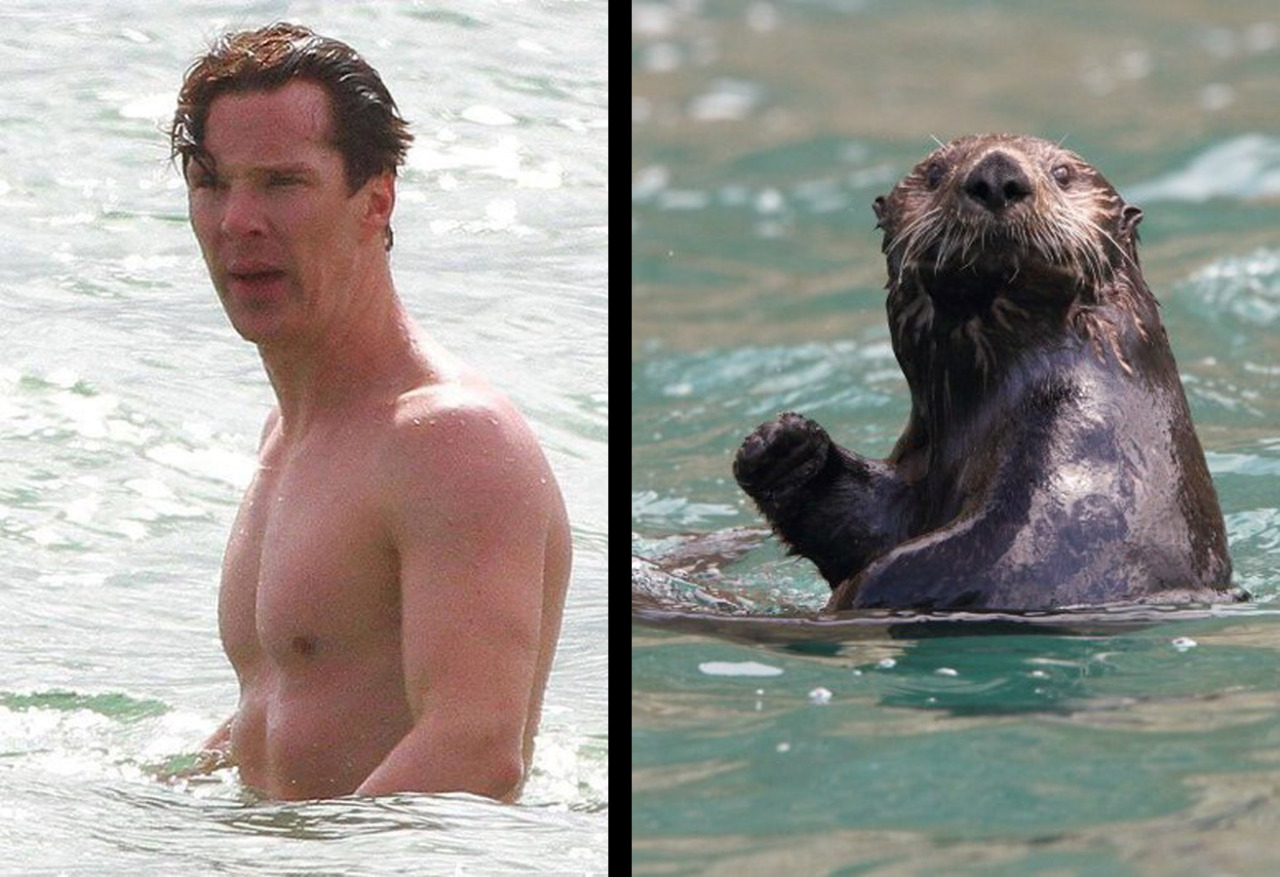 Speaking of the “Benedict vs. Otters” Tumblr account, one of its most popular posts includes a picture of Cumberbatch standing in the ocean looking a bit perturbed, just like this otter who is a bit confused as to why paparazzi are following it.

Old habits die hard, and this saying is perfectly encapsulated in the side-by-side of The Imitation Game and The Limitation Game. This movie may have premiered four years after the first episode of Sherlock, some comparisons just stand the test of time. 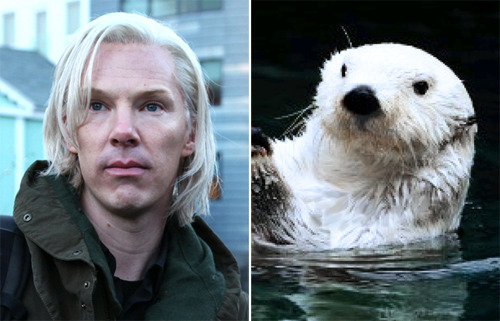 While Cumberbatch is mostly compared to Asian otters, kedgeree11 on Tumblr posted a picture of this white sea otter against Cumberbatch’s portrayal of WikiLeaks founder Julian Assange.

Otters aren’t the only animals that Cumberbatch seems to have a weird relationship with. In yet another Graham Norton appearance, Cumberbatch was grilled about his constant mispronunciation of the word “penguins.” The fact he was narrating a 2014 BBC Two nature documentary was, for many fans, the true icing on the cake.

While comparing Benedict Cumberbatch to otters does seem like a bit of a stretch, do enough digging and you’ll find a dozen comparisons made by gleeful fans. This meme trend encapsulates the well-meaning absurdity that lives online and just goes to show that having celebrities respond to their own meme makes the trend ten times better.

The 25 Best Omae Wa Mou Shindeiru (You Are Already Dead)...