A funny meme that has spread across the Internet in recent years is the “who would win” meme featuring two people or objects that would compete against one another in a hypothetical situation.

The origin of the Who Would Win meme first originated back in 2010 on the popular website 4chan. A user created a thread on November 21st, 2010 on the site in which they asked other users to “speculate “who would win” in a battle between the video game characters Solid Snake and Sam Fisher” (Source). Then, someone else- user isaacshadow- took a screenshot of this thread and posted it on the FunnyJunk website.

The meme is supposed to have a white background with two columns, similar to a table that one would draw in their math class. The table is split down the middle. Above the table is the question “Who would win?” followed by two pictures in each column with their captions.

Rome VS Some Weird Mountain

Who would win? from tumblr

It does not necessarily have to make much sense, and the two competing forces do not have to be humans (though many people created funny versions of the meme with notorious people).

Who Would Win (/r/magicthecirclejerking) from mistyfront

Despite the fact that the meme had been created in 2010, it first spread around in November of 2014 when someone posted it on 4chan and asked people whom they believed would win when having to choose between a stick and 1000 US Marines. Then, someone else posted the iconic “who would win” meme featuring jet fuel and steel beams (a reference to 9/11 conspiracy theorists who believe that the terrorist attacks were fake because jet fuel can’t melt steel beams) on Reddit in January of 2015.

After the image was spread on 4chan and FunnyJunk, another user on 4chan helped to contribute to the meme’s popularity in February of 2015 when they posted their own version of the Who Would Win meme. In their version, they compared 1 trillion lions to the sun and asked people to choose which one would win in a fight. The reason why the meme became so popular is because someone commented under it, “the lions would win if they attacked at night.”

Tumblr user shrekyourself then made the meme popular again when they posted a picture actor Jeff Goldblum against himself and asked people to decide who would win in a fight.

In August of 2016, the Harambe meme and Arthur the Aardvark’s fist were popular memes online. A Reddit user, SpookySpookist, created a version of the “Who Would Win” meme where Arthur’s fist and Harambe were against each other. 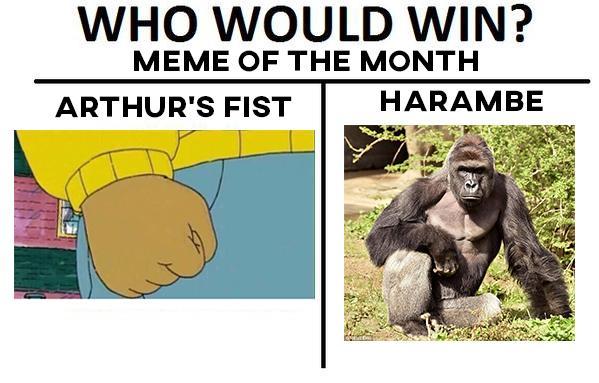 Then, another Reddit user, dank420memes1337 posted a version of the meme that was centered around the popular show Spongebob Squarepants. In the meme, the user had pitted a “boy with autism” (Spongebob) against an “amputee Vietnam veteran” (Patrick).

The meme also became popular with the UNITINU mirrored camera. People would take images of other people and have them mirror one another to create a warped version of the image. One of the most popular versions of the meme featuring this camera effect was of former President Barack Obama. It said, “Who would win? Obabo or Amama” and had two mirrored images of the former president. Several more spread across the Internet, including ones of Joseph Stalin and Adolf Hitler.

Stick vs. US Marines One of the earliest versions of the meme where someone pitted a stick against 1000 members of the US Marines. One of the original versions of the meme where someone wanted to know who would win in a fight between one trillion lions and the sun. Someone commented that the lions would win if they attacked at night. A version of the meme in reference to the 9/11 attacks, where some people believe that the attacks were faked because of allegations that jet fuel can’t melt steel beams.

Who would win? from memes

Who would win from ImagesOfTexas

Who Would Win? from libertarianmeme This was posed in 2016 when Arthur’s fist and Harambe were popular memes. A version of the meme that became popular in 2017 using the UNITINU camera effect. This particular version featured warped images of Barack Obama.