Recently, many internet-culturalists seem to have fallen in love with the rhyming ‘elf on the shelf’ meme. The meme is everywhere on the internet.

But if you are not aware of it, we’ll explain the origins and show you some of the best memes from around the internet.

The Story Behind The Elf On The Shelf Meme

An elf on the shelf is a Christmas elf decoration. Around Christmas time, it sits on the shelf of every home that has children. The elf watches over the kids and tells Santa on whether the names of the children should be included in the good or bad list.

But the internet fiends have given a new meaning to elf on the shelf- hilariously converting it into a simplistically rhyming meme.

Meme creators from all over the world showed their creativity by using the phrase ‘You’ve heard of Elf on the Shelf’ and then posting a picture of a variant meme.

The meme really emerged, according to KnowYourMeme, on December 3rd, 2016, a Tumblr user called fuckin-rockets published a variation of the meme using the expression “You’ve heard of Elf on the Shelf.” Beneath that caption, they submitted an image of an Ash Ketchum action figure in laying inside of a trash can (the suggested rhyme was”Ash in the trash”). The post received greater than 53,000 notes within 10 months.

Take a look at some of the hilarious renditions of the meme.

The Best ‘You’ve Heard Of Elf On The Shelf’ Memes

Trump In The Dump This hilarious meme of the US president Trump in the dump began to surface everywhere on the internet after China said it has had enough of garbage from the USA and decided to send them back. Earlier, China used to ship in plastic waste from the US which was used to make goods like bags and shoes.

Taylor Swift in a Swift The surname of the famous pop sensation, Taylor Swift definitely rhymes with the brand name of the popular car, Swift. One of Tay’s followers decided to make a meme out of it and well, it is funny. If Taylor stumbles upon this meme, she’s certainly going to ‘shake it off!’

Abed In A bed You will find this meme hilarious once you are able to decode it. It’s ‘Abed in a bed’ and yes, apparently, the guy in the bed is named Abed. If you have a friend who goes by this name, you can pass on this joke and have a good laugh at the expense of his name.

Snape On A Vape Harry Potter fans will be able to decode this meme in an instant. Snape is one of the most misunderstood and beloved characters in the Harry Potter series. He is the Dark Lord. And you never really know which side he is on. Well, no wonder fans decided to make a ‘snape on a vape’ meme and it is hilarious.

Trump On A Stump Jimmy Kimmel revel on making Donald Trump the punchball in his hilarious Live TV show. Ever since he took the holiday tradition of ‘Elf on the shelf’ and turned it into a scary alternative of ‘Trump on a stump,’ the internet started flooding with memes of the president. Trump is often trolled for his outrageous speech and conduct.

Ash In The Trash The Pokemon series and game were both once very popular among people but it has lost its popularity now. Ash Ketchum, the main character of the Pokemon anime is seen lying on a pile of trash in this meme. When his name is Ash, no wonder his place belongs in the trash. Well, it is only a joke.

A Trooper On A Pooper A toilet is a popular place for gamers to play mobile games. Yes, people are potty about mobile gaming. But which place is safe from mobile gaming addiction? None. This meme creator must have played PUBG while sitting on the toilet or is he/she exasperated by the trooper in his/her house who takes too long to come out of the toilet and make people wait.

Pope On A Rope 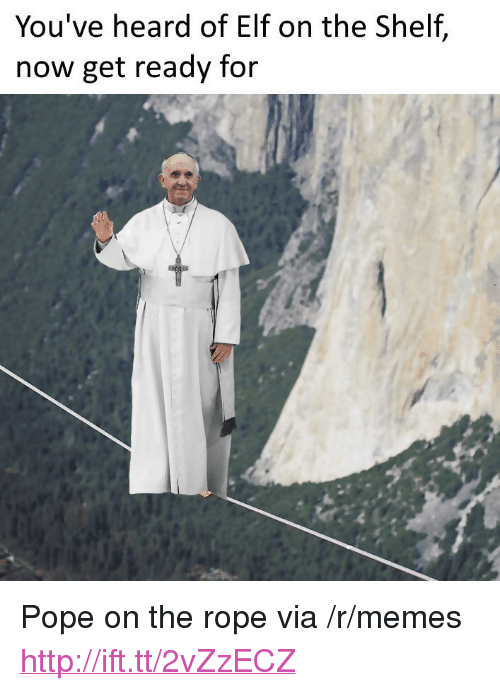 This is one of the most hilarious ‘Elf on the shelf’ memes. Apparently, you can see a pope standing on the rope wearing a robe and he looks infallible. Actually, there was a time when everyone wanted a Pope Soap on a Rope so that they can kit out their bathroom just like the people do in the Vatican.

Santa On The Fanta This meme is funny, even more so as it rhymes ridiculously well. But imagine if a Santa comes riding on a Fanta instead of his usual sleigh ride? Well, we will have to wait and see. But it’s good news for Fanta lovers. It looks like the beverage is not caffeinated.

Ferrel On A barrel Here is another meme that rhymes perfectly well. The meme is actually funny as Will Ferrell has acted in a movie called ‘Elf,’ a 2003 American Christmas comedy film. In the movie, Will Ferrell plays the role of Buddy, aka “Buddy the Elf”, an eccentric human who was raised by Santa’s elves.

Obama On A Llama Even the then president of the United States, Barack Obama was not spared by the ‘Elf on the shelf’ meme creators. This meme surfaced when Malia Obama, the eldest daughter of Obama made a secret trip to Bolivia. Llama is the national animal of Bolivia and the surname Obama rhymes with Llama.

You have heard of Elf on the Shelf. Now get ready for… Joy the Baker came up with a funny, hilarious new series, “Drake on a Cake.” You can now actually read Drake’s lyrics on the beautiful cakes baked by Joy the Baker. After all, who would refuse a slice of Drake’s catchy lyrics? There are funny people all around.

Morty On The Forty This meme is surely created by someone who watches Rick and Morty. Morty Smith is one of the main protagonists in the series, a good-hearted but easily distressed 14-year-old who is easily manipulated and dragged into misadventures by the other protagonist Rick. Well, Morty on the Forty? It does rhyme.

Evee on a Tv On 17th September, this witty Elf on a Shelf meme was posted by user @nsarmored frog on Twitter. It received more than 27,000 retweets and 58,000 likes in two days. Well, it looks like it did not take long to get viral. Pokemon fans will know Evee better. But everyone seems to be enjoying the meme.

Whenever we are confused about a meme or just want a more detailed back story about it Origins, we frequently defer to read it. One of the popular subreddits over there for explaining confusing internet phenomenon is called out of the loop.

What is an "elf on the shelf"? from OutOfTheLoop

Two years ago a Redditor posted, saying that he is confused about the Elf on the Shelf phenomenon. He hypothesized that it was a Christmastime phenomenon and though he’s heard a lot of people talking about it he can’t really understand what it’s all about.

One of the top responses came from a user said that the phenomenon has been around for a couple of years now. He said that in a nutshell, it refers to a strange and freakish looking toy that comes with a children’s storybook.

The Elf that comes with the book is placed on a shelf in their bedroom and allegedly is reporting the child bad behavior to Santa Claus.

He expounded on this, saying that a lot of people thought it was pretty creepy and that it was desensitizing children to the idea of a surveillance state.

It also constitutes a form of emotional blackmail and might be unhealthy for the psyche of kids. However, another Redditor said that the idea that it is a deep conditioning tool for autocrat is pretty ridiculous.

In his own house, he moves the doll around every so often to convince his kids that it is looking after them. This has dramatically reduced the incidence of bad behavior in his household, something that he finds funny and also provides a benefit to household tranquility.

Another person said that it has evolved into a where’s Waldo Style game. Their kids have fun searching for it around the house. The parents find creative and inventive spaces to hide the elf and the kids scramble around all afternoon hunting it down.

Another Redditor, as is their wont, discovered some satanic meanings inside of The Santa Clause myth. They say that the popular Christmas lyrics “He sees you when you’re sleeping, he knows when you’re awake. He knows when you’ve been bad or good, so be good for goodness sake.” Could also be viewed as conditioning children to accept the surveillance state.

Others wondered whether they had ever been technologically upgraded to accommodate the installation of stealth microphones and cameras, perhaps even a frequency hopping burst transmitter.

Merry Christmas, friends! We hope it’s one of the best yet! . . . . . . #ElfontheShelf #ElfonaShelf #MerryChristmas #ElfonShelf #ElfPets

There was a bit of an argument about when they initially appeared, what song people saying that they emerged in the 1960s and 70s, while other people only became familiar with it in the early 2000s.

It’s definitely a fun meme – it invites a lot of participation because it’s easy to find rhymes as opposed to other memes that sometimes are difficult to generate new content for.