If you’re a fan of the old cartoon character Bugs Bunny, chances are that you have come across the Big Chungus meme, which was parodied as a fake game for PlayStation 4.

The original image for these meme dates all the way back to the December 20th, 1941 episode of the cartoon “Wabbit Twouble.” In this episode, “Bugs is mocking Elmer Fudd, who in this cartoon was made much more portly than his previous and more iconic design” (Source). However, while this was a funny cartoon, it did not end up becoming a meme until much later, and is actually one of the more recent memes that we have covered.

For some who may not be aware, Bugs Bunny is a cartoon character that was created in the 1930s. He is a large gray rabbit that has a Brooklyn accent.

In all the episodes and shorts that he appears in, he is known for having a trickster and cunning personality.

He is most well-known for his catch phrase, “Eh, what’s up, doc?” Bugs Bunny is one of the most famous animated figures in American pop culture and eventually became “the official mascot of Warner Bros. Entertainment” (Source).

Images of Bugs Bunny have appeared all over the Internet and he has been featured in many shows, songs, films, rides at amusement parks, commercials, and more. He appeared on the animated shows “Looney Tunes” and “Merrie Melodies.”

A lot of people agree that the first person to end up using this word was a freelance video game journalist named Jim Sterling, who used the term on a number of different occasions without any description of what the word’s definition was.

He used it quite frequently to describe a lot of different things. Most people agree that he started to use the word before the end of 2012. According to Urban Dictionary, the word is “said to mean anything and everything” in one definition, and “an overweight giant earthdestorying, god killing rabbit” in another. This is a funny meme shared via social media, but initially posted on CheezBurger.com. Someone took a picture of this chubby bunny and it was the perfect option to add a phrase related to Big Chungus. Here you can read that Big Chungus got popular enough to be a real thing. 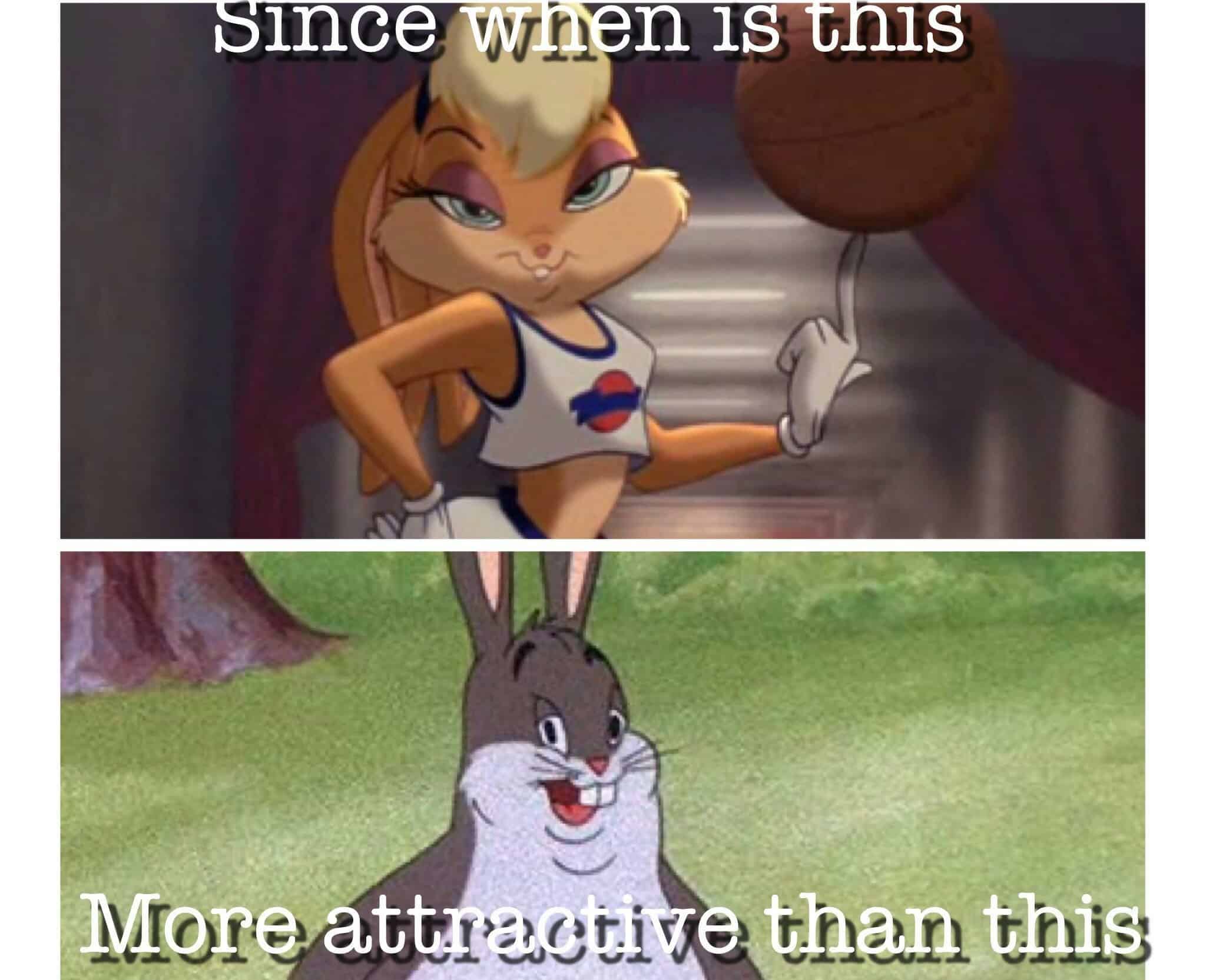 This popular meme is a parody of many pictures around the Internet related to compare people according to their appearance, most of time making it with thin girls vs. more curved girls. In this case, an internet user decided to use it with Bugs Bunny as another funny example of Big Chungus memes. The animated and popular movie of The Jungle Book was used in this case as another parody for Big Chungus. This meme keeps the original poster of the movie, but with Bugs in the front, and a notorious pun with the title, calling it “Chungle Book” instead of “The Jungle Book”. This was first shared via CheezBurger, and then all over different social networks like Facebook and Twitter. 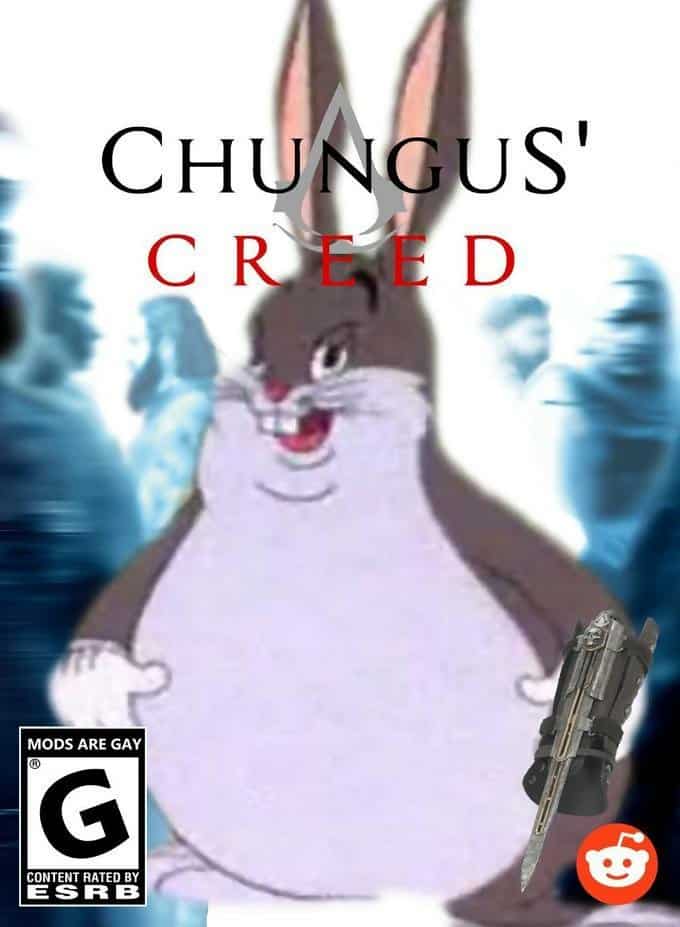 One of the first appearance of Big Chungus was as a fake PS4 game, and since then everyone decided to create their own version of this popular meme. That’s why an Internet user via Reddit decided to create a representation of the meme with Assassin’s Creed, simply calling it ChunguS’ Creed, with the big bunny in the poster and one of the letal weapons used in the original game. Someone on Reddit decided to put this funny meme with a comparison between the oversized Bugs Bunny and Big Buck Bunny, a popular character in an animated movie that has been used in many jokes before, especially in memes all around the Internet. In this meme you can see the comparison related to resolutions, which is a typical topic to mock of when creating the difference between 2D and 3D cartoons.

Thinking of an original joke 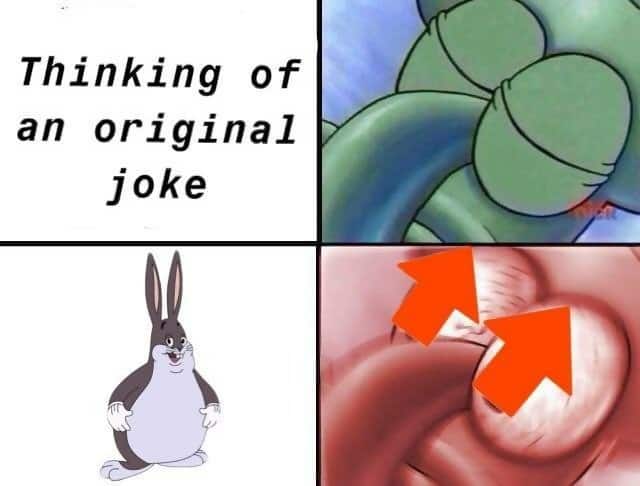 Big Chungus has been a meme shared multiple times not only on social media, but on many websites like Cheezburger, KnowYourMeme and Reddit, and this made the meme something not as original as it was on the beginning. That’s why an internet user created a meme with the Sleeping Squidward and Big Chungus in order to mock of the lack of originality to some creators. It’s not a secret that in Reddit a meme can get old very quickly, being changed for a new one with few days of difference in many cases. That’s why someone decided to joke about it creating a meme related to Big Chungus with the famous “Andy throwing away Woody”, as an interpretation that only on Reddit this meme had a huge fame for a week and then everyone forgot it.

In recent years, Netflix has decided to create adaptations of some popular anime series, like Death Note, but most of time it’s not well-received by the critics and the fans. That’s why someone decided to share this meme via KnowYourMeme as a joke about Netflix’ Adaptations but with Big Chungus. Big Chungus had a popular fame as a fake game for PS4, that’s why someone decided to create this meme with this famous scene of Thanos in Endgame in order to let you know that a game designer is capable of everything.

The image first began to be used as a meme on May 27th, 2017. A user on 4chan who was anonymous posted the image of an oversized Bugs Bunny to a board called /lit/.

The next time that anyone had posted the image was on July 19th, 2017 on the same board. A lot of other people had continued to post on this board for some time throughout the year.

Then, on July 21st, 2017, a screenshot of the 4chan thread had been uploaded to Reddit by user hollerbravo. It had also been posted to Facebook several days later in the group “Eclectic Memes,” and despite having been deleted, the thread was uploaded onto websites such as Me.me.

The first time that anyone had used “Big Chungus” in conjuction with the image of an overweight Bugs Bunny was in 2018 by Reddit user GaryTheTaco.

The image was posted onto a Reddit thread calles /r/comedyheaven on December 1st, and GaryTheTaco proved that he was the one to have created the image in a separate thread on December 19th.

He claimed that he simply got bored and made the meme, and decided one day to make it public. Then, he realized how popular the meme was when “my friend sent me a post from Faceb

ook of a kid who asked his mom for Big Chungus” (Source). Since the meme also includes “PS4” at the top, a lot of parents ended up going to stores to look for such a game for their children to play on their PlayStations.

Several GameStop employees shared stories on social media of parents coming in to ask them if they had this game in stock, not realizing that it’s a joke. One such story even gained a lot of attention on Twitter.

More versions of the image were created by GaryTheTaco at the end of 2018 and they were subsequently published onto the same forum as the original, /r/comedyheaven on Reddit. Several other Reddit forums included the image and people began to take it and upload it onto other video game covers. The original photo of the meme, which features an overweight Bugs Bunny along with the caption “Big Chungus” on a PS4 video game cover. This was created by Reddit user GaryTheTaco in 2018.

Thor chungus was cute tho. 👌 from EndgameSpoilers

When You Finding Out Chungus Isn’t A Real Game

Big Chungus will never be in Smash 😰 from dankmemes

I’m the original creator of Big Chungus AMA from BigChungus

If you’re a fan of the classic cartoon character of Bugs Bunny, then you probably already know the popular Big Chungus meme, which was a joke parodied as a fake game for PlayStation 4.

This meme was based on a famous episode of the cartoon “Wabbit Twouble” back in the 40s, since this episode was released on December 20th, 1941. In this memorable cartoon, Bugs Bunny mocks of Elmer Fudd, who by that time had an extremely different image from his more iconic and recent design. However, while this was a funny cartoon, it wasn’t a popular meme until much later, especially when years ago nobody knew anything about meme culture.

The meme itself was created on May 27th, 2017, when a 4chan user posted the image of a huge Bugs Bunny to a board called /lit/, and since then, many people decided to continue this joke and create more memes with the oversized Bugs Bunny, and use it as a “chungus”, a word commonly used among gamers as an association for “chubby”.