When the famous video game-themed webcomic “Ctrl+Alt+Del” released an overdramatic cartoon strip, many people decided to mock online and take advantage of this strange creation, leading us to the Loss meme, also known as CADbortion, Loss.jpg, loss edit meme, line meme, and “I II II I _” (Source).

The plot of this strip refers to a woman who suffers a miscarriage, something unexpected for many readers since it was considered by many too dramatic for the comic, and marked an important change from the usual comedic tone. Since its release on June 2nd, 2008, many people took part of a worldwide and anti-fandom mockery with many creative variations of the comic, evolving into a funny meme that is still shared on social media and receives a lot of attention, especially among gamers (Source). 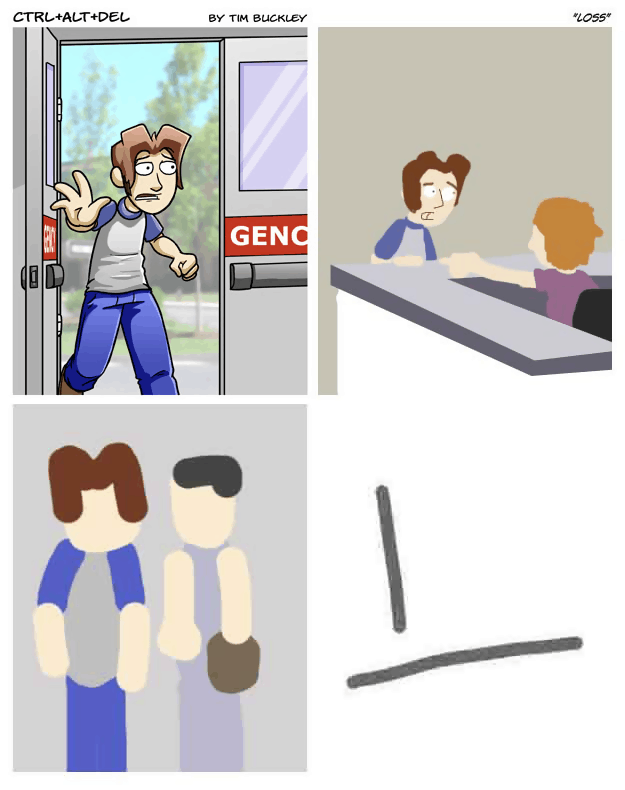 This was a creation shared on a KnowYourMeme page which shows a fusion between Increasingly Verbose and Loss. Increasingly Verbose is another famous meme used to represent graphics or drawings getting worse every time, and in this case it was used with Loss as a funny parody of the ending in the comic strip with a “I _”. This popular scene from the animated movie Despicable Me gave us “Gru’s Plan” meme, and this was a perfect occasion to use it with Loss. In this case they used the typical “I, II, II and I _” reference that’s been another alternative name to the Meme.

Thai Political Crisis and a Loss 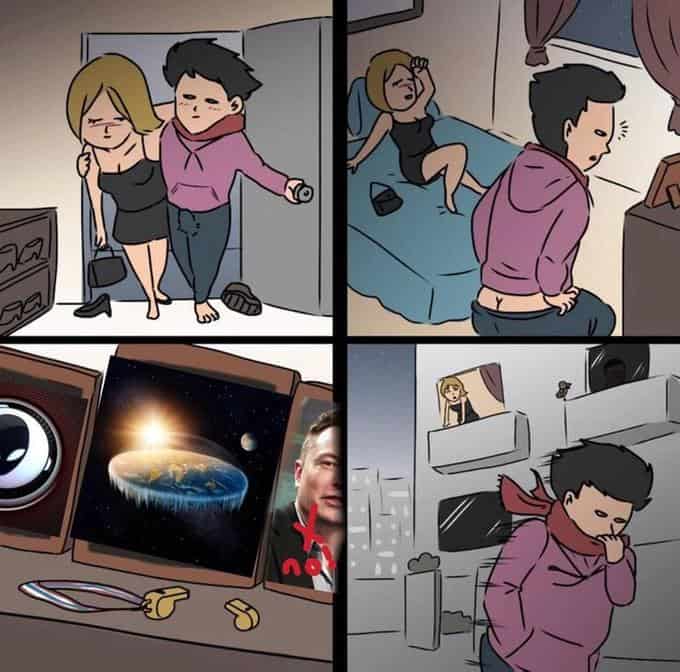 A funny spinoff shared in Reddit that took part in the “Thai Political Crisis Break Up” but with a twist. This is another usage for the Loss meme that’s been well-known among internet users, especially for the four-panel comic style. This one, in particular, includes a flat earth picture an anti-Elon Musk photo. Loss meme got included even in a Nancy’s comic strip. This popular cartoon from the 30’s and part of the 40’s was the base for this meme, a funny variation created by user UndeadKing1 and shared in Memedroid. And as you can guess, the ending is basically what many internet users think of “Loss”. 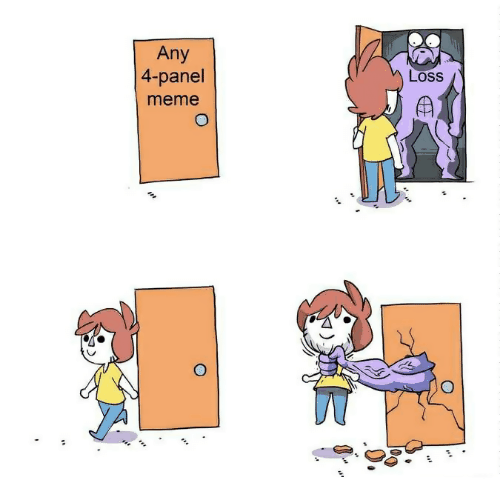 Shen Comics are very recognisable all over the Internet, and obviously he used his satirical and random sense of humor to create this parody four-panel comic strip based on the famous of “Loss”. It’s an strong reference on how nowadays any four-panel meme is automatically associated to “Loss” for many internet users.

Is this Loss with a Light Bulb? Mr. Lovenstein is a notorious cartoonist on Instagram, and he created this comic strip with what it seemed to be a normal story, until it was obviously an strong reference of “Loss”, reminding us again the popularity of it with the four-panel comics. This meme was first published on Instagram and then shared across social media.

Adamtots and a Donut Loss 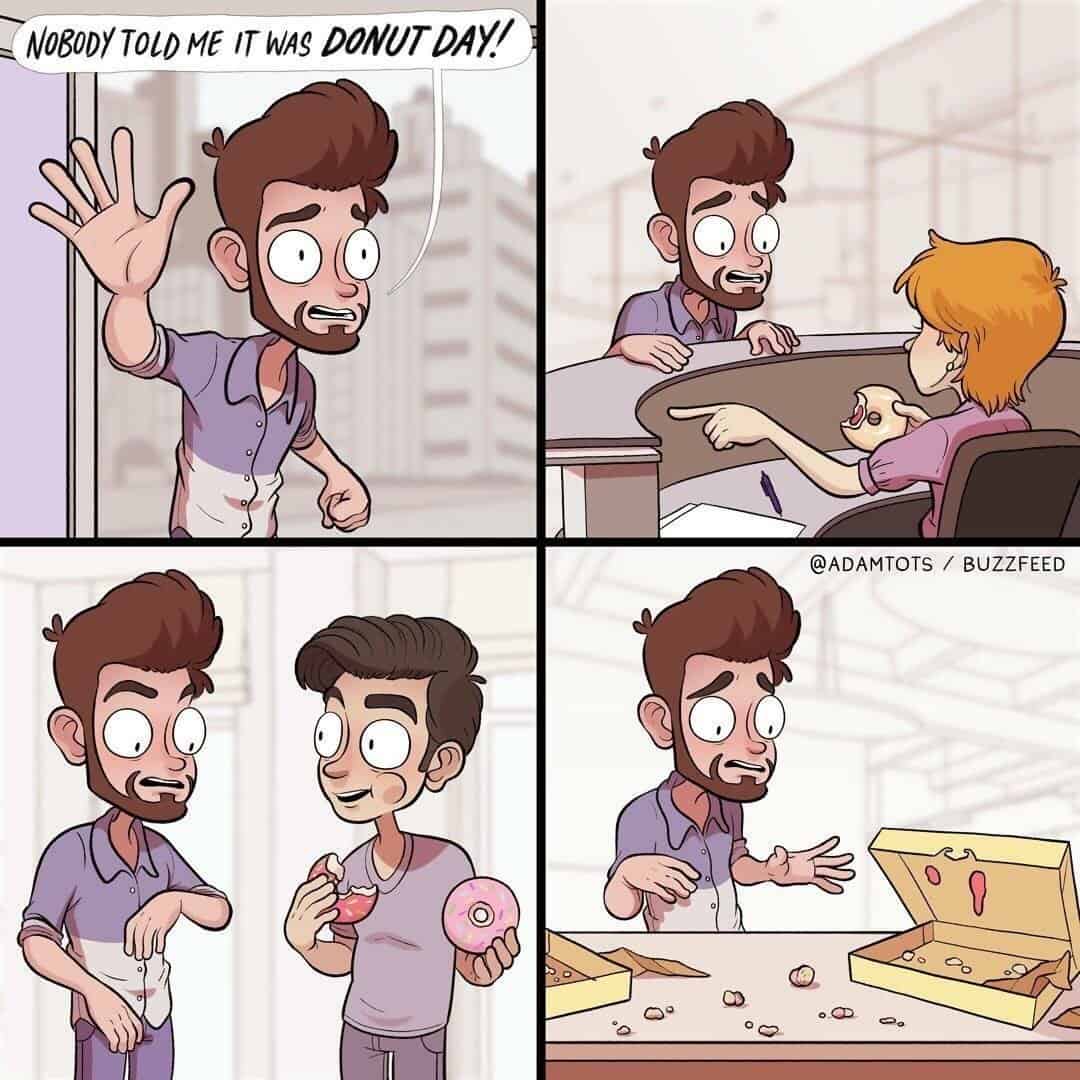 The famous cartoonist Adam Ellis shared a comic with the usual Loss reference, but this time related to Donut Day, making us feel sad that in the end he didn’t get the donut he wanted to. He obviously used the most recognizable points in Loss original comic strip.

A tattoo for a Loss fan This is a meme shared via Aminoapps that shows a guy extremely excited to get a tattoo, which could lead us to surprise at the beginning, until we see at the four panel that is actually a “Loss” reference or a typical four-panel joke. The idea to show this at the four square and in a tattoo made many people laugh over the internet and made this meme one of the most popular. Do you want to lose weight easily? Here’s a funny “loss” trick shared on Cheezburger where you can easily identify the reference of CADbortion, especially with the “I II II I _” symbols. These symbols are frequently used to create many memes related to the original Loss comic strip, even in topics that have nothing to do with cartoons.

When the Sun Hits That Loss Meme Here it’s quite recognizable how the Loss meme has its particular reference with Pacha hands, being just another example of “I II II I _”. “When The Sun Hits That Ridge Just Right” is the base of this meme, making it particularly funny among users who saw this ranked on Cheezburger.com

When America is just another Loss Meme 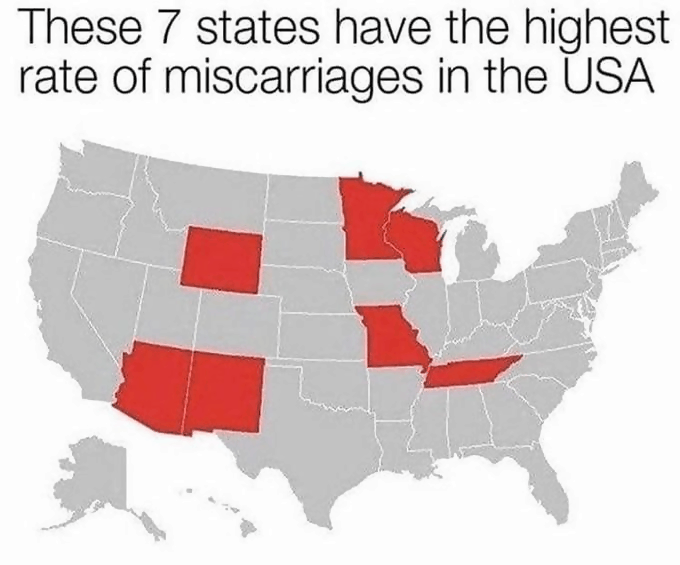 Even the map of America was used to entertain many internet users with an adaptation of Loss Meme. In this case we see a title related to the rate of miscarriages in the USA, but just marking the states of Wyoming, Minnesota, Wisconsin , Arizona, New Mexico, Tennessee and Missouri, which create the notorious reference of “I II II I _” 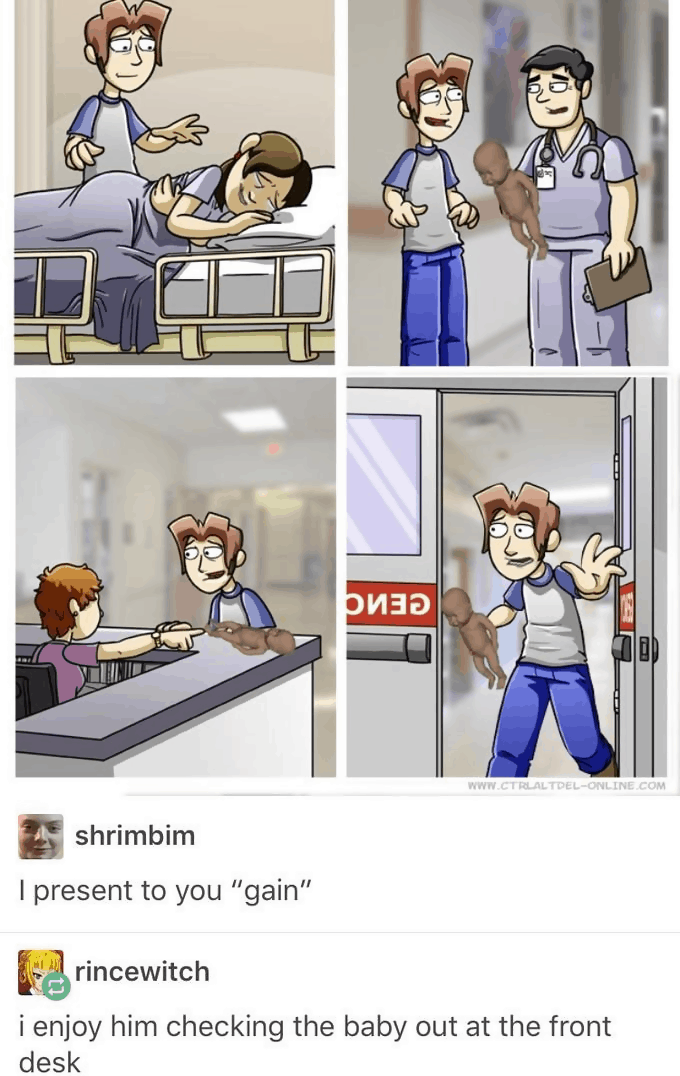 Can you imagine CADbortion but vice versa? An internet fan decided to create a meme with this idea, and it obviously gained popularity once it was shared via Cheezeburger.com. Many viewers decided to shared it on Social Media and until now it’s one of the favourites variations of Loss Meme.

Which One will fill up first with Loss? What it seems another tricky image related to “Which one will fill up first?” end up being an strong reference of Loss meme. This was also sahred on Cheezeburger and many viewers thought it was quite funny since you can use the “I II II I _” anywhere. An internet user decided to use exactly four images from the “Never Gonna Give You Up” video and create a four-panel strip with the CADbortion reference. This has another strong topic, which is the popular Rick Astley meme or “Rickroll” that was a viral prank on Internet back in 2007. This is a funny picture of “things we hate”, since it says there are 5 things, but you can only see four. The five one is a “Loss” meme, which can be recognized with the “I II II I _” reference in this image if you detail closely.

what is this new "loss" meme from OutOfTheLoop

One Redditor in the thread had a full synopsis (his opinion not ours):

Like other people are explaining, it isn’t a “new” meme, however, it is one that is beginning to reach areas outside of 4chan (and /v/ in particular)

It really is all focused on a single webcomic by the name of Control+Alt+Delete. At this point, he’s able to create a manuscript novel based on the weird history of this comic and its author (Tim Buckley), but he’ll attempt to provide you with the short and simple summary of it all.

Essentially from the very beginning, it was belittled for being simply a low-quality imitation of Penny Arcade. Tim Buckley cited Penny Arcade as a massive influence as a way to describe away the similarities, although not lots of people believed it.

So to be able to distance himself from it, Buckely chooses to go all-in on dialog and attempts to add in actual story and continuity. Many people truly got aboard with it, while some were a little more suspicious, mentioning that it frequently grew to become way too dialog heavy and humorless to be able to push a story.

The drawing itself also became a center point of complaint, as everybody felt it was too static, demonstrated no action or motion, and appeared like everything from character concepts to facial expressions were all just copied/pasted between frames (which is often where you’ll see the “BU” meme mentioned, as it’s an emoticon representation of Buckley’s default “dialog” face).

During this period, there was clearly quite a few events around Buckley himself that actually shaped the public’s understanding of him and his comic. Especially are lots of meltdowns and tantrums on the Ctrl+Alt+Del forums whenever anybody became excessively critical of his comic work, as well as accusations of him sending inappropriate pics to women on the discussion boards.

Now this is where “Loss” comes into play. Right at that moment, Buckley was making use of his own life as a grounds for many of the comic strips, including coping with spouse’s miscarriage, which manifested itself into the infamous “Loss” comic.

Along with Buckley’s expanding notoriety as a whiner who can not deal with critique and his reputation for tawdry forum messages, the world wide web (namely 4chan’s /v/ board) saw fit to accomplish what it does best and crucify someone when they are down.

Random edits of his comic began developing and managed to stay within /v/’s identity for 8 years, enough where it’s developed into super abstract depictions of the comic (such as this meta-humor masterpiece from a random /v/ thread about the comic strip): 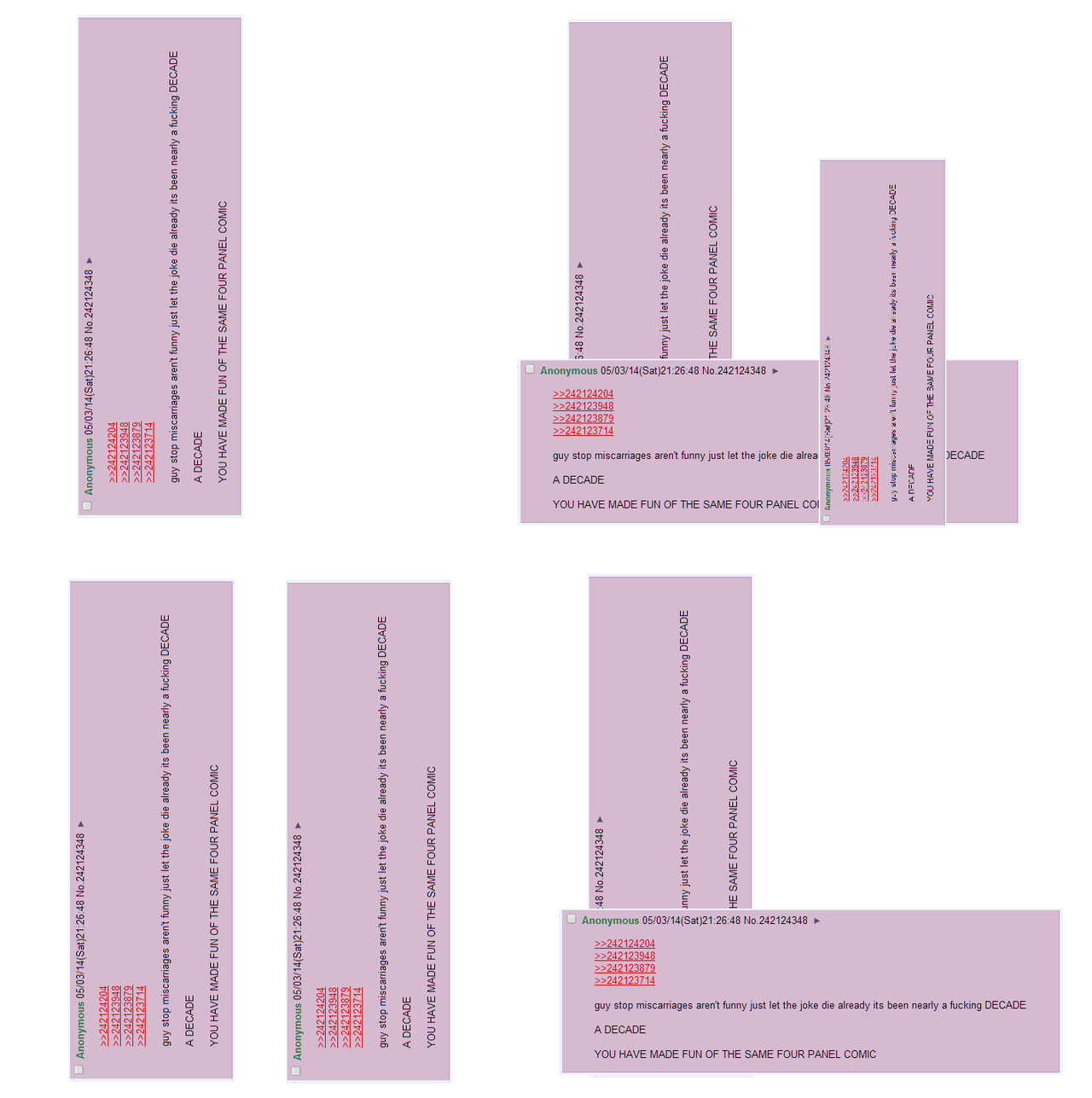 What is the i ii ii i _ meme? from OutOfTheLoop

All in all, a pretty weird evolution of events to create this bizarre, amusing and ultimately poignant (?) meme.