The United Airlines Meme started when airline staff asked the passengers on a crowded flight to give up their seats in exchange for compensation. They went on to offer as much as $1,000 per seat, however, they couldn’t get the people to leave. Infuriated by the response, they randomly chose 4-passengers and asked them to leave their seats. Upon refusal, they dragged 69-year old David Dao off the plane with the help of security. The scene was chaotic and was recorded by his fellow passengers. Immediately afterward, the internet dragged United Airlines through the meme court (Source).

1. Rocky Balboa – Yo Adrian, I made it to the plane This meme involving Rocky Balboa was posted by an Imgur user – @johnnny5. It’s hilarious and sad at the same time. Poor Dr. Dao after his rough handling by the security guard looked as if he fought a few rounds with him, who apparently looked like Mr. T. 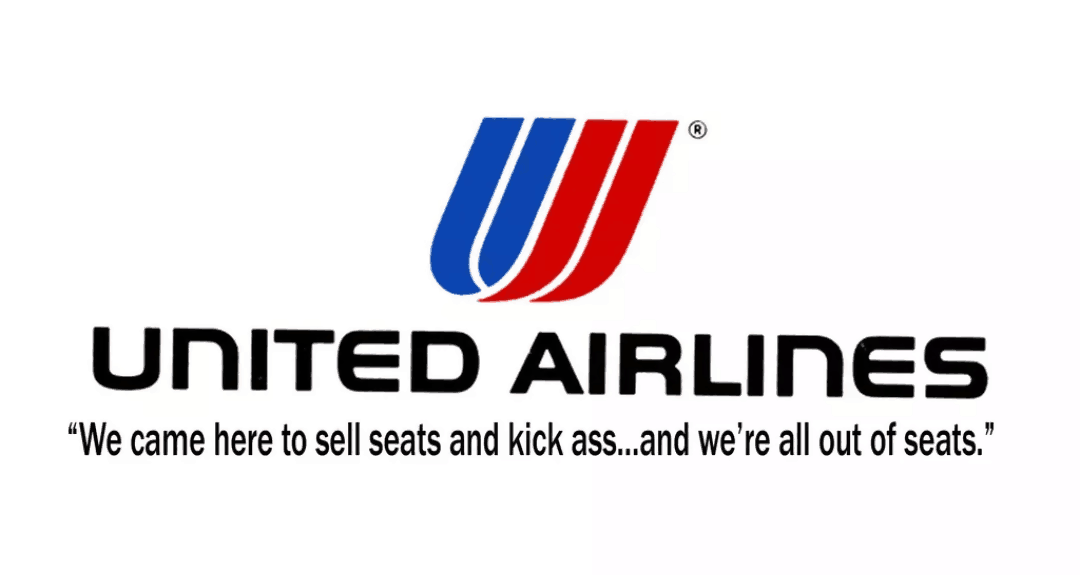 One savage user on Reddit @mayorpaco decided to give United Airlines a new tagline which suggested “We came here to sell seats and kick ass… and we’re all out of seats.” Yet, again, a Reddit brand makeover which has a nice ring to it.

Ridiculous yet hilarious meme featuring a flight attendant being brutally honest with a passenger. Lol. “Coffee, tea, or a savage beating?” They even have testimony from Dr. Dao. You want it. United Airlines will ensure you get it. This meme featured on gomerblog.com.

4. 4 out of 5 Doctors recommend United Airlines 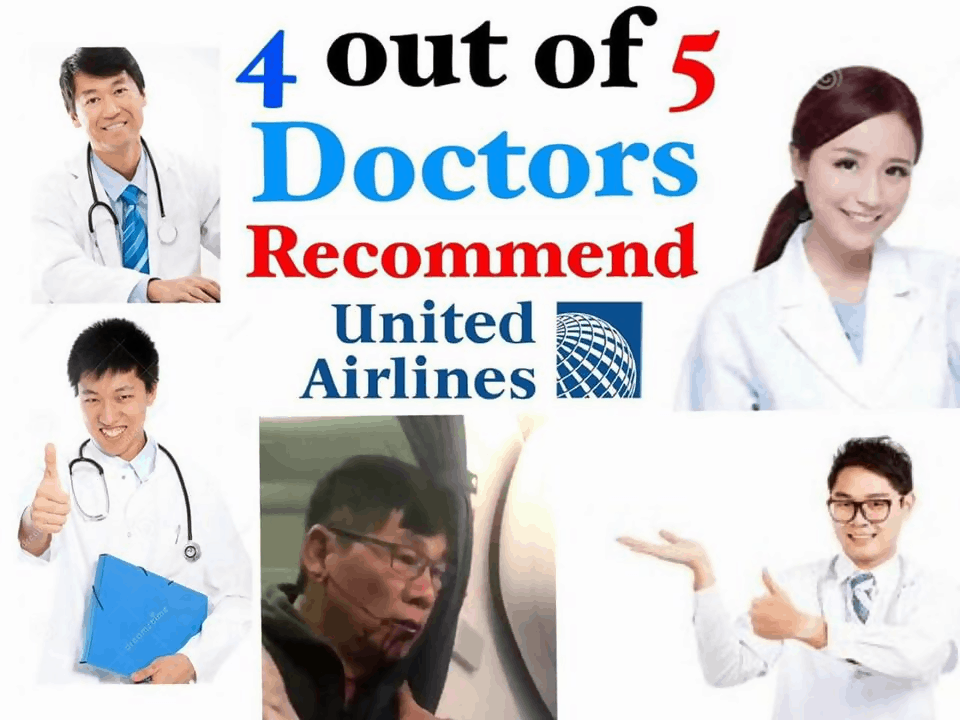 Yet another feature from gomerblog, has the trademark medical claim parody. This meme has 5 doctors, but only 4 of them recommend United Airlines and one doesn’t. Want to know why? Try refusing to give up your seat at United Airlines against a $1000 compensation. A Reddit user @AkshayArsenal took Dana White’s spot and fixed this main event bout between United Airlines and Random Asian Guy. The banner is brutally honest though “Tickets on Sale Now But Seat Not Guaranteed.” Be There, April 9, Sunday. 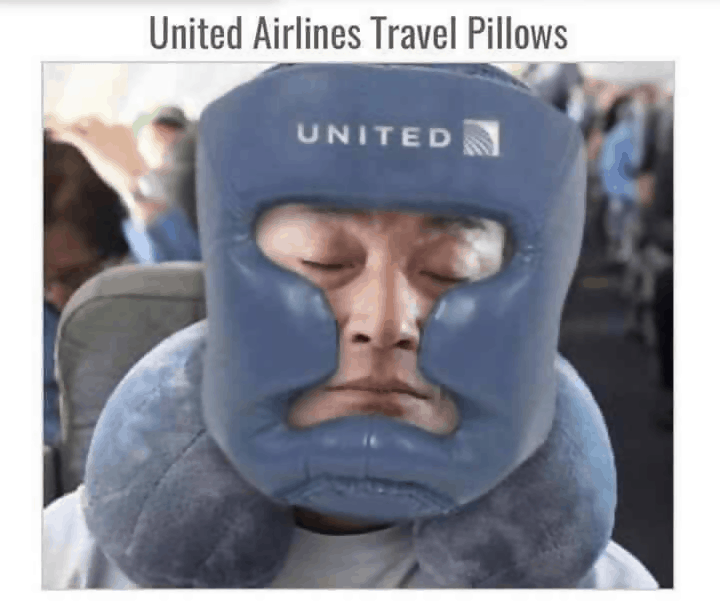 Experience luxury and convenience of the highest order with United Airlines. They provide you with faceguard along with travel pillows. Just in case, their security team tries to storm in and brutally punch you to get you out of your seat. (Yes, they don’t care if you bought the tickets)! They just care about sparring convenience. (Via: Gomerblog) 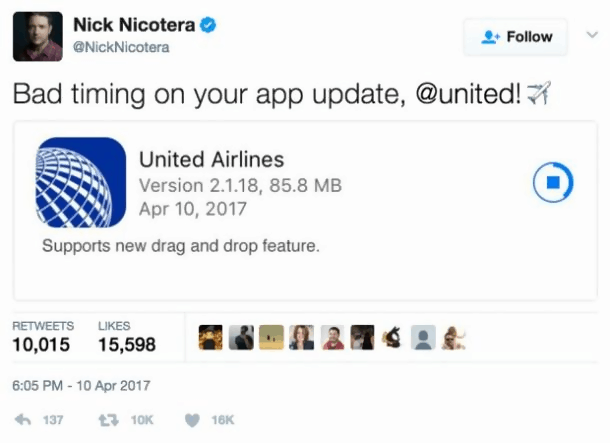 Hahaha. A tweet from @NickNicotera shows the bad timing for the United Airlines update. Lol. the added feature rightfully suggests, “Supports new drag and drop feature”. Now isn’t that a true upgrade based on real-life testing from the greatest airline in the world? (Via: Gomerblog) 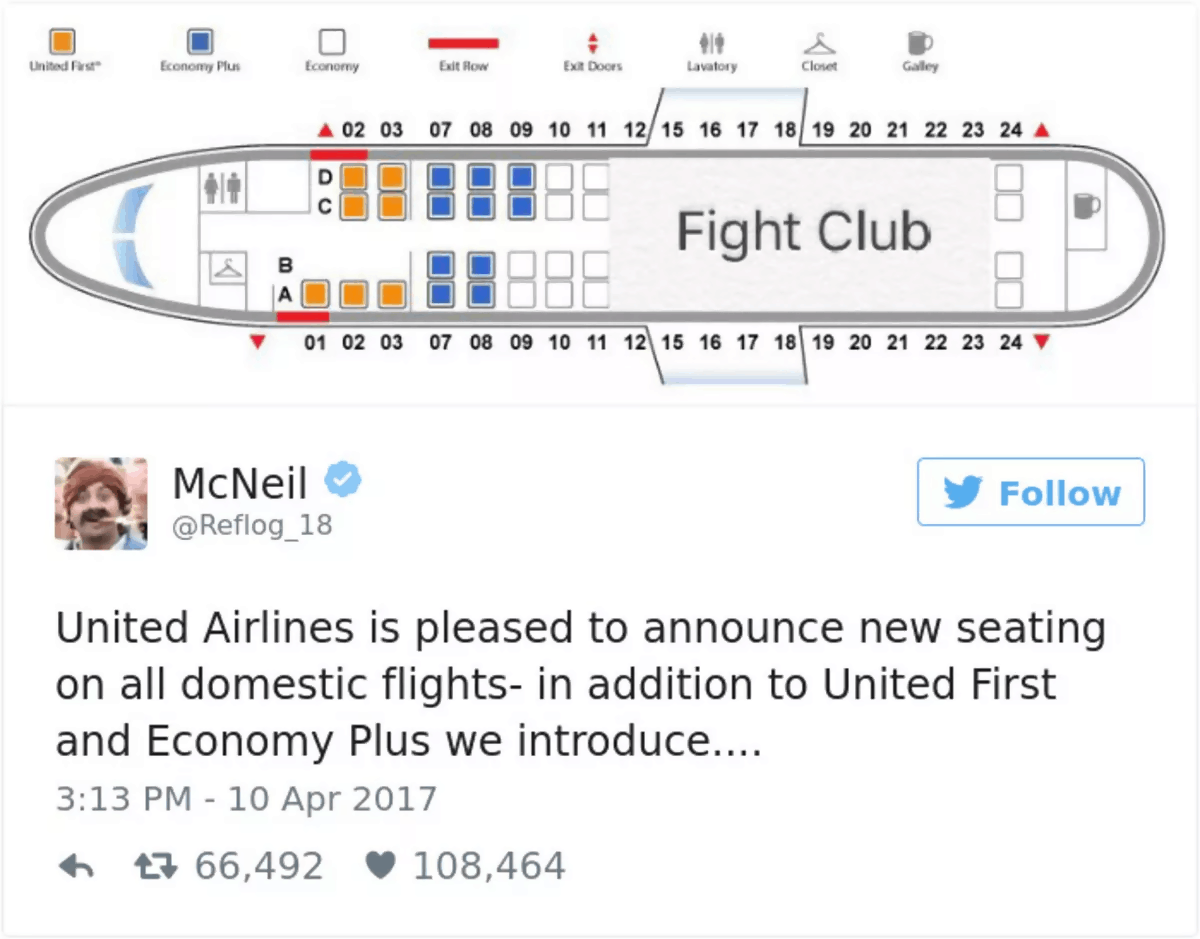 A tweet from @Reflog_18, shows the revolutionary addition by United Airlines. They now offer First Class, Economy Class along with a Fight Club. Your domestic flights experience will never be the same again. Doubt it? Ask Dr. Dao. The Premium Fight Club Member. 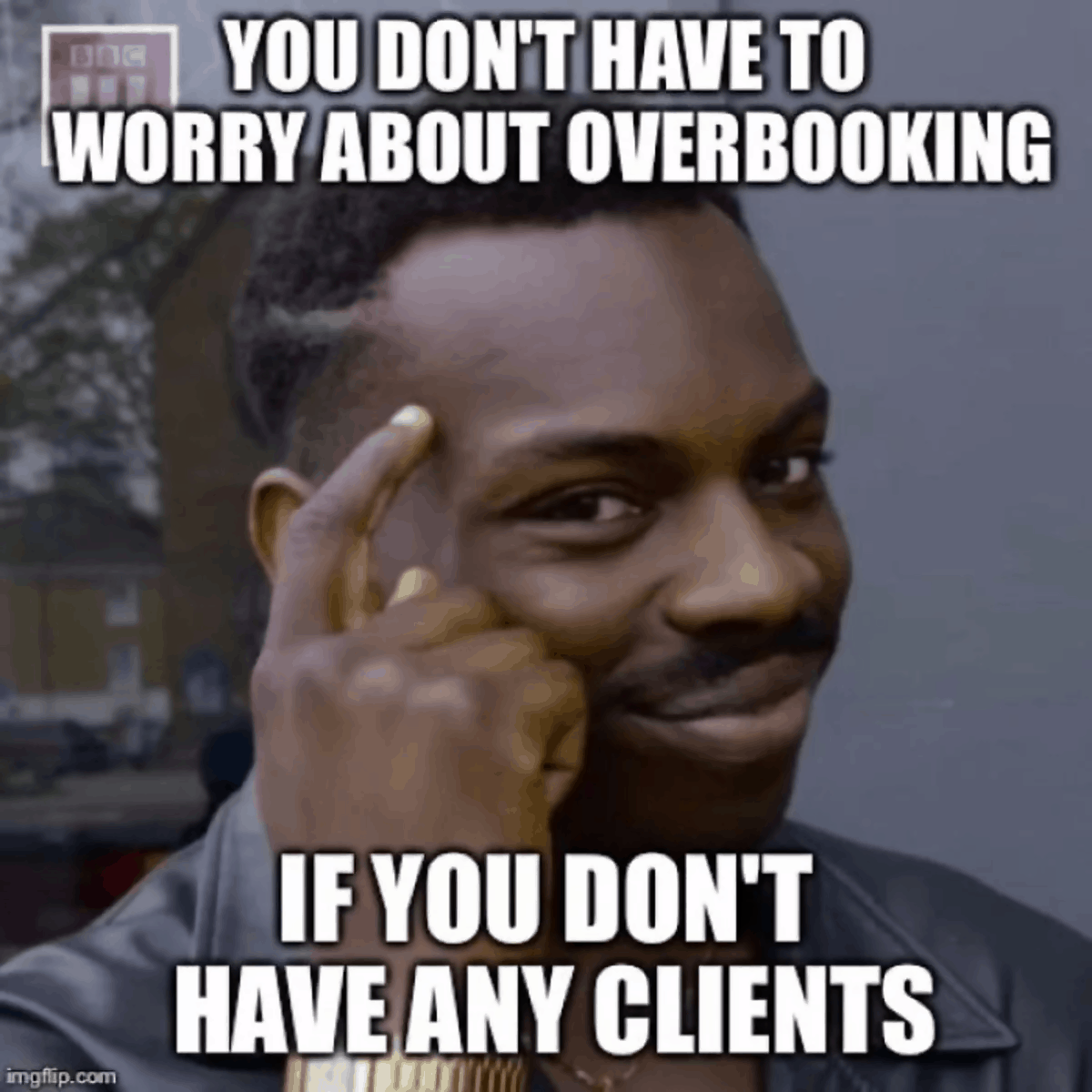 So, the problem with being the best airline is the overbooking? Here’s how you can prevent that according to BlazePress. You can use the brilliant technique deployed by leaders in Hospitality and Customer Support – United Airlines. On a serious note, as soon as the video went viral, United’s stock fell down faster than tinder DM’s standards. 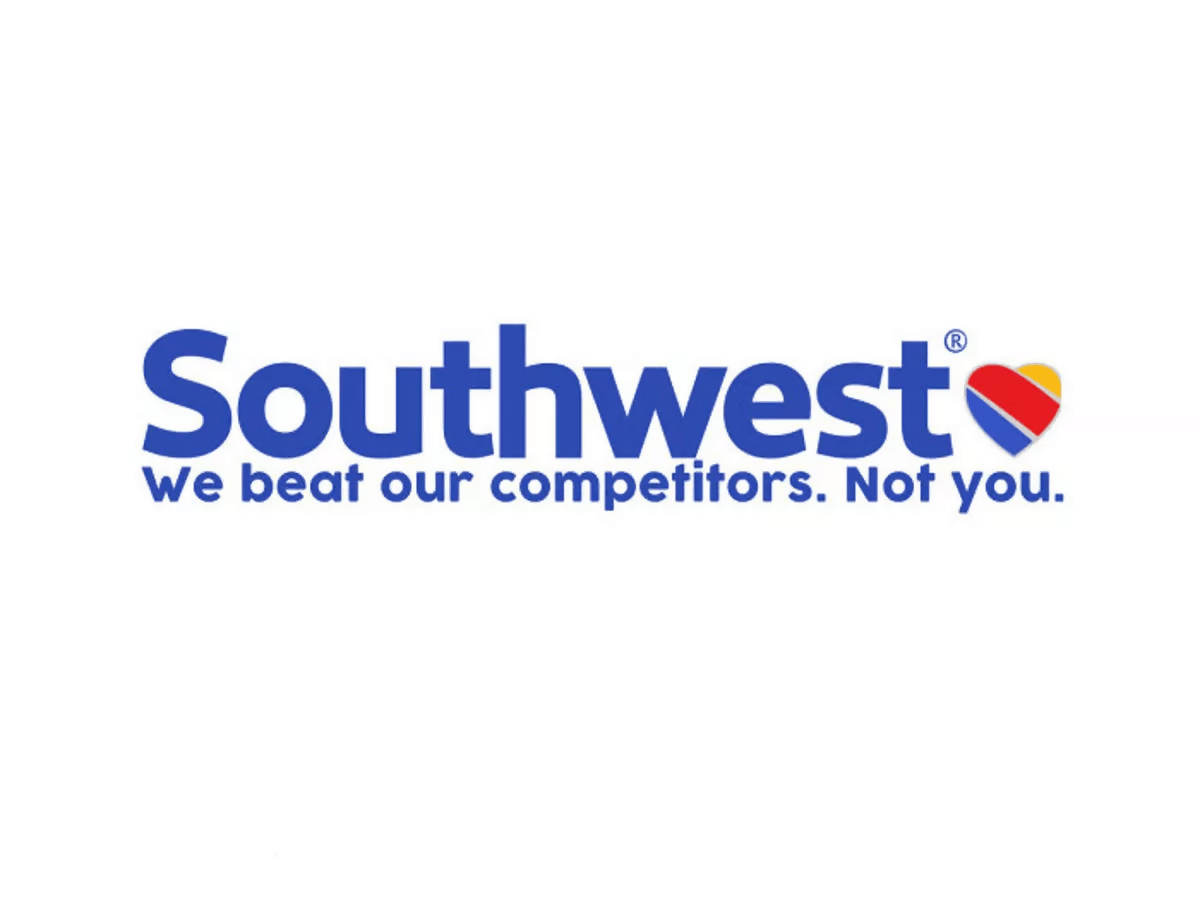 Capitalizing on an outstanding fuck-up. Southwest Airlines ran a campaign which says ‘’We beat our competitors. Not you”. Well Southwest, you don’t have any say against the power of self-destruction. For marketing expertise, get a free consultation from United Airlines. (via: @Seasisle/Twitter) 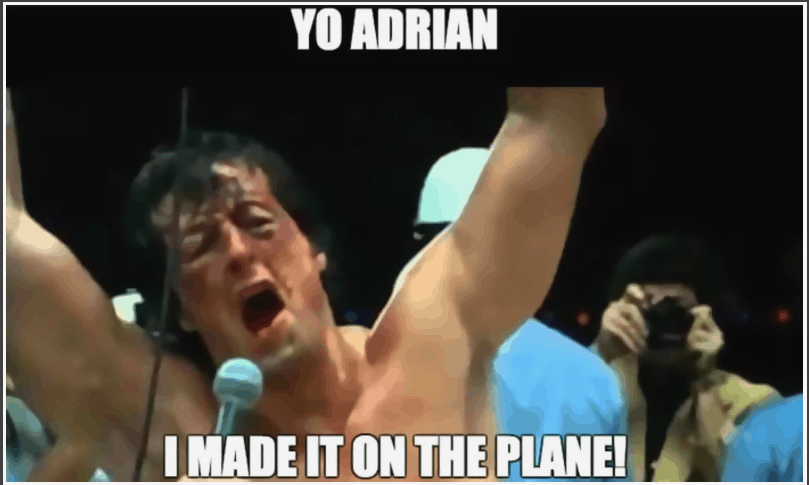 Yet another Imgflip.com entry – Lord Vader like United Airlines’ Security Team got no chill. Vader says, “We are altering our seating arrangements.” You oblige. Understood? A Reddit @9DAN2 posted this hilarious image featured Bubba Ray Dudley and his brother Devon Dudley doing their finishing move. Save it. Savor it. Ironically, that’s exactly how United Airlines’ staff trains to re-accommodate a passenger. 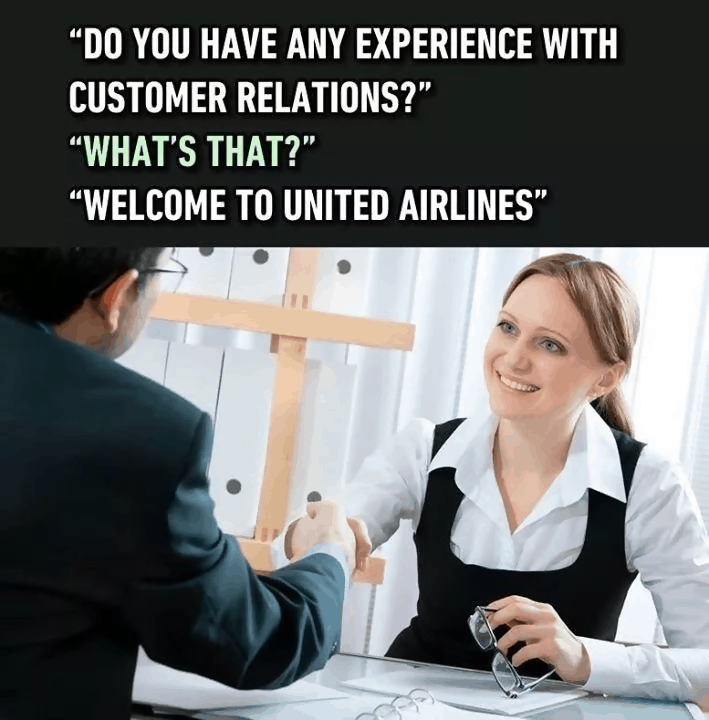 This post by reddit user @ramibhs shows how the times are changing. “Customers are always wrong” philosophy in full swing. And in case, if you want to experience that, welcome to United Airlines. Just try it! I assure you, you’d have a pleasant experience just like Mr. Dao. 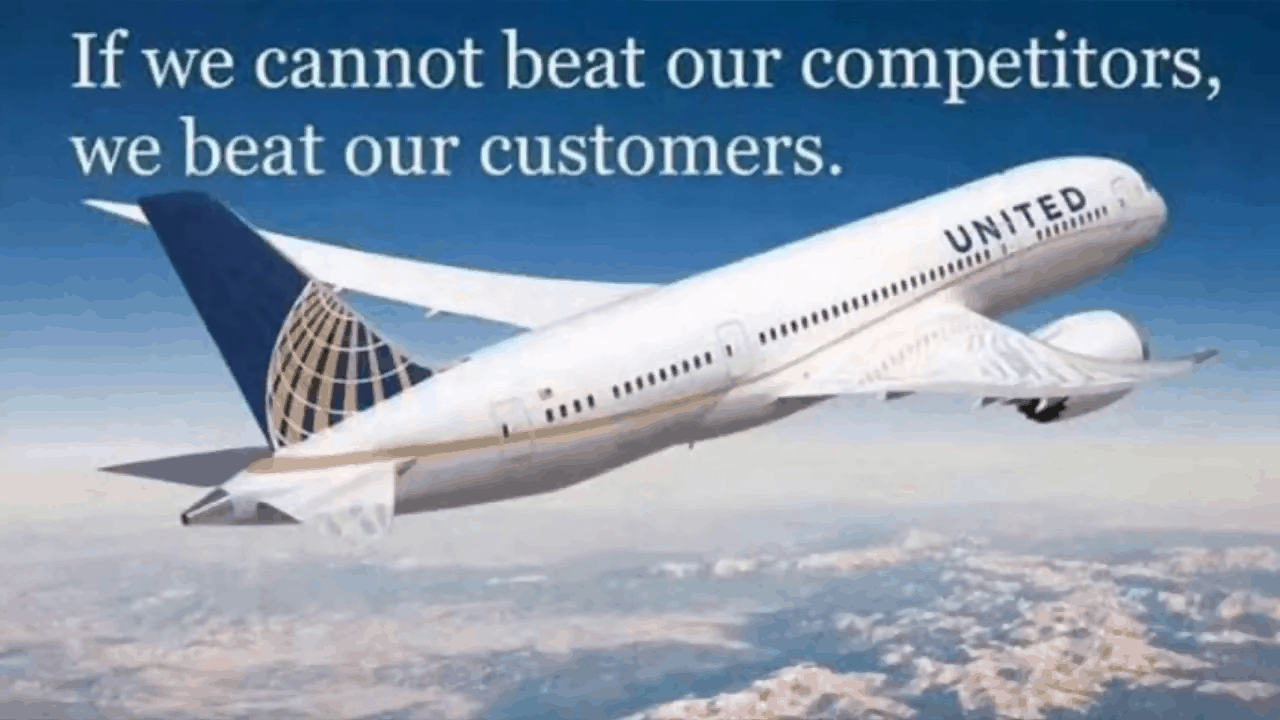 A savage meme posted by Reddit user @MrOhMyGodMario shows United Airlines’ contingency plan. So what if you can’t beat your competitors? You can always beat your customers. That’s a great way to lower the frustration. Ain’t it? 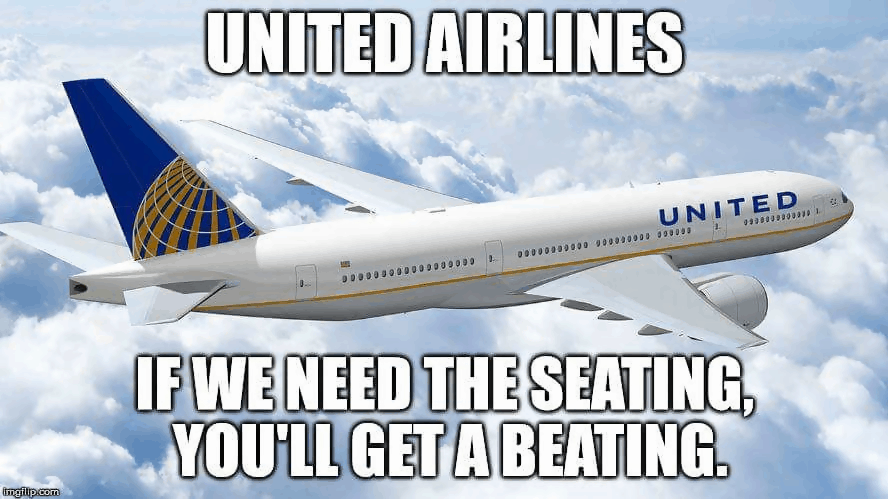 Yet another entry from imgflp.com featuring a sentence good enough for a nursery rhyme. But it does make the intentions clear. If we need the seating, you’ll get a beating. Understood? So, Book and decide your seating or beating? Contact United Airlines to learn more. 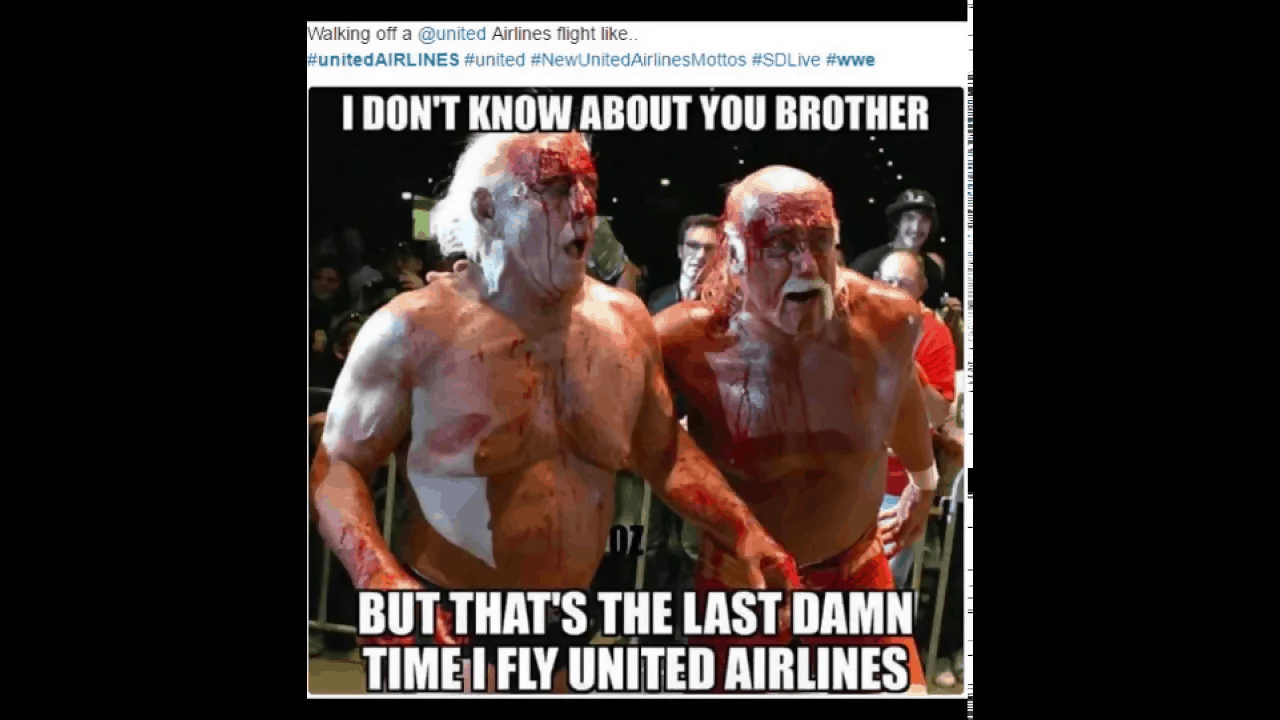 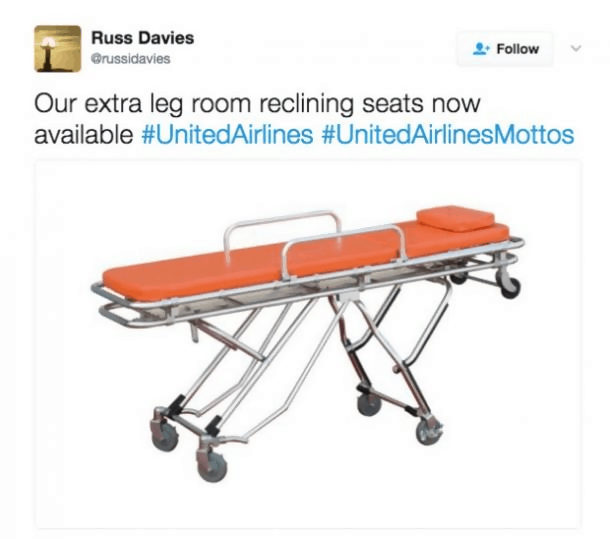 A Twitterati @russdavies unveiled the extra room reclining seats by United Airlines which they started in the year 2017. Only one lucky passenger by the name of Mr. Dao has experienced a marvelous experience. Be the next one. All you have to do is refuse to give up your seat just as you’re about to fly. United CEO doubles down in email to employees, says passenger was ‘disruptive and belligerent’ from news

Reddit reaction at the time was pretty severe, as well. In one thread react to the incident, someone commented that they had made a mistake of accepting a similar offer to leave their seed.

They ended up offering $300 and getting rebooked on a subsequent flight into LAX. The traveler was in a bit of a rush, accepted the offer and was reimbursed six $50 coupons. However, he came to find out that you can only use the coupons one at a time and that they expire in a year. That meant that since he doesn’t fly six times a year on United Airlines, it was a pretty bad deal.

We love saying hello to new places. 🇮🇹 Today we touched down in Naples, Italy with the only nonstop service from the U.S.

Another user chimed in, saying that according to Department of Transportation guidelines, that if you end up at your destination 2 or more hours late that they will pay you four times the price of your ticket.

However, another user said that the original poster had offered to give up the seed. They only are forced to give four times ticket price if you are forced to sacrifice your seat.

The original video caused a lot of shock. Redditors were quick to post different angles of the incident and were flabbergasted that the individual was knocked unconscious and he was bleeding from his mouth.

Another Redditor had a bad experience with overbooking, saying that in their experience they had a fully booked flight, but everyone had seat assignments.

Then they walked two pilots and two flight attendants up and abruptly it’s overbooked. Next, they begin booting people off the flight.

They had a Christmas Eve flight to Florida to join the family for the holidays. They declared the next flight was in 2 days, missing Christmas, and landing on the 26th. They suggested $200 vouchers. Nobody took them.

They went right to kick people off the flight after that. I think they picked 2 couples who just had to stay behind and miss Christmas. It was crazy.

Another Redditor explained that when his son was just of sufficient age to travel alone. United was running a couple of minutes behind schedule. So instead of holding the connection for five minutes like SouthWest had in the past, they had it leave.

They then told his son he was by himself and to go locate a random help desk, and lied to his mother and him about what happened and where he was. They told lies, the Redditor said, and claimed the child altered his ticket mid flight because that is something a young child is capable of doing, the Redditor said sarcastically.

The good news was United Airlines does this so frequently they have an area where youngsters may rest overnight at the airport terminal. It had wireless so his child was satisfied.