Crash Bandicoot is a popular video game from the late 1990’s that has recently resurfaced in social media as a meme. The hero of the game is Crash, a manly-looking marsupial, who has to jump through obstacles to save his girlfriend.

There have been some random memes featuring Crash floating around in the past few years, but the hysteria really started after Youtube game streamer OneyNG released a video of himself playing Crash Bandicoot and repeatedly saying whoa whenever Crash jumped. This is the perfect example of the Crash Bandicoot meme based on OneyNG’s video. Crash, in low-def animated style, is surrounded by the word whoa! Over his head, you can see the original Crash Bandicoot logo from the 90’s. This obscure meme is a reference to the Nickelodeon show Jimmy Nuetron. Sheen, the main character’s best friend, looks a lot like Crash Bandicoot without his furry suit on. The worse the drawing, the better the meme. This one is also based off OneyNG’s video.

4. The resolution evolution of Crash Bandicoot This meme from Reddit shows crash in low to high definition. In the clearest definition, 4K, he’s a real-life bandicoot. 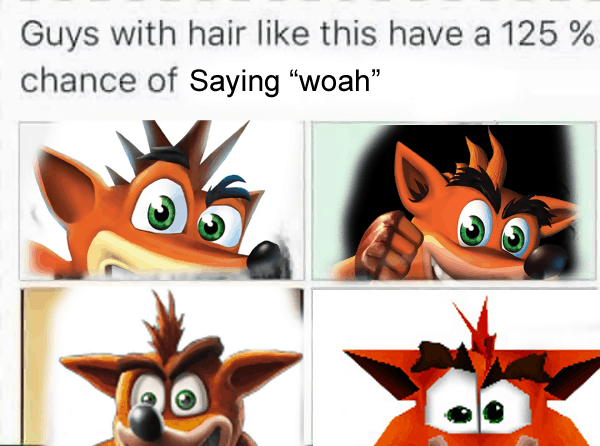 6. Crash through the years This meme from a Reddit user shows Crash’s animation evolving with different editions of the game – in 2015, he becomes John Cena.

7. He’s got gorgeous eyes and a stunning smile 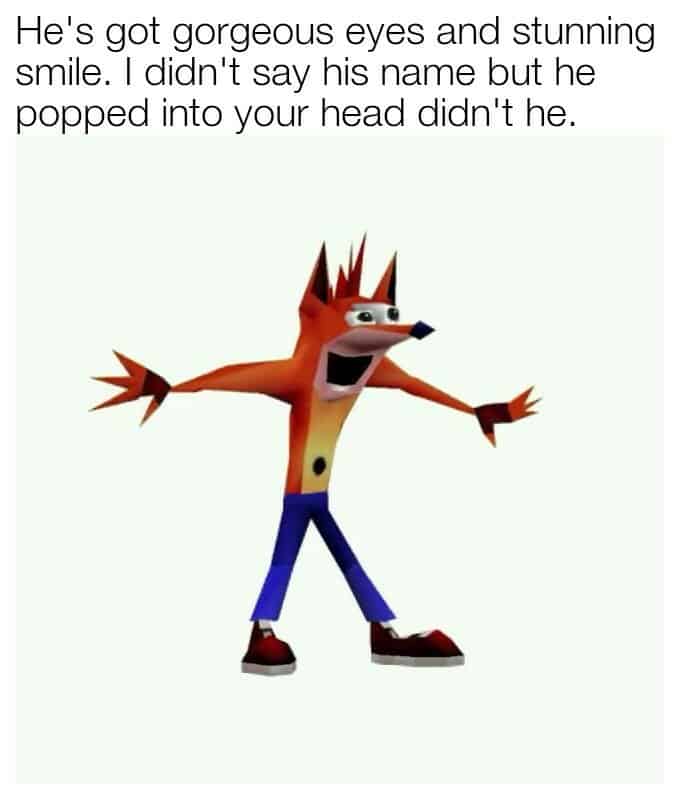 This image is based on a meme that was circulating around Instagram back in 2014. Instead of a picture of Harry Styles, a Reddit user pasted in a low-def Crash Bandicoot. This Reddit meme is another classic example of the Crash Bandicoot whoah meme – it shows a badly animated Crash in front of the word whoah printed over and over.

9. Crash in the Drake meme format The original meme – super popular on Instagram around 2017 – showed Drake with a positive and negative version of the same thing. This one uses Crash Bandicoot to make fun of the Drake format. 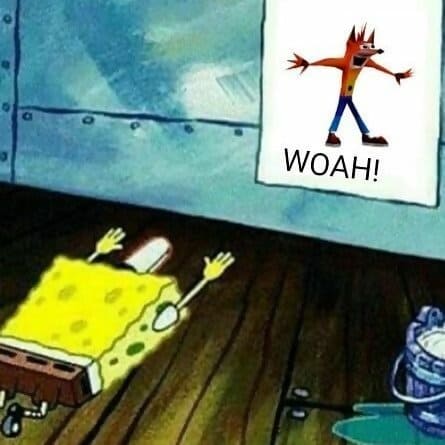 This image from Reddit shows Spongebob Squarepants bowing down to the Crash Bandicoot whoah meme.

11. Crash breaking down the meaning of whoa This image from an Instgram meme account shows Crash saying whoa four times – as the drawing gets worse, his explanation of whoa gets more complicated.

12. Admit it, you thought he was ten years old too This meme that cycled around Facebook and Instagram shows Crash Bandicoot with the caption, “admit it, you thought he was 10 years old too!” The meaning is that kids playing the game tend to see Crash as a kid their own age.

13. Runs into one penguin, dies instantly

This meme from Reddit shows the contradicting logic of the game – how come Crash can handle severe cold, but dies just from touching a penguin? 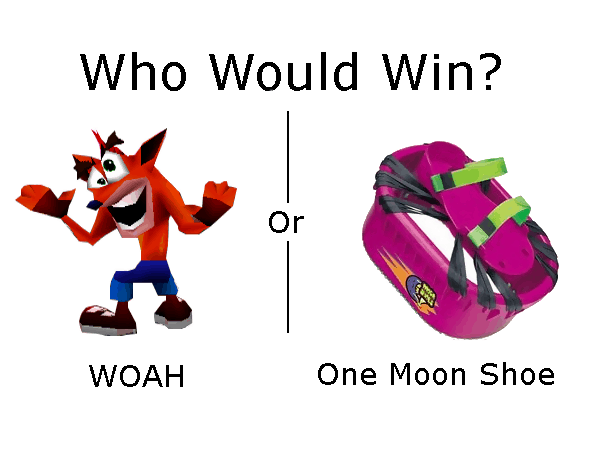 This Reddit meme is a dose of 90’s nostalgia. Who could jump higher, Crash Bandicoot, or a kid in moonshoes? This meme from Reddit is based on OneyNG’s video – it shows a strangely drawn Crash Bandicoot on the Super Mario ’64 game cover.

16. Whoah, the ghost of Crash Bandicoot! One Reddit user took surreal to a whole new level with this strange meme of Crash Bandicoot saying whoah to his own ghost.

17. Powder that makes you say whoah This silly image from Reddit shows Crash drinking out of a box labeled powder that makes you say whoah. The point is clear – OneyNG said whoah way too many times in that video.

This meme circulating around Instagram is meant for people who have played the game before. If you know how Crash spins, you understand why it’s like that one wheel on the shopping cart.

19. Whoah! With a green background Again, the whole point of the Crash Bandicoot meme is to show Crash saying whoah in the most surreal way possible. This Reddit meme pretty much covers it. This meme shows Crash saying whoah with his arch-nemesis, Dr. Neo Cortex, in the background. This meme from Instagram follows a popular format for making fun of animated characters. It shows the low-def Crash Bandicoot from Nintendo 64 – he is pretty scary. 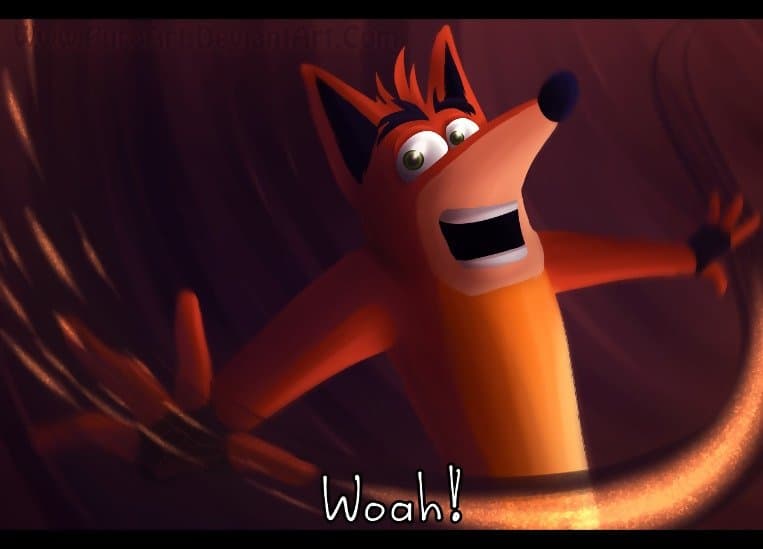 This image was hand-drawn by an artist on Tumblr. It makes the whoah meme a little more tasteful. This image that briefly circulated around Reddit shows Crash Bandicoot as a thoughtful 1920’s poet, with the caption sad whoah. This Instagram meme shows Crash in the newest edition of the game. In the first panel he’s celebrating New Year’s Eve, and in the second panel he’s collapsed with a hangover. This meme shows Crash’s “true” self – a real bandicoot in his shorts and sneakers, saying his famous phrase from the original game: Yikes! Let’s try that one again!

25. Crash Bandicoot harder than anyone remembered This meme from UNILAD Gaming was made after the newest re-release of the game. Fans were upset to learn that Crash Bandicoot is a lot harder to play than they remembered from their childhoods.

What are these crash bandicoot memes? from OutOfTheLoop

Over on the subreddit out of the loop, one person was confused about all of these different Crash Bandicoot memes. He said that he keeps seeing the video game character whining and cycling from happiness to sadness to happiness and then whirling off the screen and didn’t know what it’s all about.

One person said that it originated from the YouTube Haiku subreddit. It’s latest Fascination a has to do with the Crash Bandicoot character and apparently has been running to the ground. Apparently, there was some gameplay footage that was funny and then kind of went viral after it was promoted on social media.

They also provided a link showing how this streamer figured out how to do some rudimentary Crash animations:

Others were quick to praise the OneyNG Streamer, saying that he’s one of the best around and that he’s frequently performing on YouTube where he plays with his friends. Others recommended Egoraptor, who is doing really well for himself with Game Grumps.

Another Redditor said that even before streamers popularized this weird meme, he himself thought it was an amusing noise and has been using it with his friends for a while. He explained that a lot of Crash video game meme material has surged since the Crash Bandicoot N. Sane Trilogy was released, which was a remastered version of the 3 original Crash games.

Why These Whoa Videos?

What’s with the Crash Bandicoot "whoa!" videos? from OutOfTheLoop

In yet another Reddit post, a Redditor provided some examples of the Crash Bandicoot woah videos, wondering about their origin and looking for some explanation from other Redditors. One person said that there is a video game streamer named Oney Who likes to say whoa whenever he’s playing the video game. It happens so often that it’s become a running joke.

Back in 2017, the dailydot.com covered the resurging Crash Bandicoot, saying that it was experiencing a Renaissance, particularly after Several classic games were released in high definition. While Sonic the Hedgehog, they said, is a more popular meme online, crash has taken some of the spotlight from the purple Hedgehog. They published a pretty detailed piece of different varieties, including:

What Is Love Version

Crash Bandicoot became the mid-90s face of a video game franchise created by Andy Gavin and Jason Rubin While they were working for Naughty Dog for Universal Interactive Studios and Sony Computer Entertainment.

The series was first restricted to the PlayStation family of video game consoles. The series has arrived on various gaming platforms and gone through several developers and spans many genres.

The games are frequently set on the fictitious Wumpa Islands, an archipelago located to the south of Australia where people and mutant animals co-exist, although other places are common. The main games in the series are principally platformers, but many are spin-offs in different genres.

The hero of the series is a mutant enhanced bandicoot named Crash, whose quiet life on the Wumpa Islands is often obstructed by the games’ main antagonist, Doctor Neo Cortex, who produced Crash and wants him dead as he is a failed experiment. In most games, Crash must beat Cortex and thwart his plans for world control, but there have been cases when they have operated together.

These have been 25 of the top Crash Bandicoot memes, from the artistic to the surreal to the just plain weird. The popularity of the meme is slowing down, but you can still find Crash all over social media.