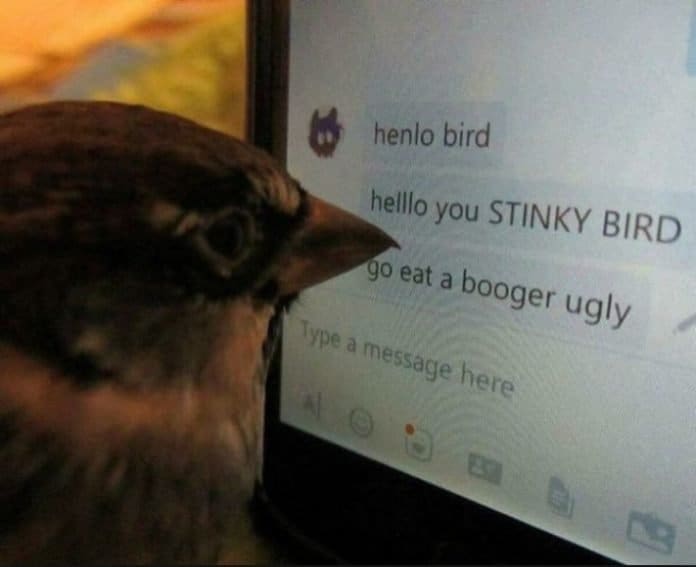 The word ‘’Henlo’’ is the translation of how pets or animals would say ‘’hello’’ in English, given that they would not be able to speak in perfect English. In this meme, it is also used in a comedically derogatory or satirical way which implies that a pet or someone is stinky or ugly, referring to how animals can naturally be if not cleaned.

The Henlo meme features an animal that is looking closely at a computer screen and getting cyber-bullied by a random person that writes a chat-like message directed towards this animal in the following snowclone format, that changes depending on the (animal) victim and is written in doggo-like internet slang: According to KnowYourMeme and Reddit, the meme featuring the lizard was indeed the original meme. Here, the user ‘’1 rooting tooting motherfucker’’ – a meme-worthy name – writes to the lizard in a steam-chat (the most popular gaming platform) the following:

There are other formats of this meme including the word ‘’henlo’’ however, which usually depict over excited animals that are wanting something with a lot of passion like the following example:

Henlo fren, pls can has treat and also box for hooman? from rarepuppers

In this one, the r/rarepuppers subreddit showcased a German Sheperd at the Post Office looking to claim a package and a treat from the postal employees.

According to the Reddit user u/tychog99, this meme stems from the ‘’I can haz cheezburger?’’ cat meme and the ‘’bepis’’ meme. Both of these play with the idea of mispronouncing words in a specific dialect, be that animal dialect or ‘’stupid’’ dialect.

Here are some of the top posts of all time in Reddit for the henlo meme:

In this one, over in r/dankmemes, a smallish dog is getting cyberbullied- told to “go eat a bone ugly”. The author captioned it- “Just walked in on my son to see him being bullied online..”. It’s a funny spinoff of the original meme- you’ll see even more spinoffs below.

Henlo! Time to wake up! from aww

This doggo is trying to wake up his hooman without getting into trouble for it. ‘’Henlo, hooman’’!

PS1 Hagrid and Henlo on the rise! BUY BUY BUY! from MemeEconomy

Featuring Hagrid from Harry Potter. Although not too appreciated by the meme economy with only 24 upvotes, it got x3 the 7 votes it takes to become a successful meme. Potions are the essence of every wizard!

Memes about things being bullied on the RISE! BUY BUY BUY! from MemeEconomy

Featuring Earth’s Sun. Yes, it has learned to read! A more scientific joke as most of the Sun’s energy is used to turn hydrogen atoms together into Helium. Praised with 765 upvotes. A poor kitty being bullied by a random internet stranger.

This sad birb is looking down after reading the ugly message.

A twist to the original format actually being nice to a cute hedgehog.

Here we’ve got a gorgeous Golden Retriever clambering up a small fence for pets. Eating In The Next Room This is one of the classic memes- a Labrador sticking his head through what looks like a doll house entryway.

Another twist to the original meme within the r/wholesomememes community by writing a positive message to a white little bunny.

Finally, this is a doggo video showing another different use for the word ‘’Henlo’’, where a dog turns into an evil terrifying creature after getting mad.

This funny meme exists both as text and as an image. As we have seen, there are a variety of different ways that it is used. Considering how much Reddit loves animals, the meme has experienced a lot of uses on the platform. It is an unfailingly funny way, although a little bit childish, to introduce a picture of a pet into a particular subreddit community. In our expert opinion, it is not likely that this meme will go away anytime soon. Especially as the popularity of social media platforms, including Reddit, continues to thrive, there are so many pet communities and picture sharing communities on the platform that love captioning funny images of dogs, lizards (lizer), cats, parrots and all manner of pets that we expect this henlo meme to experience continued use.