In this post, we dissect the meso meme– unearthing its origin and providing over 20 examples of its hilarious use!

This is one of our favorite memes. It originates from several insanely annoying mesothelioma commercials that implore you to join a class action lawsuit or otherwise profit from your illness. If you’ve never heard of the condition before, it’s usually an asbestos-related condition.

WebMD defines it as a “cancer of the mesothelium, a protective membrane that lines most of the body’s internal organs. Three out of every four cases cf mesothelioma disease begin in the pleural mesothelium of the chest cavity.”

Below is one of the original ads:

The copypasta of the meme is below:

The over-the-top solicitation and grating obnoxiousness of it drove a lot of people mad. It fittingly spawned a ton of memes that revenged themselves on a commercial that is probably the most hated ad in the history of television.

The memes started when a Reddit user by the handle Caraeeezy shared a post on May 16, 2012 asking whether anyone else had the word “mesothelioma” stuck in their heads following the different commercials by law firms.

The post gained a mass 770 upvotes and several comments, leading to an outcry that the law firms were trying to push the case on the disease too hard.

On November 16, 2004, Kelvinist, another Redditor, jokingly stated that it would not be a surprise if aliens intercepted our television signals and all they found was that our entire economy was based on car insurance and the disease’s lawsuits.

One Of The Original Memes

In our opinion, this is one of the funniest. It comes from the cool_as_heck Twitter user, who posted it on June 25th, 2016:

When you or a loved one has been diagnosed with mesothelioma and are entitled to compensation pic.twitter.com/01YiK7hKAJ

It shows a blurred stock photo image of an old flip phone with someone who’s entitled to financial compensation rapidly dialing. The meme’s popularity surged from there. But, we’d figure we’d showcase some of the best meso memes we could find. At the bottom of the post, we include more of its origin story- so scroll away for more satisfying meso memes:

You may be entitled to compensation from dankmemes

If you or a loved one has been diagnosed with mesothelioma,you may be entitled to financial compensation from dankmemes

Are Mesothelioma memes a solid long term investment? from MemeEconomy 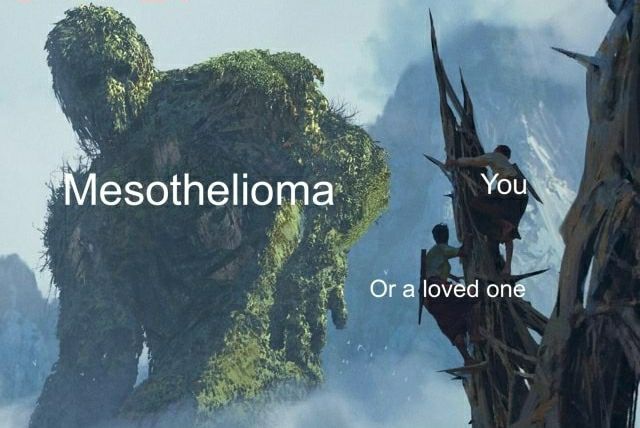 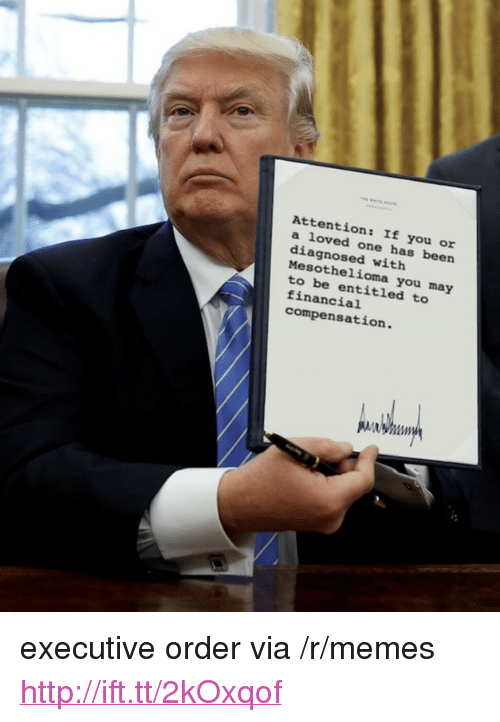 When You Find Out… 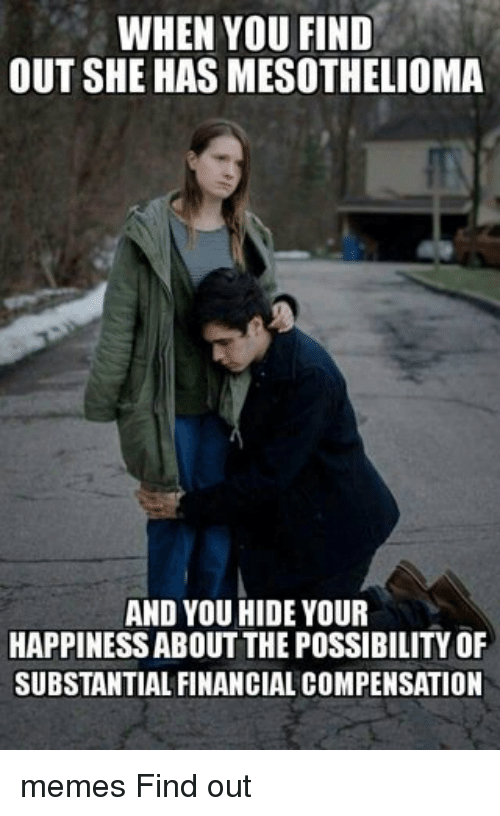 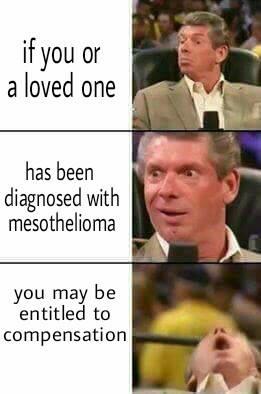 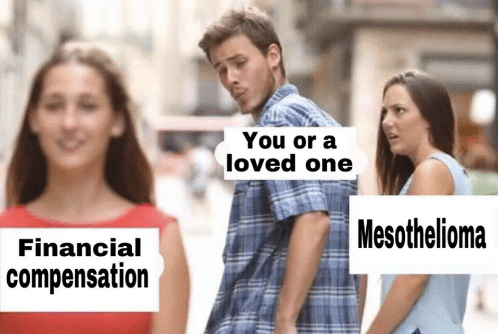 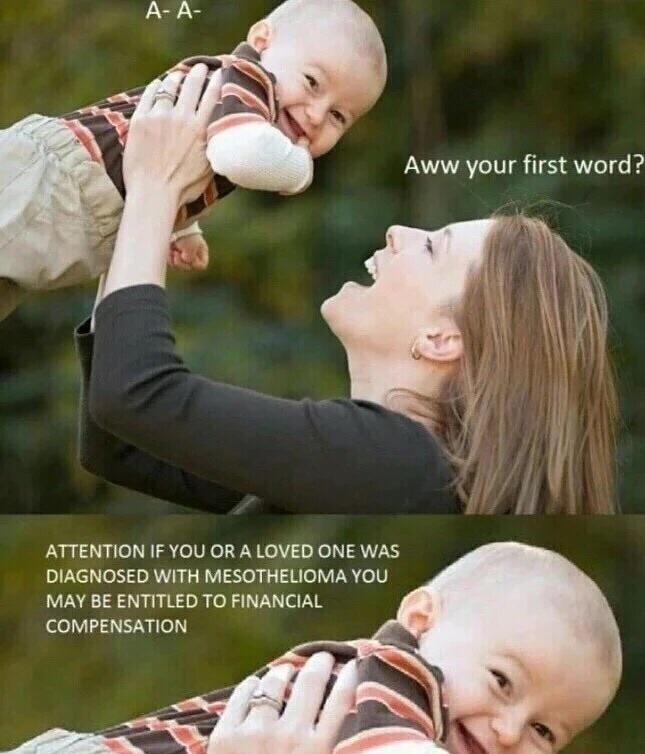 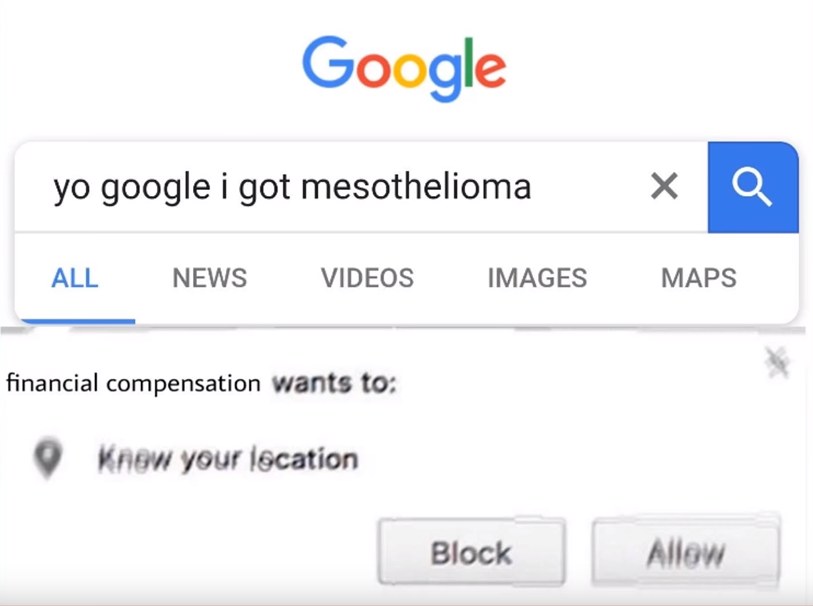 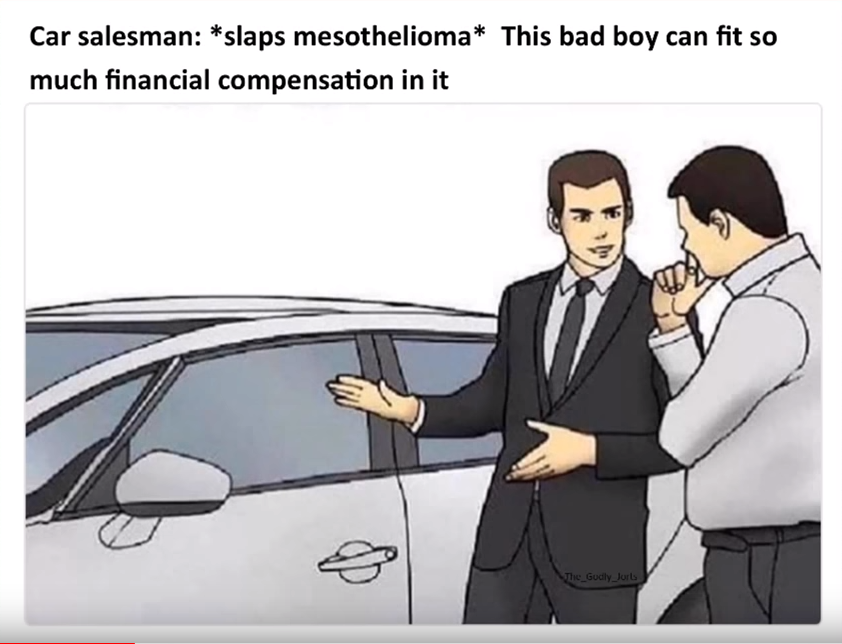 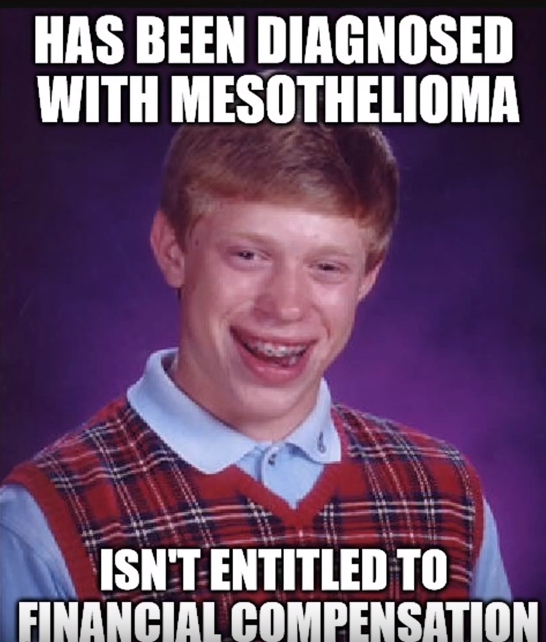 you may be entitled to financial compensation from surrealmemes 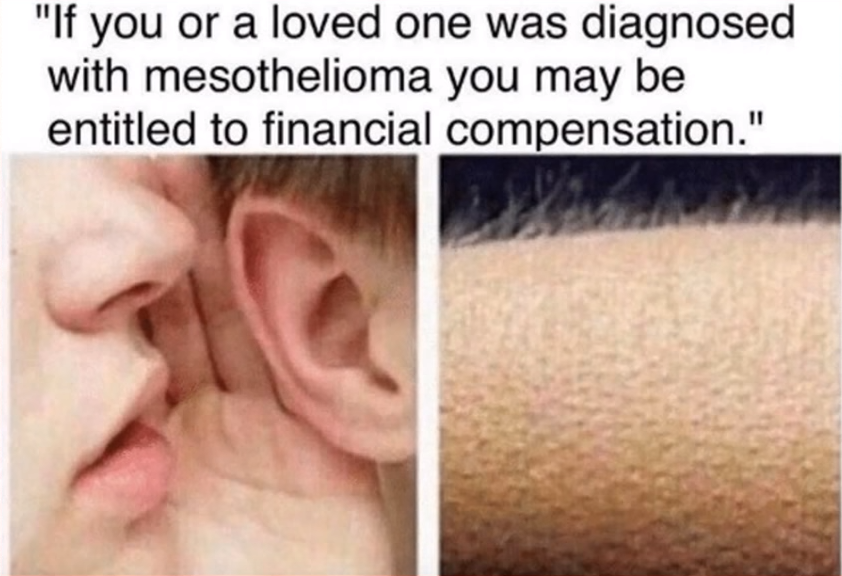 The mesothelioma memes refer to a collection of pictures that are circulating on a number of online platforms, like Twitter, Facebook, Reddit, and Pinterest among others, in relation to law firms advertising their services by informing the public that they “may be entitled to financial compensation” in the event that they are suffering or might have suffered from mesothelioma.

Mesothelioma, a disease linked to asbestos exposure, is a rare, aggressive type of cancer that forms in the abdomen, lungs, or heart.

According to a transcript from an advertisement posted on YouTube in 2008 by injury law associates from Danzinger & Dellano, who are based in Houston, Texas, exposure to asbestos in shipyards, mills, heating, construction or automotive industries may put you at risk. Unfortunately, the disease has no cure. However, when the disease strikes a person and it is detected or caught in its initial stages, treatment options and results do improve. A Twitter user by the handle @cool_as_heck posted a picture on his timeline that paraphrased the transcript from the lawsuit commercials and attached it to another photo of a person dialing a phone.

It read, “When you or a loved one has been diagnosed with mesothelioma and are entitled to a lawsuit.” Online users took the funny bit of it and started reposting the advertisement transcript with their own photos depicting individuals trying to seek compensation or contacting their lawyers for lawsuits.

On July 24, 2016, the /r/mesothaliomalwyers subreddit was created, and Soulnatsu, a Redditor, posted the advertisement transcript on /r/copypasta, a subreddit username, on August 26 of the same year.

Approximately two months later, on October 25, 2016, another Redditor by the handle LiceCurryToss posted an image of a baby smiling while being carried high by a woman, captioning the now famous transcript.

Despite its widespread on the Internet and increased popularity, there have been a number of complaints from several online users who consider the memes utterly hurtful, disrespectful, and a mockery of those who have been affected by the disease as well as their families. On the other hand, some people see it a timely, effective way of spreading awareness about the mesothelioma. In addition, they are using different online platforms to post the memes to educate others about its various aspects and informing them on how to go about it when it strikes.