If you’re someone who is into memes, there is a chance that you’ve probably come across the “No Step on Snek” meme, sometimes referred to as the “don’t tread on me meme” or the “gadsden flag meme”. You might initially think that it’s funny (and grammatically incorrect) take on “don’t step on a snake,” but in reality, this meme has an interesting backstory that will take us back several hundred years in American history.

If you studied the American Revolution while you were in school, you’ve likely learned about the “Don’t Tread on Me” flag that was used by the revolutionary American Navy. In fact, that’s where this meme gets its origins from- and from where the phrase “No Step on Snek” is derived.

In fact, the origins of this meme date all the way back to 1775. However, the inspiration for it came even earlier in the 1750s. Benjamin Franklin drew the iconic political cartoon titled “Join, or Die” with an image of a dismembered snake on it. The dismembered snake was a direct representation of the American colonies at the time.

Then, the American navy began to use a similar design on a flag in protest of the British Empire during the Revolution. The flag, which is officially known as the “Gadsden Flag,” is simply in reference to how the American revolutionaries wanted to declare their independence from the British Empire and how they did not want Britain to tread on their rights.

Best “No Step on Snek” memes

I requested the opposite In this funny representation of the meme, you can see a foot stepping on the snake, and the phrase “I specifically requested the opposite of this”, as an obvious reference of the “No Step on Snek”. This variation of the meme was initially share on KnowYourMeme.

No Step on Ekans

We all know Pokemon, and this meme has been strong enough to get popular even with this anime. This is a funny reference of No Step on Snek but instead of the famous snake from the revolutionary flag, you can see in this case an Ekans, a popular pokemon with the form of a snake.

No Step on “Snake” This meme is a funny representation of the original one with the use of the popular videogame character Snake, instead of a snake. This character is the main protagonist of Metal Gear Solid, and very popular among gamers, that’s why this meme was first shared on videogame websites.

No Step on Lego 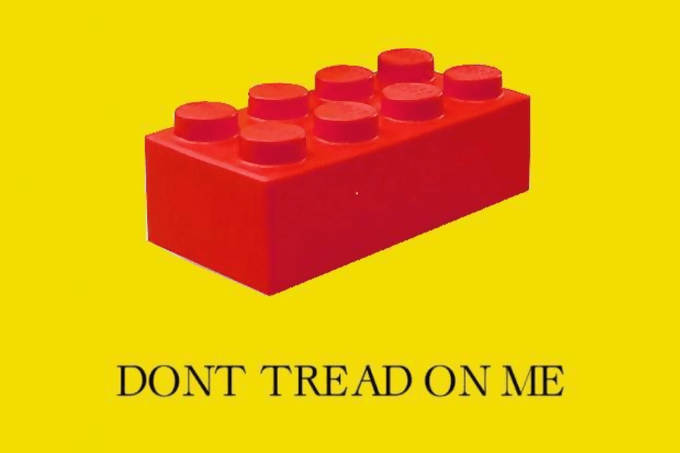 This is another parody of the original meme, shared multiple times on social media. The joke, in this case, is that instead of the already recognizable snake, you see a lego piece, which is typically associated to be painful when you step on it, and that’s why many people find it so funny. 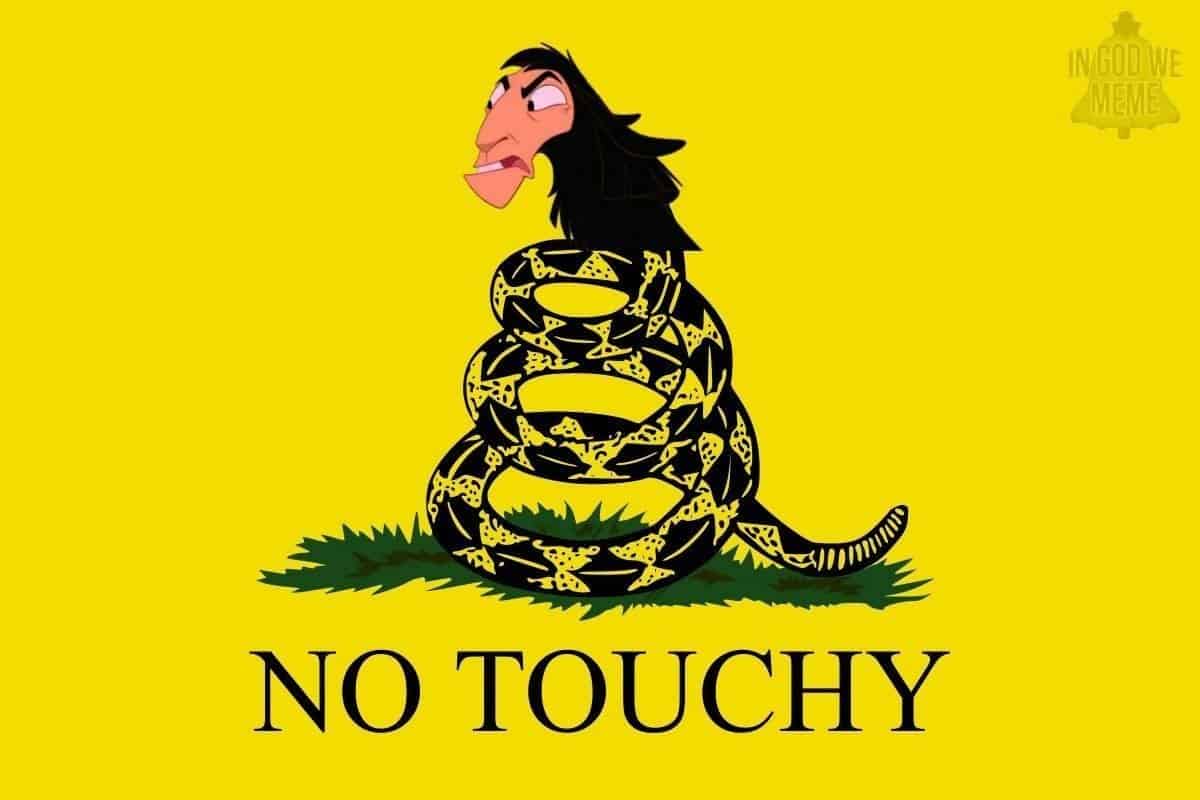 If you’re a Disney fan, you’ve probably seen “Kuzco’s Groove”, one of the funniest movies from this huge company. The memorable scene when Kuzco says to Pacha “No touchy!” while realizing he’s a llama was another good example to use it as a parody of No Step on Snek. This was initially shared on In God We Meme website.

A typical gamer knows what happens when you step on a Goomba while playing any of the well-known Mario games, so this is just a creative example of “No Step on Snek” but using a Goomba, to let you know that you have to be careful with these.

There are many memes like these over the Internet, being simple and basic, but still funny due to the references they have. In this case, you can see a plain draw of a snake but saying “mind your feet”, making a parody of No Step on Snek but with an intentional “well-behave” manner.

Be careful with the snek! 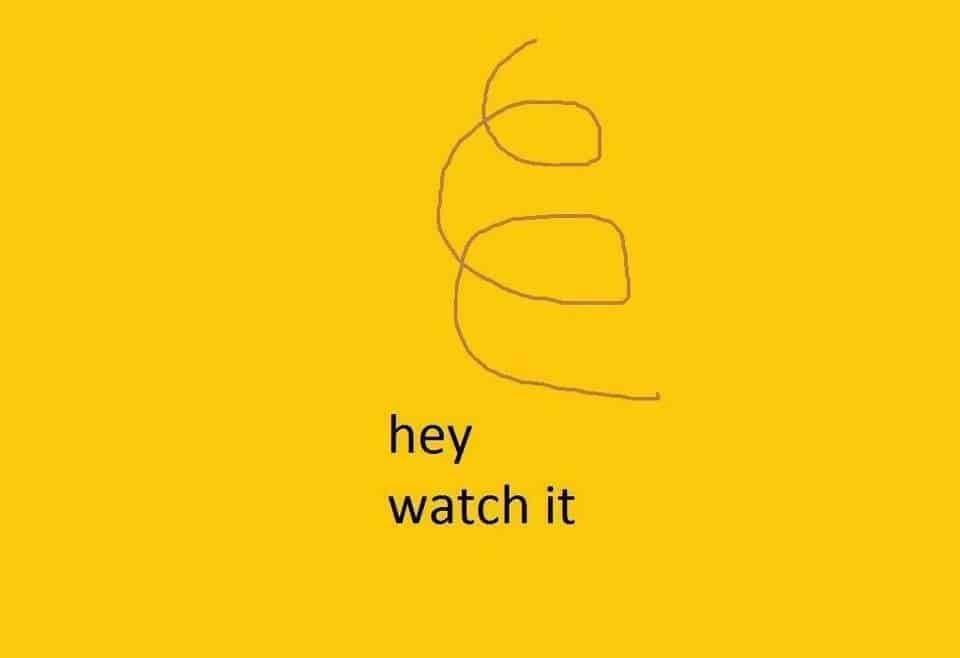 Continuing with the simple yet laughable memes of No Step on Snek, here you can see another example with just a curved line (supposed to be the snake) and saying “hey watch it”. This is just a parody of the original one trying to focus on how something this plain can still be associated with the flag. As mentioned before, No Step on Snek was based on a slang, being a parody of how is so common to pronounce words in a funny way in American English. This was a good reason to create another example of a plain meme but using the word “plese” instead of please. If you think you’ve seen enough of the simple adaptations of No Step on Snek, then you were wrong, ‘cause here’s just one that’s even worse than the others and that’s why some people find it particularly funny. You can see just a simple line as a reference of the snake with the word “don’t”, as the representation of the famous phrase in the flag. Even being something so simple is still one of the most shared via social media.

No Step on Snek Original

no step on snek

Here is the original version of the meme, complete with the design from the original flag. This is where many people took their parodies from.

Progression from Original to Meme

No step on snek from funny

A version of the meme created by a Reddit user that includes the original flag and two versions of the meme alongside snakes that would represent the drawn images.

This is one of the most popular versions of the meme that ended up circulating Reddit.

Navy students with a "no step on snek" flag from vexillology

Some Navy students at what looks like a college football game busted out the flag.

Beavis ‘Are You Threatening Me’?

No step on snek from MURICA

Another interesting rendition plays on Beavis and Butthead. In the image, Bevis is the head of the snake and he’s holding some serious firepower.

No step on snek from airsoft

Taking it a step further, the user uploaded an image of himself wearing a gun vast with some banana clips and a telltale yellow patch. You can also see that he has a coiled snake around his neck. Another interesting interpretation is this free-market, libertarian Pokémon that is captioned ‘refrain from using stomp’. We don’t know much about Pokémon here but over on Reddit people found this very funny.

The cartoon was obviously popular during the American Revolution, especially among members of the revolutionary navy. “Colonel Christopher Gadsden, after whom the flag is named, saw the design and was so impressed by it that he ordered an official flag to be created with it” (KnowYourMeme), so this is how the original flag itself began to spread in the early Americas.

Afterward, the image began to gain popularity among American patriots. This can be expected since the flag was originally associated with the American Navy. A lot of people who were in the military particularly started to use the flag, and you can still see people hanging this flag in their backyards. You may be able to assume that the person using the flag is a member or a former member of the United States military, or they may be a member of the Tea Party movement. The flag is also used by people who are fans of American soccer teams.

More recently, the flag slowly became associated with libertarianism, so don’t be surprised if you see your libertarian friends carrying the “Don’t Tread on Me” flag. The Tea Party movement, which is a libertarian party, chose the flag to be one of its unofficial symbols. So, you may also see many libertarians with this flag, too.

It is an original symbol of American patriotism since the flag was one of the first independent American flags.

However, the flag started to be used as a symbol of mockery by people who were opponents of libertarianism. A lot of people began to make parodies of the flag in an attempt to make fun of libertarians.

Around 2015, people began to use the term “snek” as a funny slang term for “snake.” This was originally supposed to be a mockery of libertarians, but of course, not everyone who uses the term anymore is against libertarianism or patriotism, for that matter; they just think it’s funny. Then, people started to make parodies of the flag with the phrase “No Step on Snek,” and that’s where the popular meme was born. Some of the websites where this meme became popular on included Tumblr, Reddit, 4Chan, and others.

A lot of people began to take the flag and make parodies of Taylor Swift back in 2016 after some people who were not fans of her started to call her a snake. Overall, there have been a lot of funny and popular versions of the meme that have circulated the Internet.

If you’re someone who is into memes, you’ve probably already come across the popular “No Step on Snek” meme that’s been everywhere on the Internet. It might seem at first sight like something funny, and incorrect grammatically speaking (it should be named as “Don’t step on a snake”), but when you get to know the backstory of this meme, you find something quite interesting and even antique.

This meme is related to the “Don’t Tread on Me” flag used by the revolutionary American Navy. The flag, officially known as the “Gadsden Flag”, is a reference to how the American revolutionaries decided to declare their independence from the British Empire.

However, over the years, the flag was associated with libertarianism too, so you’ll probably see libertarian allies carrying the “Don’t Tread on Me” flag. Finally, in 2015, people began to use the word “snek” as a funny slang for “snake”, supposedly to mock of libertarians. But nowadays, this meme is simply used as a parody of the flag.

The 24+ Funniest England Is My City Memes