Are you a Magic: The Gathering fan? If so, you’re probably familiar with many of the Reddit forums that specialize in the game. However, there are actually a bunch of niche subreddits dedicated to this phenomenally popular card game. We’ve curated a list of some of the best options below- check them out and join up for niche, MTG goodness.

I mean, he kind of has a point… from r/magicTCG

A subreddit for sharing artwork from the fantasy card game Magic: The Gathering.

This Magic subreddit is “related to the financial aspects of Magic”.

high effort meme for ya from r/mtgfinance

This Magic the Gathering subreddit is dedicated to “The serious, play-to-win side of the Magic: The Gathering community.”

This subreddit focuses on “anything concerning the new Magic Arena series!”

A subreddit dedicated to the discussion of the Magic: The Gathering’s Modern format!

What Modern is all about from r/ModernMagic

This Magic The Gathering Deckbuilding subreddit was “created for the discussion of Magic the Gathering decks, ideas, card combos, and strategies.”

This Magic the Gathering: Legacy subeddit is dedicated to the “discussion on Magic: the Gathering’s Legacy (Type 1.5) format, decks, cards, tournaments, etc.”

How to Beat Legacy Reanimator from r/MTGLegacy

This subreddit describes itself this way: “EDH/Commander is a Magic:The Gathering variant format which emphasises social interactions, interesting games, and creative deckbuilding. It can be played 1-on-1 but is usually multiplayer.”

Completely hose one opponent with this terrible combo! if only these cards had more functional reprints… from r/EDH

This MTGO subreddit is dedicated to the discussion of “anything related to Magic: The Gathering Online”.

Anyone else run into this guy? from r/MTGO

This Casual Magic: The Gathering subeddit was created for “players who do not necessarily want to, or are not able to play competitively, and wish to discuss playing MTG for the sake of simple fun. Feel free to talk about your bizarre homebrew decks, ridiculous combos, or just general Magic related discussion that is not geared towards tournaments and/or competitive play. Have fun.”

According to the subreddit’s description, this frugal forum says that “Magic: The Gathering does not have to be expensive. Budget Decks is a subreddit designed to discuss playing Magic: The Gathering in any format or play style on a budget. Discussion may include budget decks of various price ranges and formats, competitive to casual or various cost cutting topics and cheap alternate formats.”

Mtg: 5 Decks for $5 Each – Guilds of Ravnica Edition! – YouTube from r/budgetdecks

If you love memes, Magic Memes is a great subreddit for you. They describe themselves as a place “For all those meme thoughts about magic that you could never post.”

In this Magic: the Gathering Trading Post, the subreddit lets you “Buy, sell and trade all things Magic.”

XMage is listed as “An Open-Source Magic: The Gathering client”.

Inside the subreddit, they describe it as a “community focused on XMage and the community that keeps it thriving.”

Honestly as inactive as this sub is, its great. from r/XMage

Finally accomplished a long-term goal of mine: to obtain original set foil Fetches and Shocks for my Cube! from r/mtgcube

This subreddit describes itself as “Showing the cards that matter”.

Decided to buy a Journey into Nyx pack! God Pack! from r/MagicCardPulls

The Old School Magic The Gathering subeddit is described as “celebrating and re-living the early days of the Magic: the Gathering trading card game.”

Is this old school? Hanging out with Richard Garfield at early Pro Tours from r/oldschoolmtg

What’s It All About 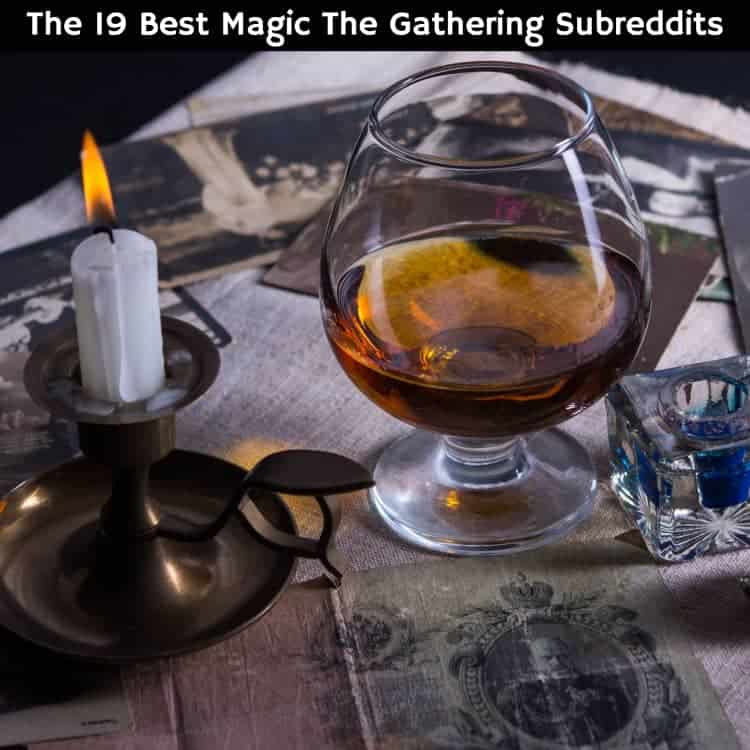 Are you curious what is Magic The Gathering? It’s a collectible card game that is also commonly abbreviated as just MTG. It was first brought to the market back in 1994 by Wizards of the Coast, sometimes just called WOTC. Since then, the game has earned a very passionate following, with millions of players having picked it up at one point or another. Many just play the game socially, but many card and collectible shops also run tournaments on a regular basis, and there is even a constantly touring series of professional tournaments where players can compete for actual cash prizes.

As a bit of a tangent, if you want to promote your Magic content on social, try out some of these popular hashtags:

The game is sometimes unfortunately confused with Dungeons and Dragons, although the confusion has something to do with the fact that both games involve elements of fantasy, magic, dragons, and the like. Some people also confuse it with doing actual magic shows, as players might say they have a ‘Magic tournament’ this weekend, and someone unfamiliar with the game might think they’re going to a talent show for actual aspiring stage magicians. The one game that it might actually be very similar to is the Pokemon collectible card game, as many young players from that game move up to Magic The Gathering when they’re older.

The story behind Magic The Gathering is that it’s a game of two wizards casting spells in a battle against each other. Land cards called mana come in the form of mountains, islands, swamps, plains, and forests, representing the five colors in the game. From these land cards, each player/wizard is able to call up the mana they need to cast their magic. They can summon creatures to put on the battlefield as well as artifacts and enchantments.

In most formats, each player has a deck of at least 60 cards and 20 life. The first player to go to zero life or run out of cards loses the game. Each deck can only have four copies of a particular card, except for basic lands. Decks are usually based around one particular color or perhaps an adjoining pair. The backs of cards all have the same Magic The Gathering logo on them so that an opposing player doesn’t know what cards are in the other player’s hand until they are cast.

There is also an online version of Magic The Gathering. Players who earn cards digitally can sometimes trade them in to get a full physical set.

For people that are obsessed with this trading card game, finding a forum to share your passion with is an important component of gameplay. What’s great about Reddit, there are so many different niche forums you can’t participate in. As we have seen, there are forums where you can post funny Memes, forums for inexperienced players, and even a space for frugal players to play competitively without spending a lot of money.

Many of our writers live in Brooklyn and you can easily find card game shops in the neighborhood that sponsor local events and tournaments. However, not everyone has access to large metropolitan areas with dedicated space for gameplay. That’s why it’s great that Reddit can provide a passionate forum for players to convene and discuss the game.

The game is definitely trending in popularity- a recent article we read celebrated 25 years of the game that seems to still be going strong. Indeed, if you check out these subreddits, you’ll see that the most popular ones get a lot of community activity and have huge subscriber counts.